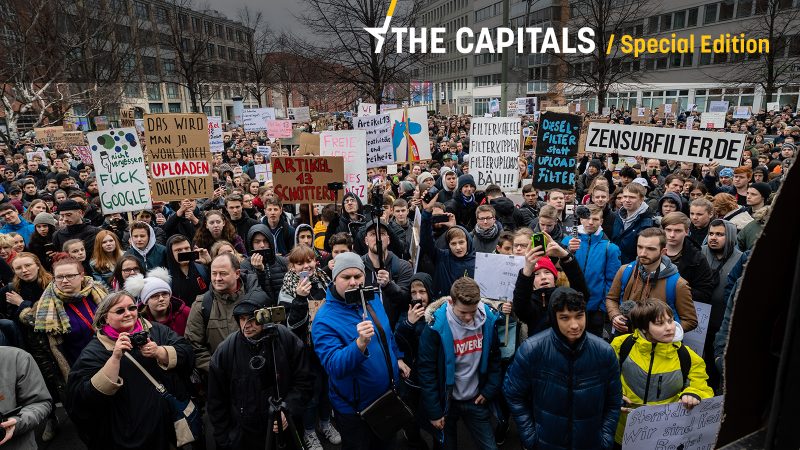 Welcome to a Special Edition of The Capitals, EURACTIV's daily newsletter.

The EU’s copyright directive, which aims to provide legal protection and remuneration for content creators online, was adopted in April of this year and member states are now required to transpose the reforms into national legislation by June 2021.

So far, France is the only country that has transposed the right for press publishers to seek remuneration, from the copyright reforms, into national legislation. The move has provoked a heated response from the platform industry with Google recently announcing technical changes to their news-display service, avoiding the legal obligation to pay press publishers for the content they create under the new rules.

In a pan-European survey, EURACTIV has been talking to national governments to obtain an understanding of how future transpositions of the directive are likely to play out, and whether or not the platform industry’s response to the plans could deter member states from implementing the Copyright Directive.

After thousands of people took to the streets to protest against the copyright directive, the German government, which had supported the plans, has taken a step back, releasing a protocol declaration, stating that by implementing the directive, “the goal is to make the instrument of ‘upload filters’ largely unnecessary”.

Until September 6th, the Ministry of Justice held public consultations on how to implement the regulation (opinions here). Since then, the ministry has been working on a concept for implementation but it still remains unclear how ‘upload filters’ could be avoided.

On the day the directive was passed, the German government declared the reform would deliver “necessary adaptations to the outdated European legislative frame”. The government expressed its hope that talks about the implementation would be “driven by the spirit to ensure an appropriate remuneration of the creative”, as well as to “ensure freedom of expression and to protect user rights”.

Currently, the Ministry of Justice and Consumer Protection is evaluating comments received during a public consultation phase concerning further implementation. “We are also very attentive to the directive’s implementation in other member states,” a spokesperson of the ministry told EURACTIV.

However, the resistance in Germany has been strong, with large-scale protests taking place. The Pirate Party have been the strongest opponents to the plans. The Pirates’ political director, Daniel Mönch, has recently spoken out:

“Google can dispense the contents of the publisher without major disadvantages for its own business…It’s not just about bonuses for the heads of the largest publishing houses, but also about the future of tens of thousands of large and small media companies, many of whom rely on Google’s offerings. The copyright experiment must be stopped in order to avoid further damage to the European digital market. “

Alexandra Geese, MEP from the German Greens, argues along similar lines and calls for new solutions. “It is absurd to try to make American platforms solve the financial problems of the media houses,” ​​she said. “I hope that in Europe, we will develop our own creative models in the future to finance media offerings. I can imagine a European platform for that. “

Oliver Süme, chairman of the internet economy association, has also weighed in: “The new copyright directive achieves the opposite of what has repeatedly been stated as the objective of the directive. Instead of the actual authors, it is the big collecting societies and press publishers as well as the large platforms that benefit from it”.

“The copyright directive has the potential to change the Internet as we know it forever,” Süme warned.

France was the first EU country to transpose the copyright directive into French law, which will enter into force on 24 October and will allow online publishers to demand remuneration for the use of their work on online platforms, through the creation of a “neighbouring right”.

However, Google announced on 25 September that it will take measure to comply with the new law, but won’t pay a penny to online publishers. The announcement was strongly criticised in France, both by publishers and the government. “This decision, which did not give rise to any exchange or consultation, appears to be a real circumvention of the spirit of French law and, more broadly, of the European directive”, protested the French general press Alliance. “Google’s statements on the issue of compensation are not admissible,” Franck Riester, France’s Culture Minister also said.

EURACTIV recently caught up with government officials from the UK’s Intellectual Property Office, the department in charge of copyright legislation, to find out about their stance on the directive in the midst of ongoing Brexit negotiations.

“The Government supported the goals of the EU Copyright Directive throughout its negotiations,” the official said, adding that the UK wants to see fairer rewards for creators in the online ecosystem.

Interestingly, the UK’s Intellectual Property Office is working towards the timeline set out in Theresa May’s Withdrawal Agreement, on the assumption that there will be a transition period which concludes at the end of 2020. The fact that the Copyright Directive must be implemented by 7 June  2021, which “falls outside the initial implementation period provided in the Withdrawal Agreement,” means that the Copyright Directive will not be transposed into UK law.

However, would the UK consider its own version in the future? The official told us that “the Government will consider such policy questions in due course.”

“Internet giants will cease to obtain profits at the expense of content protected by intellectual property rights that they distribute without remunerating their creators,” sources from ADEPI, the Spanish Association for the Development of Intellectual Property, told EURACTIV Spain recently. “The directive must be transposed no later than 7 June 2021, but it would be advisable to do so as soon as possible”.

More broadly, the ADEPI informed EURACTIV that there is little resistance to the Copyright Directive in Spain, citing the fact that all parliamentary groups approved the reform of the Intellectual Property Law last February. A spirit of collaboration presided over the works in both parliament houses, treating the intellectual property law as an essential text to develop cultural and creative industries.

The ADEPI views copyright as “a great step forward towards balance in the commercial exploitation of online content, allowing creators to receive fair remuneration for the use of their works on internet platforms. It can always be improved, especially regarding the responsibility of the platforms.”

In Poland, the Ministry of Culture and National Heritage (MKiDN) is responsible for the implementation of the Copyright Directive. Minister Piotr Gliński recently pointed out that “some articles (…), especially those concerning content filtering (Article 17; ed.) – threaten internet freedom and are contrary to the basic values ​​of the EU regarding freedom of speech, ideas and creating new content”.

In turn, Deputy Minister of Foreign Affairs Konrad Szymański said that “this shape of the directive may result in the need to adopt regulations that will be analogous to preventive censorship, which would not only be prohibited under the Polish Constitution but also under EU treaties”.

Poland is in no hurry to transpose the directive. According to Kuba Jankowski, an expert in copyright law, “the implementation of the directive requires amendment of the law because many of the provisions are new to Polish legislation,” and therefore, the country may wait until the final few months before taking steps to transpose the necessary measures into national law.

Recently, the ‘Together for Culture’ initiative – supported by several dozen Polish artists, including Oscar winner Jan A.P. Kaczmarek – have called for support for the EU directive. The authors are in favour of “balancing the reign of large transnational giants and opposing their activities to the local creative industry so that creators can receive fair remuneration for sharing their work on YouTube, Facebook or other large platforms.” Jan Młotkowski, head of the ZAiKS (Polish Society of Authors and Composers) communication department, has also backed the plans, telling citizens that “freedom on the Internet will be when people are not robbed”.

Earlier this year, the EU’s Copyright Directive caused much controversy in the country. During the EU Parliamentary election campaign, PiS and its supporting media argued that it was “ACTA 2”, a law that could “contribute to taking away freedom on the internet”.

PiS MEPs, Tomasz Poręba and Jadwiga Wiśniewska argued in March that a vote in the EU elections was a vote “for or against censorship on the internet”, and Prime Minister Mateusz Morawiecki said on 7 September that the country was due to take appeal against the directive at the European Court of Justice (Poland belonged to a group of five countries that did not support the law at the EU Council).

The State Intellectual Property Office has been put in charge of carrying out the Copyright Directive in Croatia. So far, they have formed the working group of national experts, which will be responsible for adjusting the directive to Croatian laws.

The group is expected to meet for the first time by the end of the year. The official website of the office in charge has published a document which enables citizens to be informed about the procedure and its impact. The official position of the Croatian government is that the Copyright Directive will be beneficial for the creative community in the digital era.

Just ten days ago, Greece’s culture ministry assembled a legislative committee to prepare a draft law on the implementation of the copyright directive (along with others, 2017/1564, 2019/790, 2019/789) with a deadline at the end of June 2020. At that time, the political decision will be made if and when the government will go forward with the bill and the exact provisions it will enact, meaning that it could take a lot more time to table the bill to parliament.

Sources told EURACTIV Greece that since the country does not host any company with major web platforms, the main focus will be not to create any unnecessary problems with the press. Indeed, three ministers recently met with a major journalists association and promised to take into account their proposals for the implementation of the directive.

Bratislava currently does not see much scope for taking further measures outside the scope of the directive, as it “touches almost all aspects of copyright“, a representative from the ministry told EURACTIV Slovakia.

The Association of European Journalists, an active group in Slovakia, welcomed the proposal of the new legislation. “It is necessary to adopt a norm that would distract the fears of possible censorship of the internet and filtering its contents,” said Tibor Macak, Secretary-General of the AEJ and Slovak radio journalist in January.

So far, the Czech ministry of culture has begun a stakeholder communication process, by which the text of the directive has been divided into nine parts and stakeholders have been asked to tell which parts they want to propose amendments to.

“We had a meeting at the ministry in August where we communicated our opinions. Nothing else has happened so far,” Václav Mach, director of the Union of Publishers, told EURACTIV Czech.

Nonetheless, the directive has sparked emotional discussions and the legislative process is likely to be difficult.

“We criticise the considerable uncertainty of the terms in the text and we do not agree with any further changes beyond the directive at this time,” Věra Průchová from the Czech search engine and publisher Seznam.cz recently said.

Historically, Bulgarian authorities have always transposed European legislation at the last possible moment, and sometimes after the deadline. This is what happened with the GDPR in 2018, which was introduced through Bulgarian legislation with a delay of more than six months.

“Bulgaria is taking part in meetings in Brussels, and the work on implementing the directive is still in its early stage,” the Ministry of Culture said. Authorities are yet to gather information on the public’s views on the directive and hold stakeholder meetings. The procedures are likely to start in the middle of next year.

The ministry adds that Bulgaria participates in the European Commission’s copyright contact committee, which supports the process of implementing the directive.