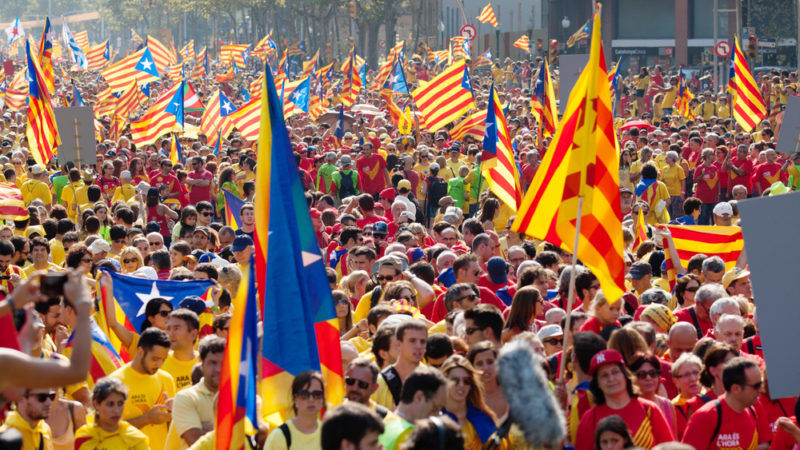 Catalans will be asked on 1 October if they want to remain part of Spain or not. [Iakov Filiminov/ Shutterstock]

Catalan president Carles Puigdemont revealed that the region’s 7.5 million inhabitants will be asked ‘Do you want Catalonia to become an independent state in the form of a republic?’ on 1 October.

The central government in Madrid dismisses the plan as illegal and unconstitutional and has pledged to take all necessary measures to prevent it.

The last resort is widely believed to be Article 155 of the Spanish constitution, under which the regional government’s authority could be suspended.

In his Friday statement, Puigdemont said the referendum is the “legitimate right of a millennial nation” and confirmed that his government would enforce the result of the vote.

The Catalan leader also highlighted that seven years ago the Spanish Constitutional Court (TC) rejected the reform of the Statute of Autonomy of Catalonia, which had been approved by the region’s government and passed by referendum in 2006.

Since then, attempts at a dialogue between Catalonia and Madrid have been strained.

This announcement confirmed Catalonia’s intention to unilaterally pursue independence, after the government of Prime Minister Mariano Rajoy refused to negotiate on the issue.

The TC has already struck down a formal attempt to resolve the sovereignty issue by the Catalan government in November 2014. An informal, non-binding referendum was held instead and a low turnout resulted in an overwhelming ‘yes’ to independence vote.

It was organised by volunteers rather than government officials and a Spanish court banned Puigdemont’s predecessor, Artur Mas, from holding public office for two years.

One response to “Catalonia sets 1 October for independence vote”