China opens a ‘diamond period’ in the Balkans 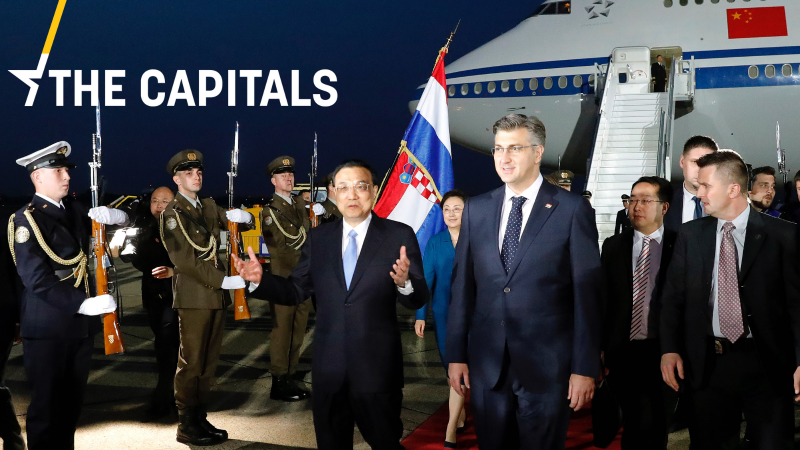 The Capitals is EURACTIV's daily newsletter from across Europe. [EPA/ANTONIO BAT]

ZAGREB: Chinese Prime Minister Li Keqiang has visited Zagreb before the “16+1” summit in Dubrovnik today. “We will import more Croatian products that suit Chinese consumers and encourage a more balanced trade,” Li said after a meeting with his Croatian counterpart Andrej Plenković. “Although we are geographically distant, we are willing to bring our hearts closer together and open a diamond period in our relations,” he added.

Currently, the annual trade between the two countries is at €1 billion, while last year around 250,000 Chinese tourists visited Croatia. The next major projects will be the modernisation of the Zagreb-Rijeka railway and Croatian seaports. “We are ready to increase the synchronisation of the One Belt, One Road initiative with Croatian development strategies,” Li added.

Croatian Minister of Economy Darko Horvat announced that Chinese companies were offered to construct the Zagreb-Rijeka railway line while the European Commission told Croatian television N1 that it was not informed about the project. Croatia’s agriculture ministry also said the door to the Chinese market was opened for Croatian milk and dairy products after signing a joint protocol on veterinary and public health standards for dairy products.

Croatia’s Central State Office for the Development of Digital Society and the Chinese telecommunications giant Huawei signed a memorandum aimed at encouraging cooperation in digitisation. The memorandum provides for continued communication and stronger cooperation between Huawei and Croatia in developing “smart city” solutions, exchanging expertise, industrial standards and using the possibility of attending conferences and seminars on digital technologies in Croatia and in China.

“Such an Italian decision, which foresees Chinese investments in Italian ports, could jeopardise the Slovenian port of Koper”, Cerar said. He didn’t directly refer to Trieste but there is a conflict between those two ports as to who should be a leader on the Eastern Adriatic coast.

SARAJEVO: About 50 Chinese companies dominated this year’s Mostar (city in BiH) Fair exhibition. They are mainly computing, information technology, biotechnology and energy companies. “China is at the top of the world in terms of high-speed rail transport. We wanted to present our fast train in this Fair so that people in BiH know more about these trains and about our company,” said Hu Wenjin from China Railway.

New Brexit date: EU leaders have agreed on a new date of October 31 for the UK’s departure from the EU. The extension, EU Council President Donald Tusk said, is shorter than he had expected. EU member states had been divided as to the length of any prospective extension period, with the new date being seen as a victory for France’s Emmanuel Macron, who had been vying for a shorter extension.

Into the early hours of Thursday morning, UK Prime Minister Theresa May maintained that the extension was ‘flexible’ so that the UK could leave when it ratifies the Brexit plans in parliament. (Samuel Stolton, EURACTIV.com)

The IMF warns Spain about its public debt: The International Monetary Fund (IMF) ηασ warned Spain and other countries about its high level of debt, EURACTIV’s partner EFE media reported.“Economies with high debts should apply gradual fiscal adjustments (Canada, France, Japan, Spain, UK, US), especially with a view to keeping fiscal balances within the levels in those that the debt stabilises, unless there are signs of a severe economic recession,” IMF’s director Christine Lagarde said. (EuroEFE.EURACTIV.es)

No other taxes: Speaking on the sidelines of the EU Council, Italy’s PM Giuseppe Conte said the government would neither raise the VAT nor introduce a new wealth tax. According to him, the reason why the growth forecast was trimmed from 1% to 0.2% is due to the international economic situation.

Power from bicycles: Greta Thunberg, the famous teen climate activist, will be in Rome next Friday for one of her global school strikes. Environmentalists are organising a big zero emission event, powered with 12 kW generated by bicycles ridden by 128 volunteers.(Gerardo Fortuna, EURACTIV.com)

Cannabis investments: State authorities have already approved 5 investments in pharmaceutical cannabis production while 43 have applied for licenses. If all investments proceed according to the plan, they will create more than 2,800 new jobs with more than half a billion euro invested capital. (Theodore Karaoulanis, EURACTIV.gr)

Orbán influenced the composition of the panel, which is supposed to evaluate him: Slovak ex-PM and President of the EPP think tank Wilfried Martens Centre Mikuláš Dzurinda said he was supposed to be the fourth member of the EPP committee that will evaluate the situation in Hungary after the suspension of Fidesz´s membership.

“Before the political gathering of EPP, Fidesz voiced dislike to my nomination,” Dzurinda said in an interview. He then proposed the EPP to withdraw his nomination. The other three members of the committee are H. Van Rompuy, H.-G. Pöttering and W. Schüssel. (Zuzana Gabrižová, EURACTIV.sk)

Unacceptable cuts in CAP and cohesion funds: Konrad Szymanski, a deputy foreign minister, said, “the European Commission’s proposal regarding the future EU budget is unacceptable for Poland and for many other countries. The cuts in the CAP and cohesion funds are simply inadequate and disproportionate. We can have a reasonable discussion about the budget, but in the end, it must be more balanced.” (EURACTIV.pl)

Another minister leaves the government: “PM Andrej Babiš informed me about a planned change of the Industry and Trade Minister,“ incumbent minister Marta Nováková, who took the office in June 2018, said yesterday (10 April).

Nováková faced fierce criticism after she claimed that Internet data would be cheaper if people increased their usage. She also took part in a diplomatic “faux pas” after a Taiwanese diplomat was forced to leave a meeting of ministry officials with foreign investors at the request of the Chinese ambassador. It’s the second resignation in a week after Transport Minister Dan Ťok. (Aneta Zachová, EURACTIV.cz)

Reducing migration flows: Bulgaria will allocate €200,000 in humanitarian aid to help reduce migration flows to Europe, according to a draft agreement between the country and the European Investment Bank. (EURACTIV’s partner Dnevnik.bg)

No chief prosecutor: Tudorel Toader, the justice minister, rejected all four applicants for the position of chief prosecutor. The selection committee led by Toader gave no official explanation but announced the process would restart soon. The mandate of the incumbent chief prosecutor, Augustin Lazar, will conclude at the end of April. Lazar has applied for a new mandate, despite Toader previously asked for his dismissal. (EURACTIV.ro)

444 guilty verdicts in the fight against corruption: During one year of implementation of the Law on Organisation and Competencies of State Bodies in Suppressing Organised Crime in Serbia, 448 verdicts for terrorism and corruption were made, 444 of which were found guilty. In the same period, there were over 10,000 reports, which the prosecutors’ offices had to consider, and 681 persons were indicted. (Beta-EURACTIV.rs)