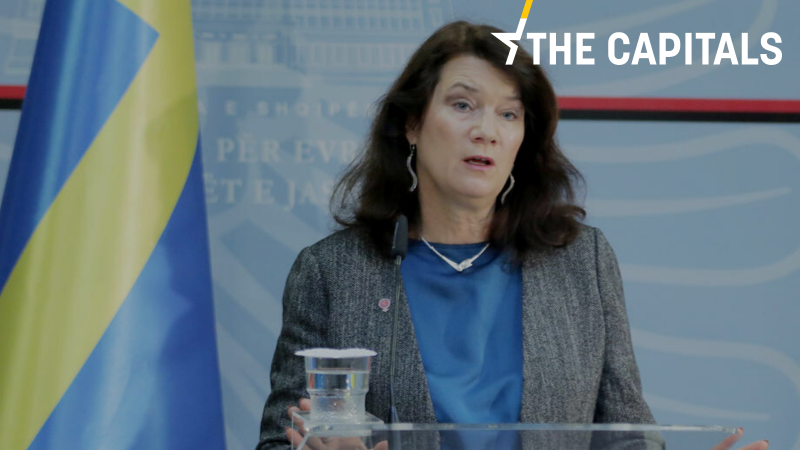 Before you start reading today’s edition of the Capitals, we invite you to read “Investing in consumer ‘proximity’ to produce biodiesel from UCO“.

China putting pressure on Swedish media. Seven out of the country’s eight biggest newsrooms said that in the last two years the Chinese embassy had contacted them and criticised their content on China, according to a survey conducted by Swedish national television.

News outlets considered too critical have received emails and phone calls from the embassy and some journalists have been invited to discussions to learn about the official – and “correct” – state of affairs in China.

The survey has now caused a diplomatic row between the two countries. EURACTIV’s Pekka Vänttinen reports.

Words of warning from the IMF. In its yearly report, the International Monetary Fund (IMF) describes the Finnish government’s programme and the country’s economic outlook as “challenging” because of the country’s economy faster slowdown and belated structural reforms. But what policies, in particular, are contributing to these trends? EURACTIV’s Pekka Vänttinen reports.

Maas rolls back call for re-starting Operation Sophia. On the heels of the Berlin Conference on Libya yesterday (20 January), Foreign Minister Heiko Maas (Social Democratic Party) called for restarting talks on the EU’s now-boatless marine operation Sophia, only later to claim he first wants to focus on solidifying the fragile ceasefire.

>>Read also: EU’s intention to use a revamped ‘Operation Sophia’ to enforce a Libyan arms embargo

In a Sunday night interview on the talk show Anne Will, Maas criticised the status quo, saying it was contradictory to decry the conditions in Libyan refugee camps, while simultaneously returning people to the country. However, by Monday evening, he began to roll back those statements, emphasising that it is now a matter of “turning the fragile ceasefire we have into a ceasefire first.” (Sarah Lawton | EURACTIV.de)

Kurz wants to tighten rules for unemployment benefits. Chancellor Sebastian Kurz (ÖVP) is worried about people abusing Austria’s welfare system and is calling for more effective sanctions. But what did the opposition have to say about the labour ministry’s plan to cut unemployment benefits? EURACTIV Germany‘s Philipp Grüll looks into it.

Financing the ecological transition. As the European Commission presented the global architecture of the European Green Deal last week, French Commissioner for Internal Market and Services, Thierry Breton, presented some ideas to ensure access to the €1,000 billion needed for the Green Deal. Breton touted the creation of long-term bonds, “of 20, 30 or even 50 years, which would make it possible to take advantage of low or even negative interest rates”. The European carbon tax on imported goods should also finance the ecological transition, Breton added. Read more on this here.

Miles away. Informateur Joachim Coens (CD&V) believes that together with his colleague Georges-Louis Bouchez (MR), ‘some progress’ has been made in recent days on forming a new federal government and will keep looking for possible options with the two biggest parties Flemish nationalist N-VA and Socialist PS as the two issued an interim report to the King. Former Belgian PM Elio Di Rupo, however, said the parties are miles apart: “We talk to each other, but the N-VA does not accept anything that we consider essential: higher, dignified pensions and more accessible (affordable) healthcare.” (Alexandra Brzozowski | EURACTIV.com)

Also have a look at Georgi Gotev’s Brief on the deja vu of Belgium’s region of Wallonia trying to block the EU-Mercosur free-trade agreement, just like it previously attempted with CETA.

Lording it. The government on Monday (20 January) suffered its first defeats in the House of Lords to its Brexit legislation since the December election, though the Lords’ lack of a veto means that ministers will simply ignore them. Read more.

Coveney on Brexit free trade deal. The EU won’t sign a free trade agreement with the UK unless there is “equivalence” on the standards of goods between the bloc and the UK, Ireland’s Deputy Prime Minister Simon Coveney said Monday (20 January). Sam Stolton has more.

Spain warns about ‘unfairness’ of EU’s Just Transition Fund. Spain’s Minister for Foreign Affairs and the EU, Arancha González Laya, expressed on Monday (20 January) Madrid’s concerns that the Just Transition Fund presented by the European Commission to achieve carbon neutrality by 2050 was not “fair” towards Spain, EURACTIV’s partner EuroEFE reported.

But what exactly did the minister say? EURACTIV’s partner EUROEFE has some of her quotes.

First steps towards a ‘Salvini trial’. A committee in the Italian Senate has formally authorised an investigation into Lega’s Matteo Salvini over allegations of kidnapping migrants who weren’t disembarked from the Italian coast guard ship Gregoretti in July. Right-wing Lega’s lawmakers voted to waive Salvini’s immunity, as requested by their leader who said he wants to face trial. It will be up to the full house to decide on lifting Salvini’s immunity in February. (Gerardo Fortuna | EURACTIV.com)

Friends of Cohesion. Portugal’s Prime Minister António Costa invited leaders of the “Friends of Cohesion” countries to a summit in Portugal on 1 February, which aims to strengthen the position of member states against cuts in the Cohesion Policy in the EU’s next multiannual budget (2021-2027).

A source in the prime minister’s office pointed out that the “Friends of Cohesion” are committed to moving forward in the calendar of negotiations on the EU’s financial framework for 2021-2027.  André Campos and Ana Matos Neves from Lusa.pt have the full story

In other news, members of Portugal’s police forces are holding protests in three cities simultaneously this Tuesday in an event called by unions, who want to organise such protests each month. The police are demanding for the payment of a risk subsidy, a salary increase, salary supplements, laws related to hygiene and health, a staff increase, as well as more and better personal protection equipment. (Célia Paulo, Lusa.pt)

What’s happening with Spain? A high-ranking diplomat told EURACTIV.com yesterday that Athens needs to have closer relations and better communicate with Spain as the latter provides Turkey with war aircraft manufacturing know-how amid escalating Athens-Ankara tensions. “In a family, members need to talk to each other. They cannot support each other’s enemies”.

Two more presidential candidates. Two more politicians announced that they will be running in the country’s presidential elections set to take place in May 2020. EURACTIV Poland’s Łukasz Gadzała reports.

Worst-case scenario. Given the right circumstances, the far-right People’s party our Slovakia (ĽSNS) could win the February elections. Currently, the party is second on 13.6% behind the ruling SMER party on 18.7%. Newly released data shows significant potential for growth for L’SNS. (Zuzana Gabrižová | EURACTIV.sk)

Transport Minister fired. Transport Minister Vladimír Kremlík has been fired due to an overpriced tender to operate new electronic vignettes across the country’s motorway. The €16 million contract has attracted criticism from the opposition and from PM Andrej Babiš, who later admitted that the tender had been poorly managed. A group of Czech IT experts already offered that they would program the e-vignettes system for free during this weekend’s public hackathon. (Aneta Zachová | EURACTIV.cz)

Rethink of Maastricht criteria needed. The governor of the Central bank, György Matolcsy, has said the eurozone needs a “rethink” and that a dialogue on ways to reform the Maastricht criteria, which member states must meet to adopt the euro was desperately needed.

Hungary has been on a path of sustainable convergence since 2013, with economic growth averaging 3.8%, two percentage points above the eurozone average, Matolcsy said. GDP per capita is at 73% of the EU average and public debt is expected to drop below 60% of the GDP by 2022, he added. (Željko Trkanjec | EURACTIV.hr)

In other news, the government lost to the Hungarian joke political party before the European Court of Human Rights. On Monday (20 January) the European Court of Human rights in Strasbourg ruled against the Hungarian government for fining the Two-Tailed Dog Party, for breaking rules on fair elections and voting rights during the 2016 national referendum on EU refugee quotas.

But what is the context behind the Court’s decision? EURACTIV’s Vlagyiszlav Makszimov takes a look at the case.

Domestic violence. In 2019, 25 in 80 homicide victims in Bulgaria were women, according to interior ministry statistics made available to Dnevnik. Two-thirds of them were killed by their spouses, intimate partners or relatives, with the main motive being jealousy. In early 2019, after the Constitutional Court rejected the Istanbul Convention on preventing and combating violence against women and domestic violence, parliament adopted amendments to the Penal Code that make domestic violence a crime. (dnevnik.bg)

No turkey from Hungary. The meat of turkeys slaughtered at a plant in Hungary, which later confirmed it contained the avian influenza virus of subtype H5N8, has also entered Slovenia. The country’s Food Safety Authority has notified companies Kvibo and Panvita, which have already begun the process of withdrawing the meat. (Željko Trkanjec | EURACTIV.hr)

PM’s party tops polls. According to the Vox Populi survey, PM Marjan Šarec’s centre-left LMŠ party enjoys the most support public support at 19.4%. The opposition party, the Slovenian Democratic Party (SDS), came in second with 16.9%, while the Social Democrats (SD) got 8.1%. DeSUS, the party that got a new president on Saturday, polled only 2.9%. (Željko Trkanjec | EURACTIV.hr)

‘Don’t go down the same path as Poland and Hungary’. MEP Iratze Garcia Perez, the chair of the S&D Group in the EU Parliament, is asking the Romanian government to stop its plans to change the electoral legislation ahead of new polls.

“The EPP Romanian government should take note of the Venice Commission, which prohibits changing the electoral law one year ahead of the elections,” Perez tweeted. “Don’t go down the same path as Poland and Hungary undermining rule of law!” she added. But what prompted Perez’s reaction? Bogdan Neagu from EURACTIV.ro looks into it.

EBRD chief says Croatian banks are too conservative. In an interview with novac.hr, EBRD president Suma Chakrabarti said the country’s tourism sector has been successfully addressing the issue of seasonality but has been doing less well in the business sector. With institutions that are not yet fully developed and a fragile judicial sector, investors will think twice before investing there. According to Chakrabarti, Croatia should focus on making sure its banks are less conservative as these are “full of money but do not lend”. (Željko Trkanjec | EURACTIV.hr)

In other news, the pop singer Miroslav Škoro, who came third in the presidential elections with 24.5% of the votes, told jutarnji.hr. that he will be in parliament too. EURACTIV Croatia’s Željko Trkanjec breaks down some of his main ideas for you.

Extradition from Belgium. Belgium has extradited a Bosnian national who was linked with terrorist attacks in Paris in 2015 back to Bosnia and Herzegovina, the Dnevni Avaz daily report. EURACTIV Croatia’s Željko Trkanjec summarises the case.

More than 420 fathers on paternity leave. Although Montenegro has an image of a patriarchal country, over 420 fathers used paternity leave last year (Montenegro has around half a million inhabitants), compared to 199 fathers who had been on leave the year before. “You couldn’t see a man pushing a baby carriage thirty years ago. It seems to me that fathers were less involved in what was real family life. It’s not like that now and a lot has changed,” said psychologist Adriana Pejaković. (Željko Trkanjec | EURACTIV.hr)