Commission: Breton not involved in EU tender won by his former company 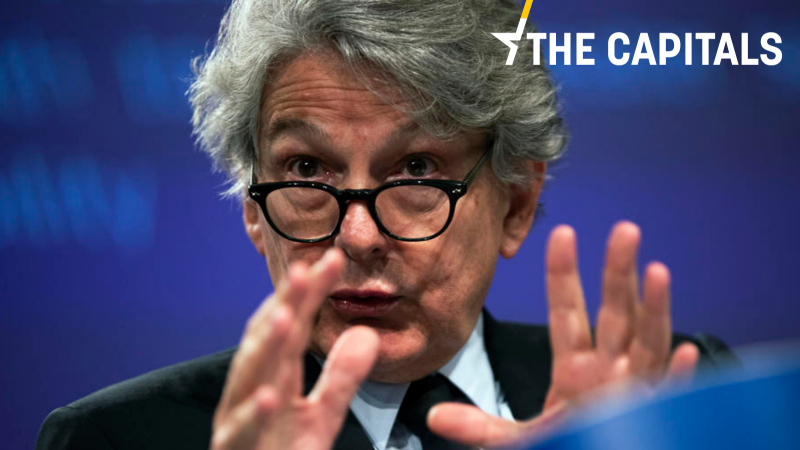 EURACTIV asked the EU executive if it finds it politically and morally acceptable that a day after Breton was appointed as Internal Market Commissioner, a tender was launched, which was ultimately won by the company he had worked for until just a month before. [EPA/ FRANCISCO SECO]

Before you start reading today’s edition of the Capitals, feel free to have a look at Coronavirus second wave prompts virtual EU summit.

Breton not involved, Commission says. EU Commissioner Thierry Breton was not involved in the decision on the launch or the evaluation of the supercomputer tender won by Atos, of which Breton was CEO just before he became a Commissioner, an EU spokesperson told EURACTIV.

“Following the commitments made during his hearing, and President Ursula von der Leyen’s decision in this regard, Commissioner Thierry Breton was not involved in the decision on the launch or the evaluation of this tender. Thus, the Commission sees no ground for political or moral concern,” an EU spokesperson said.

EURACTIV asked the EU executive if it was politically acceptable that a day after Breton was appointed as Internal Market Commissioner, a tender was launched, which was ultimately won by the company he had worked for until just a month before.

See here the background of the story and how the European Commission replied.

German health minister tests positive for COVID-19. Germany’s Health Minister Jens Spahn (CDU) tested positive for the coronavirus on Wednesday (21 October). He has gone into self-isolation and currently is only displaying cold-like symptoms, according to a statement from the ministry’s spokesperson. Read more.

More COVID-19 curfews to come. Several French departments will fall into the “high alert” category and will have to impose curfews following the press conference on Thursday afternoon where Prime Minister Jean Castex and Health Minister Olivier Véran are set to announce the new measures. Read more.

Hard-hit Belgium faces second COVID-19 lockdown. Belgium could order another lockdown to curb the spread of COVID-19 infections as early as next week, a spokesman said on Wednesday (21 October), as the country grapples with a new wave of the virus potentially as serious as this spring. Read more.

New measures to curb COVID-19 infections. New regulations with measures to curb the rising number of infections will be published on Thursday. In public spaces, a maximum of six people will be allowed to gather indoors, while up to 12 will be permitted to do so outdoors. Austria recorded its largest 24-hour-increase from Tuesday to Wednesday as it identified 1,985 new coronavirus infections nationwide. (Philipp Grüll | EURACTIV.de)

UK-EU Brexit talks restart with just weeks to seal deal. Britain and the EU will resume fraught post-Brexit trade talks on Thursday after seven days lost to threats and brinkmanship, and with just weeks left to salvage an agreement. Read more.

Lazio region imposes curfew. Italy’s region of Lazio adopted a curfew that will run from midnight to 5am starting Friday, following in the steps of Lombardy and Campania, two regions that already ordered similar measures to come into effect this week. Read more.

Spanish government mulls curfews as Spain passes 1-million-mark. Spain’s government said it was mulling the possibility of introducing night curfews across regions with high coronavirus infection rates as Spain recorded more than 1 million COVID-19 cases and 34,366 related deaths since the start of the pandemic At the same time, citizens of Madrid are once again confused by the contradictory messaging from national and local authorities regarding the extra measures that are to be taken before Friday to contain the virus, EFE reported. Read more.

In other news, the impact of the COVID-19 crisis on Spain’s tourism sector -which accounts for almost 14% of the country’s total GDP – was defined as a “tragedy” on Wednesday (21 October) by EXCELTUR, the largest alliance of Spanish tour operators. EXCELTUR predicts a loss of €106,159 million in 2020, a drop of almost 70% compared with 2019, EFE reported. (EUROEFE WITH EPA)

‘Green light’ for state control of TAP Air Portugal. Portugal’s Competition Authority has approved an increased state-owned stake in the Portuguese flag carrier TAP, with the acquisition of 22.5% of the company’s capital, in addition to the 50% already held by Parpública, the state investment management company. Read more.

Greece ‘shocked’ by 865 new COVID-19 cases. Greece is set to announce new restrictive measures to prevent the spread of the coronavirus after an explosion of 865 new cases were reported on Thursday, with 331 cases in the region of Attica and 181 in Thessaloniki. Read more.

Don’t call it ‘lockdown’. The Czech government has announced strict new measures that come into effect on Thursday until at least 3 November, in response to an enormous rise in COVID-19 infections and hospitalisations across the country. However, Health Minister Roman Prymula denied that these measures amounted to a full lockdown. Read more.

From intern to consul in two years. Lenke Szászfalvi-Farkas became the consul of the newly opened Hungarian consulate in Geneva, despite few apparent professional qualifications, Telex reported. Szászfalvi-Farkas was a month-long trainee with MEP Andor Deli of the ruling Fidesz  party in 2018.

Hungary’s foreign ministry said Szászfalvi-Farkas “graduated from the Corvinus University of Budapest with a degree in Communication and Media Studies and has a high level of English and French language skills required for her work.” (Vlagyiszlav Makszimov | EURACTIV.com)

Slovak anti-abortion bill fails to gain ground. The draft law effectively limiting the access to abortion narrowly failed to gain enough support in Slovakia’s parliament on Tuesday. 58 MPs voted in favour of the law, one vote short of the necessary majority. Read more.

Several so-called “anti-choice” MPs were not present at the vote, and the bill will be tabled again in six months’ time, announced Anna Záborská, who introduced the bill which she says “helps pregnant women”. (Zuzana Gabrižová | EURACTIV.sk)

Croatian hospitals may be left without medication. The largest wholesales drug companies have suspended or are suspending drug deliveries to 75% of Croatia’s hospitals  because the government owes them a total of 5 billion kunas (around €700 million). Read more.

In other news, Croatian citizens consider that putting Croatia on a similar footing as other EU member states and easier payments, are among the biggest advantages of introducing the euro, according to the results of a survey conducted by the MojPosao portal. The biggest fears associated with the euro according to those surveyed, however, were the increases in price and loss of “monetary sovereignty”. (Željko Trkanjec | EURACTIV.hr)

Bulgaria blocks North Macedonia Frontex agreement. Bulgaria is the only country blocking the signing of an important border management agreement between North Macedonia and the European border agency Frontex, the obstacle being the way the neighbouring country designates its language, writes Dnevnik, partner of EURACTIV Bulgaria, quoting a Commission spokesperson. Read more.

Romania hesitates to introduce COVID-19 lockdown. The number of coronavirus infections rose abruptly on Wednesday, as the country is preparing for new restrictions. However, president Klaus Iohannis said another lockdown is not a solution. Read more.

Kosovo deceives Serbia and the EU, foreign minister tells UN. Serbian Foreign Minister Ivica Dačić during a virtual-session of the UN Security Council on Wednesday accused Priština of not having implemented the Brussels Agreement from seven years ago due to its refusal to form the Community of Serb Municipalities. At the same time, global powers spoke out against the continuation of the UN Mission to Kosovo. Read more.

Local election in Bosnia on 15 November. Around 3,280,000 are eligible to vote in the local elections due on 15 November, Bosnia and Herzegovina’s electoral commission has confirmed. For the first time in 12 years, elections will be held in Mostar – but on 20 December –  after the Croatian and Bosniak sides signed an agreement for implementing proposals from the Bosnia and Herzegovina’s judiciary and the European Court of Human Rights. (Željko Trkanjec | EURACTIV.hr)