Commission: Certain rights can be restricted due to COVID-19 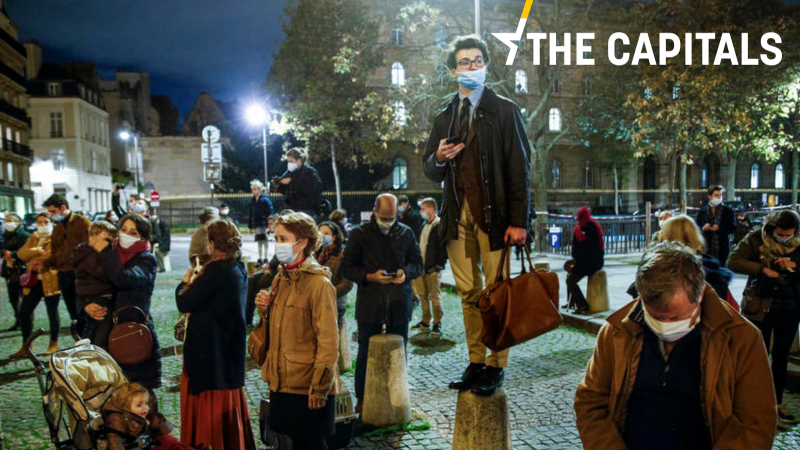 EURACTIV contacted the Commission following a four-day ban on all outdoor gatherings of more than four persons, imposed throughout Greece by an executive decree of the Greek police chief. [EPA/YOAN VALAT]

Before you start reading today’s edition of the Capitals, feel free to have a look at the article “COVID-19: Europe’s youth call on politicians to stop looking for scapegoats“.

Peaceful demonstrations are a fundamental right, but certain rights can still be restricted during a public health emergency, a European Commission spokesperson told EURACTIV, commenting on the ongoing debate about the treatment of public gatherings in member states.

EU lawmakers warned late last month against undue restrictions to the freedom of assembly in some member states and complained that some national emergency measures pose a “risk of abuse of power”.

EURACTIV contacted the Commission following a four-day ban on all outdoor gatherings of more than four persons imposed throughout Greece by an executive decree of the Greek police chief. See here what else the Commission has said.

Vaccine will be free but not compulsory. When available, the COVID-19 vaccines will be administered on a voluntary basis and free of charge for anyone living or staying in Belgium, the country’s various ministers in charge of health agreed. Read more.

German chancellor announces new meeting to tighten measures next week. Following a meeting with Germany’s 16 state leaders, Chancellor Angela Merkel announced a further meeting to be held on 25 November to discuss a further tightening of coronavirus restrictions, as well as a longer-term plan to combat the virus that will apply into 2021. Read more.

French government pre-orders 90 million vaccines. The government has reportedly pre-ordered 90 million doses of COVID-19 vaccines from several suppliers for the first half of 2021 and reserved €1.5 billion within the framework of the 2021 Social Security Budget for that purpose, according to information revealed Monday by business daily Les Echos. Read more.

Austria to start mass COVID-19 testing on voluntary basis in December. Austrian citizens, who entered their second lockdown, will have the opportunity – like in Slovakia – to partake in a large-scale COVID-test-operation in December before Christmas, Chancellor Sebastian Kurz (ÖVP) announced in an interview on Monday. He noted, however, that those who refuse testing will not be punished as was the case in Slovakia. More details will follow by the end of the week. Austria re-entered a ‘strict lockdown’ on Tuesday, shutting schools and non-essential shops. (Philipp Grüll | EURACTIV.de)

Johnson’s Scottish ‘disaster’. UK Prime Minister Boris Johnson’s hopes of being able to focus on EU-UK trade talks ahead of Thursday’s crunch EU summit were dealt a blow as Johnson provoked a new row with the Scottish government after describing devolution in Scotland as “a disaster” during a Zoom call with a group of Conservative party MPs. Johnson also labelled devolved government, introduced in 1998 by Tony Blair’s Labour government, as Blair’s “worst mistake”. Read more.

The offering was announced by  European Commission President Ursula von der Leyen on Monday. “Keeping people in work in the pandemic is our priority,” she tweeted, adding that Ireland will be the 18th country to benefit from the EU’s Support to mitigate Unemployment Risks in an Emergency (SURE) scheme. The fund has been set up by the Commission as an emergency response to support economies across the EU that had suffered as a result of the coronavirus crisis. (Samuel Stolton | EURACTIV.com)

About one in two Finns would take a COVID-19 vaccine when available. About 49% of Finns say they would be ready to take the COVID-19 vaccine if and when it becomes available, according to a survey conducted among people aged 15 to 74 in late September/October. Read more.

Italian ministers approve new budget law. Italy’s Council of Ministers approved the new draft budget law, which will be passed on to parliament for approval on Tuesday or Wednesday at the latest.

While the latest draft gives the green light to hiring 189 doctors for “assistance in healthcare and social security”, it does not change the revaluation of pensions. Italy’s southern regions will benefit from EU Cohesion funds to strengthen local administrations and create up to 2,800 new jobs.

Trade unions, however, are not impressed with the treatment of hirings and contracts for the public administration in the new budget draft and are threatening a strike. “We do not see progress for the public sector, despite what the government has said in previous weeks”, a joint statement reads. (Alessandro Follis | EURACTIV.it)

IGB pipeline speeds up despite pandemic. The construction of the Gas Interconnector Greece-Bulgaria (IGB) pipeline has progressed significantly despite restrictions due to the pandemic, said Greek construction group AVAX, which won the tender to build the gas pipeline.

AVAX announced that besides the pandemic and the extra safety measures, the works proceeded in high volumes in October, with almost 10% of the pipes having been installed in one month. More.

Rule of law battle rages on. Poland and Hungary vetoed the EU budget for 2021-2027 and the coronavirus recovery fund during Monday’s meeting of 27 EU ambassadors. Polish Prime Minister Mateusz Morawiecki argued that the rule of law mechanism which is featured in the package would introduce a “state of legal uncertainty”, pointing to the risk of political arbitrariness on the part of the European Commission. However, this means that the Polish National Reconstruction Plan under the EU Recovery Fund, which was supposed to be presented in early 2021, is now under threat. Read more: Hungary and Poland veto stimulus against pandemic (Joanna Jakubowska | EURACTIV.pl)

Czech Republic puts end to the ‘cage age’. Cage chicken farming will be banned in the Czech Republic as of 2027, after the Czech parliament’s upper chamber approved the new legislation on 13 November. Read more.

Hungary’s opposition to unite for 2022 elections. The leaders of the six major opposition parties — DK, Jobbik, LMP, Momentum, MSZP and Párbeszéd — announced a commitment to present one joint prime ministerial candidate, a joint party list and only one candidate in each constituency to run against the ruling Fidesz.

The “democratic opposition alliance” joint list will be presented after informal primaries to decide which candidates will run against the ruling coalition, where civil society figures will be allowed to run as well, and at the latest by 23 October 2021. (Vlagyiszlav Makszimov | EURACTIV.com)

Slovakia eases some restrictions as it gears toward third round of mass testing. Cinemas, theatres and churches in Slovakia are allowed to stay open as of Monday provided they keep the operation at 50% capacity, while schools will remain closed for older children at least until Christmas. Meanwhile, the country’s third round of mass testing is planned in districts where the infection rate exceeded 1% in the second round. (Zuzana Gabrižová | EURACTIV.sk)

EU recovery plan is big opportunity for Croatia, says Gentiloni. Croatia will be one of the biggest recipients of EU recovery aid, Economy Commissioner Paolo Gentiloni said during a video-conference on the EU Recovery Plan organised by the European Investment Bank (EIB), the European Commission Representation in Croatia and EURACTIV’s partner Hanza Media. Read more.

Parents can always choose online learning for children, says education minister. Parents who want their children to go online “have no reason to panic” as they could always choose this option, Serbia’s Education Minister Branko Ružić told the public broadcasting service (RTS) on Monday, adding that schools appear to be the safest place amid the COVID-19 pandemic and that the situation is constantly monitored. Read more.

Dodik likens himself to Churchill one day after the elections.  After the biggest Bosniak party SDA won 30 municipalities but lost 11 following Sunday’s local elections in Bosnia and Herzegovina, Serb leader Milorad Dodik conceded defeat in Banja Luka, by comparing the situation to Winston Churchill’s election loss in 1945. Read more.

Italy’s Guardia di Finanza to Audit Kosovo’s state treasury. Kosovo Finance Minister Hykmete Bajrami has requested assistance from the Italian authorities to support the investigation of the theft of €2 million from the State Treasury, exit.al reported. “I also asked the EU ambassador, Mr Thomas Szunyog, for financial support from the EU for the Guardia di Finanza to audit the Treasury”, Bajrami wrote on Facebook. (Željko Trkanjec | EURACTIV.hr)