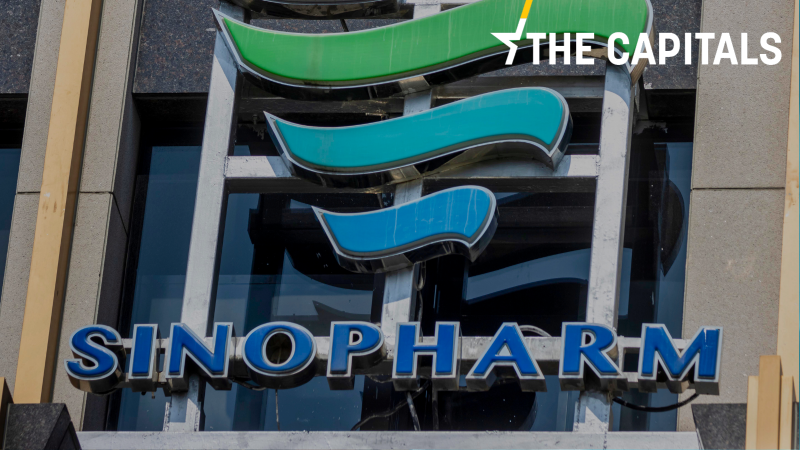 A Sinopharm company logo is displayed at the company's headquarters in Shanghai, China, 25 August 2020. [EPA-EFE/ALEX PLAVEVSKI]

Before you start reading today’s edition of the Capitals, feel free to have a look at the article Vaccination certificate ‘is a medical requirement’, says Von der Leyen.

Trip to Lisbon ‘essential’, says von der Leyen. European Commission President Ursula von der Leyen said she believes that a delegation from the EU executive to Lisbon is “essential and necessary” for the start of the Portuguese EU presidency while ensuring “every precaution” due to COVID-19. Read more.

EU rules do not prohibit the Hungarian government from ordering the Chinese Sinopharm coronavirus vaccine, the European Commission representation in Hungary said in a press statement.

This can be seen as the country’s latest move to break away from Brussels as it tries to speed up inoculations in order to lift curbs on the economy. Read more.

CDU party conference to choose a new leader begins. Germany’s ruling conservative Christian Democrats (CDU) will choose their new party leader on Saturday. Whoever of the three candidates wins has the best chance of becoming Germany’s next chancellor – and thus one of the most powerful politicians in Europe. Read more.

Austrian health minister plans to vaccinate 600,000 by April. “About 600,000 people” will be vaccinated in the first quarter of this year, announced Austrian Health Minister Rudolf Anschober (Greens), adding that 180,000 doses of the Pfizer vaccine and 10,000 of Moderna’s had already been delivered to Austria.

While both producers are set to deliver 1.2 million by the end of the quarter, “a high number” of the still unapproved AstraZeneca vaccine have been confirmed, the minister added. The second quarter will see “massive increases” in deliveries, Anschober hopes. (Philipp Grüll | EURACTIV.de)

Finland’s far-right nationalists go black and blue. Former members of the populist and nationalist Finns Party have registered an association that goes by the name of “Sinimusta” (Blue-Black), a direct and intentional reference to the far-right movement of the 1930s. The group is now starting to collect signatures to register a political party. Read more.

Estonia expects the unexpected. Russia’s unpredictable behaviour in the Baltic region and in international politics is likely to increase in the coming decades, Estonian President Kersti Kaljulaid told Finnish TV-channel MTV3 in an interview on Tuesday. Read more.

UK fishing industry faces £1m daily losses after Brexit. The Scottish fishing industry is counting the “crippling” costs of new bureaucratic requirements to export their catch to the EU, prompting industry leaders to warn that without immediate government support there could be “permanent casualties”. Read the full story here.

Ireland could lose 2 billion euros a year under global tax deal. Dublin’s annual corporate tax revenues could fall by up to €2 billion per year if “very big changes” are agreed to the global tax architecture, but such a hit is not imminent, Finance Minister Paschal Donohoe said on Thursday. Read more.

Spanish government to submit reform plan to access EU funding. The Spanish government is currently drafting a detailed “road map” of reforms – including changes to pensions and the country’s labour law – in order to speed up access to EU funding and mitigate the economic impact of the coronavirus pandemic. Read the full story.

Portugal on track to become coal-free by year-end. The Sines coal plant in Portugal went offline on Thursday, leaving Portugal with just one remaining coal power station in operation, which is scheduled for closure in November. Read the full story.

Poland to start vaccination registration. Registration will open at midnight on Friday for all adult Polish citizens who want to get the COVID-19 jab. Read more.

Bulgaria’s parliamentary elections to be held in April. Parliamentary elections in Bulgaria will take place on 4 April, announced President Rumen Radev, adding that every Bulgarian’s health and right to vote must be guaranteed and that citizens should be convinced that their votes will be counted correctly. Read more.

Nuclear energy ‘indispensable’ for Slovenia’s self-sufficiency. “In Slovenia, nuclear technology is indispensable for a modern, strategically-oriented energy self-sufficiency of the country and for strengthening its economic and social development,” said Danijel Levičar, chief operating officer of the GEN Energija consortium, which operates the Slovenian half of the Krško nuclear power plant (jointly owned with Croatia) on behalf of the government. Read more.

Romania plans to reopen schools in February. Most schools will reopen at the start of the second semester, on 8 February, if the number of COVID cases stays under control, Romanian president Klaus Iohannis said Thursday. However, there will be differences based on each locality’s epidemiological situation. If the number of cases surges, schools will again return to the online-only model. All schools in Romania closed at the beginning of November, after only a few weeks of holding in-person classes.

President Iohannis said a final decision will be taken on 2 February, when authorities will reevaluate the epidemiological situation. Universities will decide individually if they continue with online classes or reopen their doors as well. (Bodgan Neagu, EURACTIV.ro)

Serbian coalition not set on abandoning Kosovo. The “betrayal” of Kosovo “is the furthest thing from the mind” of the ruling coalition in Serbia, parliament speaker Ivica Dačić said on Thursday, adding that the option of recognising the territory’s independence in a dialogue with Priština was not a realistic solution. Read more.

The wish to emigrate is highest among medical students (91.5%), nursing students (83%), engineering students (79.2%), and architecture students, since finding jobs in these fields outside Albania remains easier. While 13% of Albania’s entire medical staff emigrated from 2013 to 2018, according to Monitor, the amount of fresh medical graduates is now equal or even lower than that of the doctors who have left the country. (Željko Trkanjec | EURACTIV.hr)

Kurti and Osmani, a winning option for the elections. The Civic Initiative party led by acting president Vjosa Osmani and Kosovo’s biggest opposition party Vetevendosje (Self-determination) signed on Thursday an agreement on cooperation for the upcoming 14 February election.

Osmani was a member of the Democratic League of Kosovo (LDK) but left the party in September after she was removed from the position of the LDK vice president. Osmani criticised her former party’s decision to break up the Vetevendosje-LDK coalition which led to toppling Kurti’s Government in June 2020. Vetevendosje’s president, Albin Kurti, will be a candidate for prime minister and Osmani for president (who is elected in the assembly). (Željko Trkanjec | EURACTIV.hr)