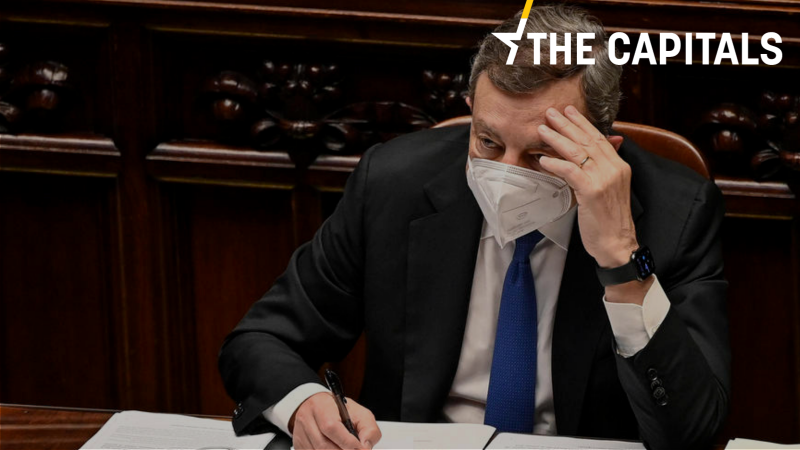 Although initiatives have been introduced to combat corruption and collaboration between institutions is working well, efforts have been "hampered by the excessive timeframe of criminal trials". [EPA-EFE/Riccardo Antimiani]

Before you start reading today’s edition of the Capitals, feel free to have a look at the article EU, US reject Erdogan’s plans for a two-state solution in Cyprus.

Freedom of the press, lack of independence of the judiciary and the management of migrants: The European Commission in its second EU-wide rule of law report released on Tuesday stated that during the COVID-19 pandemic, “the risk of corruption in Italy increased significantly”. Read more.

Social partners and regions get greater say in conference on EU future. The executive board of the Conference on the Future of Europe decided at Monday’s session to allocate more seats in the Conference Plenary to both regional and local representatives, and social partners, the Slovenian EU presidency said. Read more.

EU Commission report slams Austria for attacks on judiciary. A series of worrying trends, including the verbal attacks on the judiciary’s independence, integrity risks of MPs and the high amount of state advertisements, are to be seen in Austria, the European Commission wrote in its second country-specific report on the rule of law in the country. Read more.

France mulling new COVID-19 restrictions. As France faces an “explosion” of COVID-19 cases due to the Delta variant, according to government spokesman Gabriel Attal, the executive seems to be considering new restrictions. Read more.

Johnson: EU must show ‘pragmatism’ in dealing with NI protocol issues. Irish Prime Minister Micheál Martin and prime minister Boris Johnson have spoken ahead of Wednesday’s announcement of Britain’s proposals to change how the Northern Ireland protocol is implemented. Downing Street said Johnson told the Taoiseach that the EU must show “pragmatism” in dealing with problems related to the protocol, the Irish Times reported.

“The prime minister emphasised that the way the protocol is currently operating is causing significant disruption for the people in Northern Ireland. He made clear the UK government’s commitment to protecting the Belfast (Good Friday) Agreement in all its dimensions. He said the EU must show pragmatism and solutions needed to be found to address the serious challenges that have arisen with the protocol,” a spokesperson said. (Paula Kenny | EURACTIV.com)

Cyprus urges world to talk tougher to Turkey’s Erdogan. If the world does not react to Turkish President Recep Tayyip Erdoğan’s new provocative actions, he will be encouraged to continue, not only in Cyprus but also in the region where Turkey’s destabilising role extends, in a manner that also undermines US interests, Cyprus Foreign Minister, Nikos Christodoulides said on Tuesday. Read more.

Spain fully vaccinates half the population. Just over half of Spain’s population, or 24.4 million people, are now fully vaccinated against COVID-19, according to the health ministry. Read the full story.

In other news, the Spanish government has put forward a bill that will prohibit the glorification of the 1936 military uprising that overthrew the Second Spanish Republic and kick-started the Civil War and Francisco Franco’s decades-long dictatorship. (EFE)

Portuguese PM predicts herd immunity by summer’s end. Portugal should reach group immunity by the end of the summer, Prime Minister António Costa said on Tuesday, adding that this creates “a very important moment for confidence and total liberation of society.” Read more.

Experts: Media ownership in Czechia concentrated, not transparent. Ownership of Czech media is very concentrated and not always transparent, according to the Media Pluralism Monitor published by the European University Institute. Read more.

EU Commission gives Poland deadline to comply with CJEU decisions. The EU executive has given Poland a 16 August deadline for it to comply with the order issued by the EU Court of Justice (CJEU) last week, which called on the country to freeze all actions by the disciplinary chamber against judges and labelled the country’s disciplinary system for judges as being contrary to the EU’s Treaties. Read more.

Papal masses in Slovakia only for vaccinated. Only those fully vaccinated against COVID-19 will be able to attend the meeting with Pope Francis, who will visit Slovakia in September, announced Health Minister Vladimír Lengvarský, after an agreement with the President of the Conference of Bishops of Slovakia Stanislav Zvolenský was reached. Read more.

Bulgaria convicted of inhumane treatment of extradited Turkish journalist. The European Court of Human Rights (ECtHR) has convicted Bulgaria for inhumane and degrading treatment of a journalist extradited back to Turkey, despite the risks of being abused during the persecution of Gulenists in the country. Read more.

EU Commission acknowledges Romania’s progress on judicial reform. Romania is working to revise the changes brought a few years ago to the judicial system that raised a lot of concerns, the EU executive said, pointing, however, to a stalling of discussions.

Romania’s government ”is proposing reforms aimed at addressing the concerns raised by the amendments of the justice laws of 2017-2019, which drew criticism for their negative impact on independence, quality and efficiency of justice,” according to the Commission’s yearly rule of law report.

In Bucharest, however, things do not look quite as rosy. The coalition is stuck on how to dismantle the Section for the Investigation of Offences in the Judiciary, whose creation a few years ago was heavily criticised. While the government proposed a bill to abolish this section in February, adoption has been delayed in parliament, with coalition partners accusing each other of not actually wanting to go on with the process. (Bogdan Neagu | EURACTIV.ro)

Twelve Split politicians arrested on suspicion of corruption.  Split  Mayor Ivica Puljak has confirmed that police and the USKOK anti-corruption office are investigating the city’s administration and that he would do everything in his power for any possible cases of corruption to be resolved.

The arrested were involved in the construction business, including a former head of the physical planning and construction department in the city administration. Some of those arrested are members or close to HGS, a party organised and led by stumbling tycoon Željko Kerum. The new Split administration, like the Zagreb one, entered its position confirming zero tolerance to corruption. Corrupted institutions on the local and county level in Croatia were often mentioned by foreign investors as the biggest obstacle for expanding business and investments. (Željko Trkanjec | EURACTIV.hr)

Russia asks UN Security Council to abolish post of High Representative in BiH.  Russia requested a vote in the UN Security Council on its recent draft resolution, which if adopted would result in closing down the institution of Bosnia’s international administrator by the end of July next year, to take place on Thursday, AFP reported.

It is now up to France to decide on the request, as the country holds the presidency of the Security Council this month. The draft resolution, also backed by China, would also immediately strip the high representative of the international community, tasked with overseeing the civilian implementation of the 1995 Dayton Peace Agreement, of his special powers. (Željko Trkanjec | EURACTIV.hr)

North Macedonia approves bill on narcotic drugs, psychotropic substances. North Macedonia’s government has approved the text of the bill on Control of Narcotic Drugs and Psychotropic Substances, which is harmonised with several international acts. Read more.

According to the statement, speaking about the business environment in Montenegro, Rising Reinke referred to the benefits that NATO membership has brought to the country. “It’s no secret that investors are looking for stability and predictability. In the long run, each new investment implies new jobs, infrastructure development, additional income and a better standard of living for the citizens of Montenegro.” (Željko Trkanjec | EURACTIV.hr)

Turkey seeks US support to boost Kosovo’s international status. Turkish President Recep Tayyip Erdoğan has said he is doing his best to increase the number of countries worldwide that recognise Kosovo.

“We want to increase the number, which currently stands at 114,” he said, according to  exit.al .

“At this point, we will discuss these issues again in meetings with Biden at the UN General Assembly this year. We would like to carry out joint work on the recognition of Kosovo and will propose it to him,” stated Turkish President Recep Tayyip Erdoğan,.

Under President Aleksandar Vučić, Serbia embarked on a diplomatic campaign to push countries to withdraw their recognition of Kosovo but it remains unclear how successful it was. In 2020, it pledged to end this campaign in a document signed at the White House. In return, Kosovo pledged to pause its attempts to seek membership in international organisations for one year.  (Željko Trkanjec | EURACTIV.hr)