“The Commissioner has never discussed the MFF with the new government,” a source from Oettinger cabinet told EURACTIV.com. “The idea was to exchange views directly with the vice prime minister.”

Oettinger already visited all the EU27 countries, mostly before tabling the proposal, and had discussions with the former Italian government as well.

Thursday’s meeting was only about the priorities, the amounts, new principles that the Commission proposed on 2 May, now under discussion between the Council and Parliament, the official said.

However, after the meeting, Di Maio told the press that they had discussed immigration as well.

“I appreciated when the Commissioner said that Dublin asylum system came from a different time, that it’s obsolete and needs to be overcome. Now it requires us to move from words into action,” the deputy prime minister said.

The Commissioner also met the president of the chamber of deputies, Roberto Fico, another key figure of the Five Star Movement, and two independent members of the government, Foreign Affairs Minister Enzo Moavero Milanesi and Paolo Savona, in charge of EU affairs.

While Savona may be considered close to Lega, he is not affiliated with the party, which shares power with the Five Star Movement in Italy. No member of Salvini’s party was consulted by the Commissioner.

Later on, Oettinger participated in a joint hearing with the European Affairs and Budget Committees of the Chamber of Deputies and the Italian Senate.

In meeting today w/ Italian Vice Prime Minister @luigidimaio, we agreed to continue our dialogue on
the long-term #EUBudget + will then adress the various aspects in more depth #Italy #Rome pic.twitter.com/P3aZJiQZH3

Di Maio and Oettinger fell out in August, when Di Maio threatened to pull billions of euros of EU funding over migration, accusing Europe of turning its back as his country was grappling with seemingly endless arrivals of migrants in the Mediterranean.

Oettinger criticised the threat saying that to block the negotiations would not be smart because it’s damaging all member states, citizens, farmers, researchers, and the EU’s competitiveness.

“Our position on planning the European budget has not changed for the moment,” said Di Maio after the meeting with Oettinger, confirming that Italy is still set to veto the EU budget talks as a result of the tug of war with the Commission over migrants.

“We are very concerned for now about the discussion on the next budget,” he added. 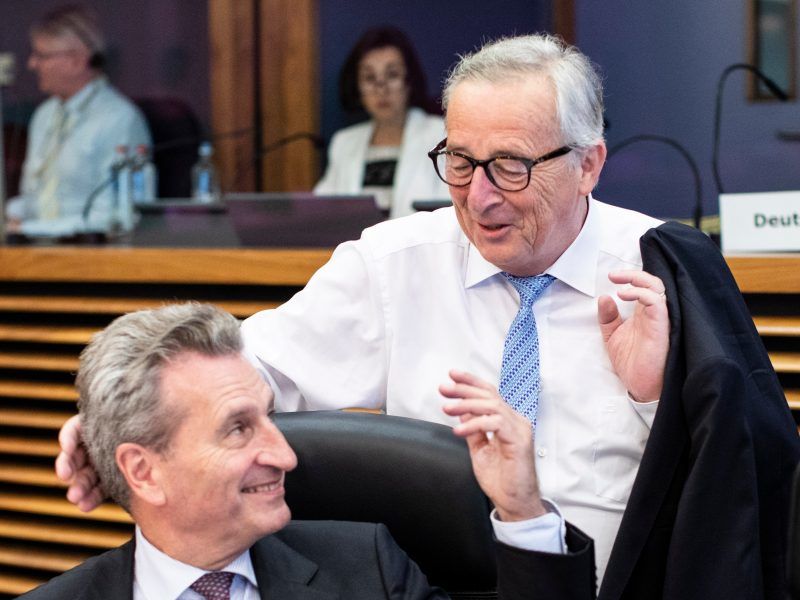 It is in no one’s interest to hold up budget negotiations at the European Union, the bloc’s budget chief warned Tuesday (28 August) after Italy threatened a blockade over the migrant issue.

Commissioner Oettinger has become a preferred target in Italy after he triggered a wave of outrage all over Italy when he suggested in an interview that markets will “teach” Italian people how to vote. He later said his meaning was misconstrued, but the bad blood remained.

On Wednesday, Commission chief Juncker went after Salvini in an interview with the international press.

“Salvini said that in the electoral campaign, every time I open my mouth he wins votes. I don’t want to be useful to him but useful to Italy,” said Juncker.

Asked about the possibility of a dialogue between the European People’s Party and Lega, Junker told the press that he does not see a single reason why the EPP should develop a partnership with Salvini.

While he was “stunned by the continual attacks of the deputy premier and interior minister Matteo Salvini on Brussels,” the Commission president said he was on good terms “with premier Conte, my friend Giuseppe.”

Juncker told reporters that he had a phone call with Conte on Tuesday evening. “We talked about what I was going to say [in the State of the Union] today. In Italy, a part of the government was concerned that I was going to attack the Italian executive,” Juncker said.

“They thought I would attack them in the same way they do the EU and the Commission,” he concluded.