A special CDU party conference was originally scheduled for this week, but the election of the new chair of the biggest German conservative party has been postponed indefinitely. According to current polls, Armin Laschet, whose candidacy is supported by Health Minister Jens Spahn, may be able profit from the current crisis. EURACTIV Germany reports.

The coronavirus crisis is changing the debate about who should succeed Annegret Kramp-Karrenbauer as the CDU chair, although she emphasised last week that the issue is currently of little importance internally.

Armin Laschet, Friedrich Merz and Norbert Röttgen, three North Rhine-Westphalian political heavyweights, have applied for the presidency of the Christian Democratic Union. However, it is becoming apparent that the crisis could play into Laschet’s hands.

Laschet/Spahn duo on the rise

“Spahn and Laschet have made good use of the last few weeks,” Stefan Marschall, a professor of political science at Heinrich Heine University in Düsseldorf, told EURACTIV Germany.

This is also reflected in current opinion polls. The CDU’s popularity has risen sharply in recent weeks and not only on the federal level.

In North-Rhine Westphalia, too, the CDU has reached the highest approval rating since 2009, according to the latest state survey conducted by the opinion research institute infratest dimap. State premier Laschet is more popular than ever before.

Both Spahn and Laschet have gained a lot of prominence in recent weeks through their respective political posts, said the Düsseldorf professor. “This is especially important for Laschet because although he is very prominent in the NRW, he first had to establish a profile beyond the state.”

It is currently very clear that those who are in charge are very popular. “If the election were to take place in the next few weeks, it would clearly go in favour of Laschet and Spahn,” Marschall believes. 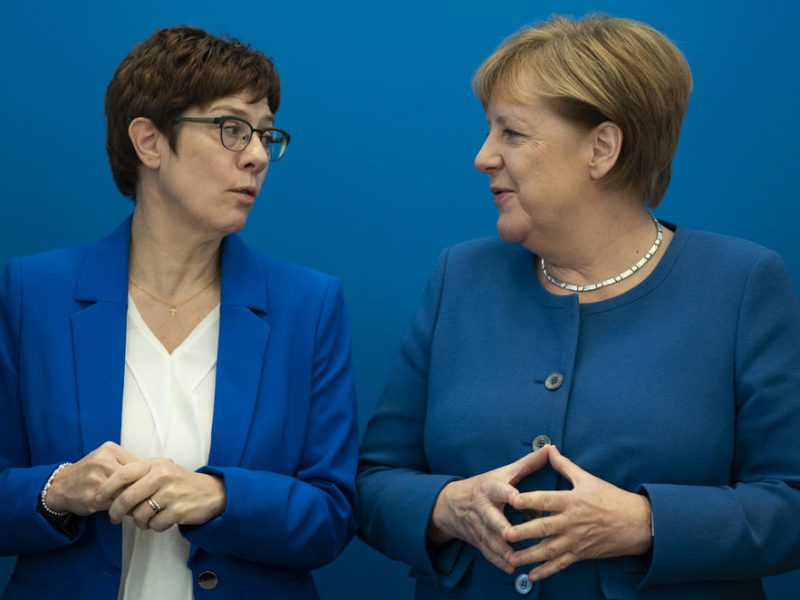 Will the coronavirus cause the comeback of Germany's political centre?

The increasing popularity of the applicant duo is likely to be to Merz’ disadvantage in particular. While Merz polled at around 40% in mid-February, he has hardly appeared in public in recent weeks, not least because of his own bout of coronavirus infection.

The Laschet/Spahn duo also enjoys great support from the powerful North Rhine-Westphalian CDU state association, which has the strongest CDU state association in Germany in terms of membership numbers. On 27 February, the state CDU issued a statement officially supporting the pair.

Implications of the postponement

Marschall emphasised, however, that “in assessing the current situation and popularity of the candidates, it must never be forgotten that Germany is currently in an exceptional situation.”

It is quite possible that political winds in the election campaign could change from autumn onwards. “When the crisis is over, we will have to see whether there have been mistakes and, in retrospect, failures,” he said.

Given the temporary bump in support for Laschet and Spahn during the coronavirus crisis, Merz, in particular, could benefit from the postponement of the party conference.

While much will depend on how the current situation develops, the election of the CDU chair, however, is primarily about the question of which direction the party wants to take in the long term.

Given the temporary bump in support for Laschet and Spahn during the coronavirus crisis, Merz, in particular, could benefit from the postponement of the party conference.

Increasing popularity for Laschet/Spahn, but Söder also a contender

Marschall describes Laschet’s coup to bring Spahn into the team as a “brilliant move.” At the end of February, it was probably not clear to either of the what popularity the duo would enjoy in the weeks following the announcement of their candidacy, due to the outbreak of the coronavirus.

According to a recent survey, Spahn and Laschet, who as party chairmen would traditionally have the first right of access to the candidacy for chancellor, are almost evenly matched when it comes to the question of who the Germans would like to see succeed Angela Merkel.

Could Spahn’s growing popularity be Laschet’s downfall? Rather unlikely, said Marschall, “Spahn will continue to remain in the second row when it comes to the question of who will chair the CDU. Anything else would be perceived as lacking solidarity.”

However, in the long term, Spahn could position himself as Laschet’s successor.

Whether Laschet will actually become the CDU/CSU’s chancellor candidate in the end is still questionable.

His strongest rival remains Markus Söder, Bavarian premier and leader of the CDU’s sister party, the CSU. According to a recent survey conducted by the opinion research institute YouGov on behalf of the German press agency DPA, Germans would prefer to see Söder as Merkel’s successor.

In Laschet’s state of North Rhine-Westphalia, 43% of those surveyed also consider Söder a good candidate for chancellor. This places him just behind Laschet, who received 45% in the same poll.

Söder himself continuously stresses that his place is in Bavaria, but if his popularity ratings remain at a high level, he will remain in the game as a possible candidate for chancellor.