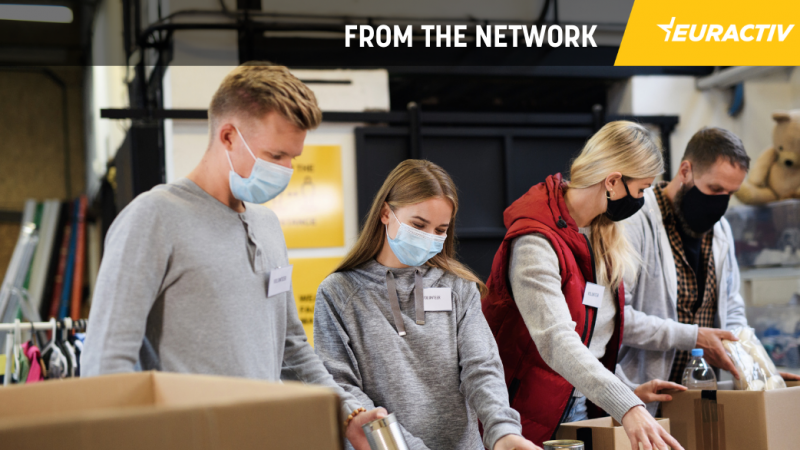 Europe’s youth have called on EU leaders to stop putting the blame on them for the second wave of the pandemic. Instead, politicians need to see the reality of many young people being jobless, still staying with their parents and simultaneously being in the frontline in the fight against the virus.

“The easiest is to scapegoat someone. Now is not the time to blame anyone for the crisis as everyone is affected in different regards,” Carina Autengruber, president of the European Youth Forum (EYF), told EURACTIV.

“Especially politicians, they need to transmit a message of compassion. They, therefore, need to stand with the citizens and support them,” she added.

As rates of COVID-19 transmissions were going up in many parts of Europe in recent weeks, officials have identified social interactions between young people as a source of the resurgence, turning the discussion into a generational conflict.

Images of so-called “corona parties” broken up by police and young people not adhering to social-distancing rule have been widespread since the start of the pandemic, increasingly creating an image of a young generation that is seemingly careless about vulnerable age groups in society.

Some EU politicians and media have one way or another tried to put the blame on the young.

“Our plans were betrayed by the behaviour of some irresponsible people […] the main focus of the spread of the virus was young people who were partying”, Mitsotakis told the Greek parliament.

But the wider picture is a bit more complex, according to the EYF.

“Many young people still live with their parents, sometimes they don’t even have enough space. One out of six people during the pandemic stopped working,” Autengruber said, adding that a fragile reality after the pandemic adds more headaches for young people.

“We are calling on EU leaders not to repeat the mistakes of the financial crisis but invest in a sustainable future for young people as well as in quality jobs,” the young activist added.

Autengruber also emphasised the high number of young people working in the health sector, meaning in the frontline of the fight against COVID-19, as well as in the retail sector such as supermarkets, where they are exposed to the virus on a daily basis.

“We are helping the society in going through this crisis,” she said, adding that young people also participate in many volunteering activities.

Surveys are not in favour of politicians’ arguments either. According to a recent YouGov poll, 83% of young people adhere entirely or predominantly to the measures and recommendations for dealing with the pandemic, with only 2% not adhering to them.

At the political level, the response is somewhat more nuanced in most member states, with no direct blame being attached.

Germany has taken a different approach, releasing a series of ads hailing couch potatoes as the unsung heroes of the COVID-19 pandemic. The videos have been widely shared on social media, with many praising the German government’s sense of humour as well as its message of social distancing, instead of singling out isolated events of young people overstepping the rules.

In France, the government has acknowledged that young people are getting through difficulties and floated the idea about reconfining only the elderly. But government spokesman Gabriel Attal rejected such a possibility, stressing that it would be “ethically” problematic.

Spanish politicians have avoided a blame-game, but the health ministry has many times warned young people to be careful as they can be an infectious agent and put elderly at risk.

However, it is commonplace these days to listen to conversations of private citizens in the supermarket, bars – and particularly elderly – speaking of the “irresponsible youth” not adhering to the rules. This narrative is fed by Spanish police dismantling a series of illegal parties.

In Italy, the government has never publicly blamed young people for the resurgence of COVID-19 cases. But considering that the restrictions hit primarily their usual activities, it added to the general feeling, diffused among adults and fuelled by media reporting, that younger people are irresponsible and only want to party.

In Eastern Europe, there has been more emphasis on joint efforts.

In the Czech Republic, young people were not blamed for the COVID-19 outbreak. But former health minister Roman Prymula, who had to resign after he breached his own measures, said that “the young generation does not recognise measures against COVID-19 as important”.

In neighbouring Slovakia, the media debate is focused on the effects of lockdowns on children as they suffer from the lack of proper education and social contacts. However, this does not seem to be at the forefront of governments concerns.

In Serbia, all citizens have been called on to respect the measures for preventing the spread of the epidemic. But social media have flooded with photos and videos showing a large number of Belgrade clubs violating the rules by being open after 23:00. The visitors of the clubs are, of course, primarily younger people.

In Croatia, the government has sent mixed messages. Last spring it blamed weddings, while in summer, the seaside night clubs. In autumn, the entire nation was urged to abide by the safety measures, but young people were not targeted. Some of them used to gather at some point around Zagreb’s National Theatre but the police banned these meetings.