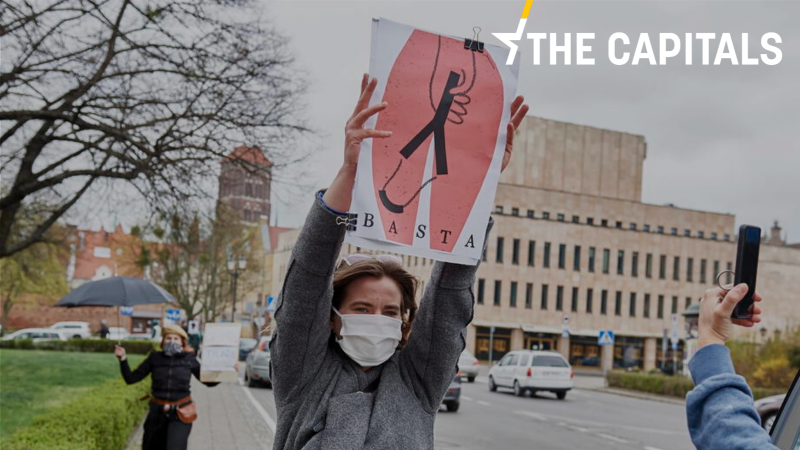 Slovakia is urging women to protect their health and not request any procedures from the doctors that can seriously affect their health. [EPA/ ADAM WARZAWA]

Before you start reading today’s edition of the Capitals, feel free to have a look at the article “Green Deal will be ‘our motor for the recovery’, von der Leyen says“, by Frédéric Simon.

COVID-19 apps could help abolish virus restrictions, ministers say. EU interior ministers have hailed the potential of contact tracing technologies to curb internal border checks and travel restrictions related to the current public health pandemic. But a lack of congruity between member states over the technical details of such apps could limit their effectiveness. Samuel Stolton has the details.

MEPs voice ‘strong reservations’ about Commission’s market intervention measures. In a letter to Agriculture Commissioner Janusz Wojciechowski, MEPs on the European Parliament’s Agriculture Committee criticised the package of measures proposed by the Commission to relieve distressed agri-food markets in the wake of the COVID-19 crisis. Gerardo Fortuna reports.

Many hospitals in Slovakia have stopped performing abortions following a government decision to postpone all planned surgeries except life-saving ones due to the risk of infections during the coronavirus pandemic.

>>To read more about how Slovakia has been dealing with the pandemic, check here.

Discussions for Lufthansa bailout may fail. Despite initial reports that Lufthansa will receive a €9 billion bailout from the German government, it turns out the aviation giant may refuse it given the strings attached and is instead considering insolvency protection proceedings, the Frankfurter Allgemeine Zeitung reported yesterday (28 April).

The main sticking point, which has been the subject of internal debate for weeks, is the government’s role on the company’s board following the bailout. Reports indicate that the government would be allowed two voting members on the board, while Lufthansa wants them to be a silent partner.

Meanwhile, state education ministers have come up with a plan to ensure all children in Germany attend school again before the summer holidays. However, due to social distancing rules, the ministers plan to combine in-person classes, digital learning, and homeschooling. Their proposal will be sent to Chancellor Angela Merkel (CDU) and state leaders to be discussed on Thursday (30 April).

Germans urged to stay home as coronavirus infection rate rises. According to Reuters, Germany’s coronavirus infection rate has edged up from earlier this month and people should stay at home as much as they can despite a lockdown relaxation last week, the head of the Robert Koch Institute for infectious diseases said on Tuesday. To stay abreast of the COVID-19 situation in Germany, click here.

Primary and nursery schools will start to gradually reopen from 11 May, while colleges (ages 11-14) will start opening their classrooms on 18 May and high schools (ages 15-18) will open their doors in June. Gatherings of up to ten people will be allowed and public transportation will reopen. However, measures will only be eased in territories with low exposure to the pandemic, while stricter rules can be maintained in exposed ones. (EURACTIV.FR)

Find out more about how France has been dealing with the current health crisis.

Defence ministry to acquire masks for distribution. The Belgian government has instructed the Department of Defence to launch a government contract through its purchasing department and search for 12 million cloth mouth masks, defence minister Philippe Goffin announced. Alexandra Brzozowski has the details.

Find out more about the situation in Belgium here.

BA to cut 12,000 jobs. British Airways is going to cut up to 12,000 jobs from its 42,000-strong workforce on the back of heavy losses from the coronavirus pandemic. The carrier, which has already put almost 23,000 staff on furlough, saw its revenues for the first quarter of 2020 fall by 13% to €4.6bn and is anticipating heavy losses over the rest of the year. EURACTIV’s Benjamin Fox takes a closer look.

And to find out more about the latest coronavirus updates in the UK, click here.

Government announces further lockdown easing. The limitations on public life will be lifted on 1 May, Health Minister Rudolf Anschober (Greens) told a press conference on Tuesday (28 April). While people will once again be allowed to leave their homes without having to state a reason when stopped by the police, they will have to keep a one-metre distance between each other. EURACTIV Germany’s Philipp Grüll has more.

For more on Austria, check this link here.

Calculated risk. On 4 May, only 4.5 million Italians will go back to work after the government’s decision to ease the lockdown. Italy’s Prime Minister, Giuseppe Conte, stressed that no other restrictive measures could be lifted, as allowing certain activities to reopen is already a “calculated risk”.

According to a technical document drafted by epidemiologists, a total reopening would lead to a rapid collapse of the healthcare system with an estimated 151,000 new patients admitted to ICU in June. This document has prompted the executive to adopt a more cautious approach in its second phase of lifting the lockdown announced on Sunday (26 April). (Gerardo Fortuna | EURACTIV.com)

The latest, comprehensive overview of Italy’s response so far.

Transition to a ‘new normality’. The transition to a “new normality” will last six to eight weeks, explains Pedro Sánchez, with continuing restrictions on travel to other provinces and Spanish islands. El País has the details.

///
ATHENS
Mitsotakis announces easing of lockdown measures as of 4 May. Measures restricting movement outside homes will be lifted as of May 4, Greek Prime Minister Kyriakos Mitsotakis said at a televised meeting on Tuesday. Athens–Macedonian News Agency has the story.

Former Estonian PM turns south. Speaking to the Estonian broadcasting company ERR interview on his 60th birthday Mart Laar, who is currently Bank of Estonia Chairman of the Supervisory Board and the country’s former Prime Minister, said the COVID-19 crisis has demonstrated that Finland does not want a special relationship with Estonia. EURACTIV’s Pekka Vänttinen reports.

Have a look at Finland’s response to the coronavirus pandemic.

Lithuania criminalises breaches of self-isolation. The Lithuanian parliament, Seimas, backed amendments on Tuesday (28 April), which criminalise the breaching of self-isolation rules, punishable by up to a year in prison. Previously, breaking the mandatory 14-day self-isolation – such as when coming back from abroad – carried only administrative liability.

Curious about the situation in Lithuania? Read on.

Virtual elections not completely free. The President of the State Election Commission (PKW), Sylwester Marciniak, has expressed concern that the presidential elections scheduled for 10 May by postal vote will not be fully free. He stressed that the elections must be conducted in such a way as to exclude the possibility of questioning the legitimacy of the winner. At the same time, the PKW had been sidelined from organising the elections.

If the polls go ahead as planned, the organisation will be in the hands of politicians, mainly Jacek Sasin, deputy prime minister. (Łukasz Gadzała | EURACTIV.pl)

Dispute with Russia over press freedom. “We did fight for a free press and the end of censorship 30 years ago. It is not acceptable to let other states meddle with it,” said Czech Foreign Minister Tomáš Petříček in response to a diplomatic note obtained from Russia.

Czech weekly Respekt has been accused by the Russian embassy in Prague of spreading fake news about a dangerous Russian agent that allegedly arrived in Prague.

According to Respekt, the agent was equipped with ricin poison and Czech security services perceived him as a security threat to Prague Mayor Zdeněk Hřib and the mayor of Prague’s sixth district, Ondřej Kolář. Both politicians have a dispute with Russia over removing the statue of soviet marshal Ivan Konev from the city’s sixth district.

Don’t hesitate to check the COVID-19 country update for the Czech Republic.

In other news, the Czech parliament voted on Tuesday (28 April) to extend the state of emergency until 17 May. Opposition parties, however, have said they did not agree with such a long extension and claim the government had not been able to explain why the state of emergency should be extended. (Aneta Zachová | EURACTIV.cz)

Wizz Air restarts flights. The Wizz Air budget airline plans to relaunch 16 routes from its Budapest base starting from 1 May, including destinations such as Athens, Barcelona, Madrid, Stockholm as well as Berlin, and plans to restart operations from its second base in Debrecen, from June, AIRportal.hu reports.

As the Hungarian airline is currently using 3% of its capacity (4-5 planes) and six flight routes, this will be a major increase. Wizz Air places the responsibility on travellers for checking travel restrictions in place to ensure that they are able to enter at their destination, reserving the right to refuse carriage if restrictions “may, or will apply” to the passenger in question. (Vlagyiszlav Makszimov | EURACTIV.com)

Stay in the loop with everything happening in Hungary.

Summer dreams. Bulgaria’s tourism ministry plans to kickstart the summer tourist season on 1 July. “I am an optimist. We have developed plans that we will present for discussion to the tourism sector,” Tourism Minister Nikolina Angelkova announced on Tuesday (28 April). Angelkova urged Bulgarians to help in these difficult times by choosing Bulgaria for their vacation, particularly as Bulgarians increasingly prefer to spend their vacations abroad, mainly in Greece and Turkey.

While authorities still have no concrete plans on how to open hotels, restaurants and summer resorts, Angelkova confirmed various scenarios had been presented to the health ministry.

More on Bulgaria’s COVID-19 response can be found here.

Life won’t return to normal after 15 May. President Klaus Iohannis talked with journalists about the ease of restrictions, noting that, while the state of emergency might be lifted on 15 May, life will not return to pre-COVID norms. “We may still meet three people at most, we won’t leave town without serious reasons, we won’t go to restaurants,” Iohannis told a news conference on Tuesday (28 April). EURACTIV Romania reports.

Check out Romania’s response to the COVID-19 pandemic, here.

“As for abolishing controls at the internal EU borders, we have agreed that we should be cautious, just like in considering the possibility of reopening the external EU borders,” Bozinovic, who chaired a video conference of EU ministers, said. Most of the ministers agreed that their decision on lifting these measures will be in accordance with the epidemiological situation, as well as with appropriate application of sanitary measures, social distancing, and other protective measures. This is the key to open the tourism discussed on Monday’s video conference, read more.

If you are interested in how Croatia is weathering the COVID-19 storm, check here.

Transport and Infrastructure Minister Oleg Butković described the agreement as a step toward Croatia’s aim of building its section of the Vc corridor, which is 702 kilometres long from Budapest to the southern Croatian seaport of Ploče. Read more.

Parliament approves second stimulus package. Slovenia’s parliament endorsed a second coronavirus stimulus package involving a €2 billion guarantee scheme for loans to companies. A number of MPs were unhappy, saying the conditions were too strict, particularly for smaller firms.  “This law certainly won’t help small businesses…because the conditions are so stringent that no one will take out a loan,” said MP Marko Bandelli (SAB).

More on Slovenia’s COVID-19 response can be found here.

In other news, PM Janez Janša confirmed the government will on Wednesday (29 April) discuss plans to relax coronavirus lockdown measures as the current data, in his words, makes it possible to assess that some restrictions on movement can be lifted and gradually revive many other activities. (Zoran Radosavljević | EURACTIV.com)