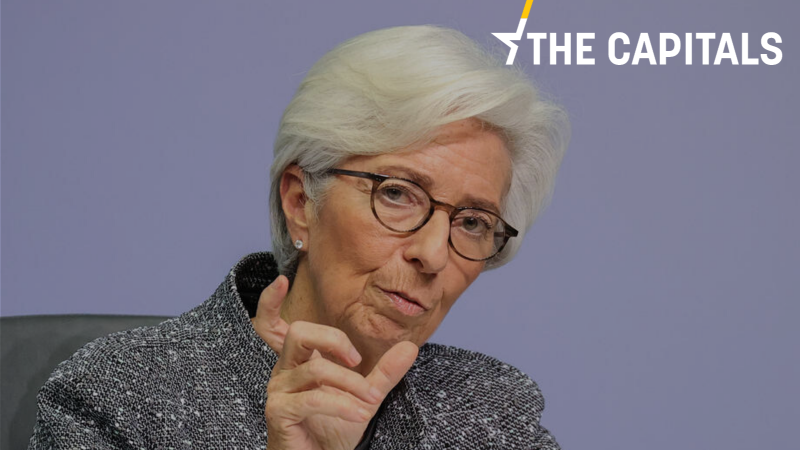 After Lagarde’s shattering comments, Milan stock fell 16.9%, the biggest single-session drop since the index was created in 1998. [EPA/ARMANDO BABANI]

Before you start reading today’s edition of the Capitals, feel free to have a look at the article “Social distancing the only cost-effective solution to coronavirus for now” written by Sarantis Michalopoulos. Also read the EU Commission’s new Pharmaceutical Strategy, which wants to touch core issues.

Lagarde said it is not the ECB’s role “to close spreads” in government debt markets, rejecting the legacy of her predecessor Mario Draghi who said during the 2012 debt crisis that the European bank would do “whatever it takes to preserve the euro”.

After Lagarde’s shattering comments, Milan’s stock exchange fell 16.9%, the biggest single-session drop since the index was created in 1998. Gerardo Fortuna reports on the harsh reaction of Italian officials.

Coronavirus closures. Ireland has issued a temporary closure on all schools, colleges and childcare facilities in the country. Speaking in Washington, Taoiseach  Leo Varadkar said that indoor events of more than 100 people would be cancelled and outdoor events with more than 500 should be shelved. Working from home is encouraged while socialising should be limited, official advice said. Samuel Stolton digs deeper.

Hunt, who stood against Johnson for the Conservative party leadership last summer, criticised the pace of the government’s response to what he termed a “national emergency”, adding that it was far behind the example set by Italy and other countries. Benjamin Fox reports from London.

Virus hits Spanish government. Spain’s Equality Minister, Irene Montero, was diagnosed with COVID-19. A heavyweight of the left-wing Podemos party, she is a junior member of the ruling coalition with the Socialists and the partner of its leader, Pablo Iglesias, who went into quarantine on Thursday. Jorge Valero has more.

Schools closed. All schools in Portugal will suspend all classroom activities from Monday (16 March), Prime Minister António Costa announced. This temporary measure, until the end of the school term, before the Easter holidays, will be reassessed on 9 April. Costa also announced the closure of all nightclubs, restrictions on bars, restaurants and shopping centres and a ban on cruise ships docking in the country. Football games are suspended. Portugal now has 79 confirmed cases of infection. (Lusa.pt)

First death. While 51 cases of coronavirus have now been confirmed in Poland (up from 31 since yesterday), the country recorded its first death linked to the virus. A 57-year-old from the city of Poznań in western Poland. Shops and galleries are still open, but the government had to deny that they will be closed soon. Many people rushed to stores to secure food reserves. (Łukasz Gadzała | EURACTIV.pl)

So what? A dialogue between outgoing Prime Minister Peter Pellegrini and Interior Minister Denisa Saková was caught ‘on tape’ by microphones just before the start of a presser to discuss measures linked to the outbreak. “It’s going to be expensive,” the PM said, to which the interior minister replied: “So what? It’s gonna be them, who will need to find the money for it,” in reference to the incoming government. The tension between Pellegrini and Igor Matovič, who is currently in the middle of the coalition negotiation is rising these days. (Zuzana Gabrižová | EURACTIV.sk)

Turbulent day. As the number of cases crossed 100 – half are in Prague and one patient is in a serious condition – the government declared a state of emergency for the next 30 days. Czech nationals are banned from traveling to “high-risk” countries, including Germany, France, Austria and Belgium. Citizens from these countries are not allowed to enter the Czech Republic.

Both Prime Minister Andrej Babiš and Health Minister Adam Vojtěch are critical of the EU for how it has been dealing with the coronavirus crisis, blaming it mainly for insufficient coordination. (Aneta Zachová | EURACTIV.cz)

Police check quarantines. Police will monitor if people are sticking to quarantine measures and local mayors will be responsible for services to people in home isolation, the government said on its website. The Hungarian army will provide support to the police and disaster management authority in carrying out their tasks. The government website also confirmed another three cases of infection on Thursday bringing the number of confirmed cases to 16, with two of the new cases being Hungarian citizens and the third an Iranian national. (Željko Trkanjec | EURACTIV.hr)

Small-town mayor in solo budget. Relying on the  state of emergency, the mayor of Komló, József Polics, cancelled the meeting of the city council to then pass the city’s budget on his own. Polics is from the ruling Fidesz party, while the majority in the city council is commanded by the opposition. (Vlagyiszlav Makszimov | EURACTIV.com)

Emergency situation. The Bulgarian government proposed emergency measures late on Thursday, to be adopted by parliament. Prime Minister Boyko Borissov spoke, but his wording was unclear and the details were difficult to grasp. Krassen Nikolov takes a closer look.

Six new cases. A young man who contracted the coronavirus from his brother – who was Croatia’s patient zero – was released from a Zagreb hospital on Thursday after two consecutive negative tests. Six new cases were confirmed though, bringing the total number to 254, the national civil protection authority said. Read more.

Cases reach 11. BiH Presidency Chairman Željko Komšić that he would self-isolate following his return from Canada, where he met with PM Justin Trudeau, who decided to adopt the same procedure because his wife was diagnosed with coronavirus. (Željko Trkanjec | EURACTIV.hr)

Kosovo’s government overwhelmingly approved the creation of a Special Commission to prevent the spread of coronavirus. The government has shut down schools and cancelled flights to coronavirus-hit countries in Europe. Officially, no coronavirus case has been confirmed in Kosovo. (Željko Trkanjec | EURACTIV.hr)

Höcke’s ‘Wing’ under observation by federal authorities. The extreme right-wing faction of the Alternative for Germany (AfD), known as “the Wing,” has been classified as an ‘observation case’ by the Federal Office for Constitutional Protection (BfV), according to an announcement from the office yesterday morning. Sarah Lawton reports from Berlin.

François Fillon trial. Former Les Républicains presidential candidate François Fillon is facing five years in jail, as well as a €375,000 fine and ten years of ineligibility for fictitious employment of his wife Penelope Fillon. The sentence was requested by the National Financial Prosecutor’s Office. Nicolas Sarkozy’s former PM has pleaded for a release and a judgment is due 29 June. (EURACTIV.FR)

Calls to accept refugee children intensify. Professionals from across the country including scientists, artists, lawyers, representatives of NGOs and church institutions have called on the Austrian government to accept Syrian refugee children from the Greek camps in an open letter to Chancellor Sebastian Kurz (ÖVP). Sarah Lawton reports.

Moldova tie-up. The EU has a vested interest in forming strategic partnerships with its eastern neighbours like Moldova and in being open to their accession to the bloc, Prime Minister Viktor Orbán said after talks with his Moldovan counterpart. Hungary’s Eximbank will open a $100 million credit line to help finance Hungarian-Moldovan business cooperation. (Željko Trkanjec | EURACTIV.hr)

In other news, “Estonia and Hungary are working to ensure cyber stability, to make sure that norms and international law apply in cyberspace,” Estonian Minister of Foreign Affairs Urmas Reinsalu said after meeting with his Hungarian colleague Péter Szijjártó in Tallinn. Željko Trkanjec takes a closer look.

Here we go again. Prime minister-designate Florin Citu renounced his right to form the government just a few minutes before parliament was scheduled to vote on his cabinet. Due to the coronavirus, MPs were ready to vote for the centre-right government, despite their political differences. But Citu acknowledged he was not supposed to become prime minister. EURACTIV Romania’s Bogdan Neagu has the detail.

We cannot stop Hungarian television. The government should not restrict the distribution of Hungarian television programs in Slovenia, the government wrote in response to a parliamentary question by Jožef Horvat (NSi-EPP) on increasing Hungarian influence through new television programmes in some Prekmurje municipalities and measures to protect the majority nation and the Slovenian language in Prekmurje (on the border with Hungary). (Željko Trkanjec | EURACTIV.hr)

Enforcement over financial means to be aligned with EU legislation. The Croatian government on Thursday forwarded a final bill to the parliament amending the act on the execution of enforcement over financial means, to align it with EU law, Finance Minister Zdravko Marić said. The EU acquis, Marić added, stipulates that member states establish centralised mechanisms for retrieving data that has to include information on account holders, natural persons who are actual owners of account holder legal entities, natural persons authorised to dispose of funds in accounts, and on safes of all-natural and legal persons. (Željko Trkanjec | EURACTIV.hr)

Meanwhile, the opposition in the Zagreb City Assembly called Mayor Milan Bandić to finance a project to upgrade the third stage of wastewater treatment from EU funds instead of using more than 400 million kunas (€50 million) of taxpayer money. (Željko Trkanjec | EURACTIV.hr)

Kosovo challenge. Serbian Foreign Minister Ivica Dačić said on Thursday that “finding a political solution for Kosovo is a national priority, from which Serbia’s commitment to the Belgrade-Priština dialogue stems,” as well as that the lifting of tariffs on imports from Serbia was the key prerequisite for resuming the dialogue.

Giving a lecture to students of the Belgrade and Niš universities, Dačić said that Kosovo, besides being “a matter of utmost national interest, is our priority internal and foreign policy theme,” and the biggest political and security challenge, too. (EURACTIV.rs)

First terrorism indictment against Syria fighters. Bosnia’s Prosecutor’s Office on Thursday brought terrorism charges against Armen Dželko, one of the seven men who fought alongside terrorist groups in Syria and who were extradited last year after being held in prisons jointly controlled by the US and Kurdish forces, Hina reports. Read more.

Law on religion can be changed? Montenegrin President Milo Đukanović has not ruled out the possibility of amending the Law on Religious Freedom. “We will defend the principles on which we accept the law, but we are ready to hear good arguments from the other side,” Đukanović said, meaning the Serbian Orthodox Church.

Rifat Fejzić, leader of the Montenegrin Islamic Community, said that the law is not perfect, but the agreement is possible only if all parties enter into a dialogue with a desire to reach an agreement. (Željko Trkanjec | EURACTIV.hr)

Borrell wrote to Kurti. EU High Representative Josep Borrell wrote a letter to Kosovo’s Prime Minister Albin Kurti, urging him to fully drop tariffs on Serbian goods, so as to enable the resumption of the Priština-Belgrade dialogue.

“We need to have a full removal of the tariffs. In this context, I fully agree with you that past agreements and outstanding obligations need to be implemented in full. Serbia, like Kosovo, needs to uphold its past commitments in delivering on those agreements,” Borrell wrote. (Željko Trkanjec | EURACTIV.hr)