COVID-19 ‘shield’ for rule of law violations, for now 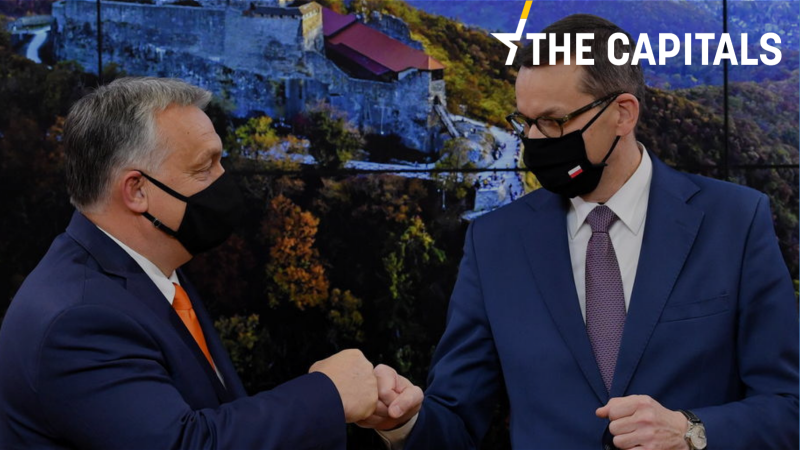 Before you start reading today’s edition of the Capitals, feel free to have a look at the article EU-AstraZeneca row heats up as Commission asks to publish contract, by Gerardo Fortuna.

Portugal’s Secretary of State for European Affairs, Ana Paula Zacarias, said on Wednesday that the procedure for assessing violations of the rule of law in Poland and Hungary may be delayed due to the Covid-19 pandemic. Read more.

Unemployment up by 7.5% in 2020. The number of unemployed people rose by 7.5% in 2020 despite a 2.7% drop in the fourth quarter, according to figures published Wednesday by the French labour ministry’s department. Read more.

Belgian solutions for border crossings. Hikers, runners or cyclists who briefly cross the border during their trip will not be targeted for breaching the COVID-19 travel ban by police services. Read more.

Austria deteriorated in corruption index. In the international corruption ranking published by the NGO Transparency International, Austria went down three spots and now sits at the 15th place. This is largely due to the aftermath of the so-called “Ibiza-affair”: In 2019, a video emerged where the head of the FPÖ offered a Russian oligarch certain benefits if he would help the party come to power.

In the following parliamentary inquiry, parts of the currently governing ÖVP have been accused of hiding cash flow from private donors, evidence is still being collected. The NGO demands that the government makes good on their promise to fight corruption. (Phillip Grüll, EURACTIV.de)

Finland becomes Hollywood substitute. Finland’s fairly low infection rate has made the country a safe and lucrative shooting location for foreign production companies as studios across the world have been forced to close due to the coronavirus pandemic. Read more.

Baltic states favour rail over recovery. Estonia, Latvia, and Lithuania are raising the stakes to secure EU funding for the Rail Baltica high-speed rail link connecting the three countries and continuing all the way to Warsaw, and may even be ready to block the EU’s €750 billion recovery package if funding for the rail project is not guaranteed. Read more.

However, the majority of Italians view the PM’s work in a positive light, according to a poll released on Tuesday. And four of five citizens of all political affiliations say they oppose early elections for fears related to the coronavirus vaccination campaign and to the management of the Next Generation EU fund, the poll found.

In other news, the Italian government will invest €81 million in an experimental vaccine against the coronavirus developed by Rome-based biotech company ReiThera to make the country less dependent on vaccines produced abroad, announced Italy’s special commissioner for the COVID-19 emergency, Domenico Arcuri. The first trials of the RaiThera vaccine led to encouraging results despite data and information for a more in-depth analysis not being available for now. (Daniele Lettig | EURACTIV.it)

Spanish anti-COVID drug around 99% effective. The antiviral drug known as Plitidepsna, which is being produced by Spanish company PharmaMar and tested in experimental laboratories in France and the US, showed a 99% reduction in SARS-CoV-2 viral loads. Read more.

Portugal registered 15,073 new coronavirus cases and 293 related deaths related to COVID-19 on Wednesday, the highest daily mortality rate since the start of the pandemic, according to the national health authority (DGS). (Cristina Cardoso, Lusa.pt)

In other news, protests erupted after the Polish government’s controversial abortion ruling became law. The Polish Constitutional Tribunal published on Wednesday a written justification of its controversial October ruling tightening the country’s already strict abortion laws, which the government published in the official law gazette later in the day, meaning it has since come into force.

In response, protests organised by the All-Poland Women’s Strike organisation, broke out across the country. Read more. A large demonstration in Warsaw and a complete blockade of the Polish capital were announced for Thursday. (Anna Wolska | EURACTIV.pl)

European border agency suspends activities in Hungary. The EU border agency on Wednesday suspended all operations in Hungary after the EU’s top court said the country had broken the law by preventing some migrants from seeking asylum, AFP reported. Read the full story. Read more.

Slovakia’s far-right splits, loses one MEP and five MPs. Six politicians of the far-right People’s Party Our Slovakia – including prominent MEP Milan Uhrík (Independent) and the rising star of the Slovak far-right, Milan Mazurek – are leaving the party after its leader, Marian Kotleba, attempted to secure his position as party leader. Read more.

Bulgaria allows indoor political meetings as restaurants remain closed. With parliamentary elections set for 4 April, the Bulgarian parliament has given the green light to allow party gatherings indoors despite the pandemic and the threat of highly contagious COVID-strains. Read more.

Romania’s budget deficit soars to 9.8% of GDP. Romania’s budget deficit widened to almost 9.8% of the country’s GDP, significantly more than the government’s estimate in November – as part of its third budget revision – that the deficit would reach 9.1% of GDP for the full year, making it even harder for the government to cut the deficit to 7% of GDP for 2021. Read more.

EU-US unity on Western Balkans restored, says EU envoy Lajcak. The exchange of territory between Serbia and Kosovo would be “very dangerous,” EU envoy Miroslav Lajčak told French newspaper Le Monde, adding that the EU was pleased that unity between the EU and the US regarding Western Balkans’ policies had been restored. Read more.

Elections in Srebrenica and Doboj to be repeated. The Court of BiH rejected all eleven appeals against the decisions of the Central Election Commission of BiH regarding the annulment of the elections in Srebrenica and Doboj, and the decision preventing the runner-up from assuming the mayoralty of Travnik after the winner of the local elections of October 2020 died from COVID-19 before taking office.

The Court’s decision confirms the electoral commission’s decisions of 21 January, meaning the commission is now expected to hold a session at which it will decide to hold repeat elections in Srebrenica and Doboj, and early elections in Travnik.  (Željko Trkanjec | EURACTIV.hr)

Pre-trial judge Nicolas Guillou denied the applications filed by the accused’s defence counsel in separate decisions, while Specialist Prosecutor Jack Smith alleged that the accused should not be granted interim release due to them posing a flight risk, potentially obstructing proceedings and committing further offences or possibly interfering with witnesses.  (Željko Trkanjec | EURACTIV.hr)