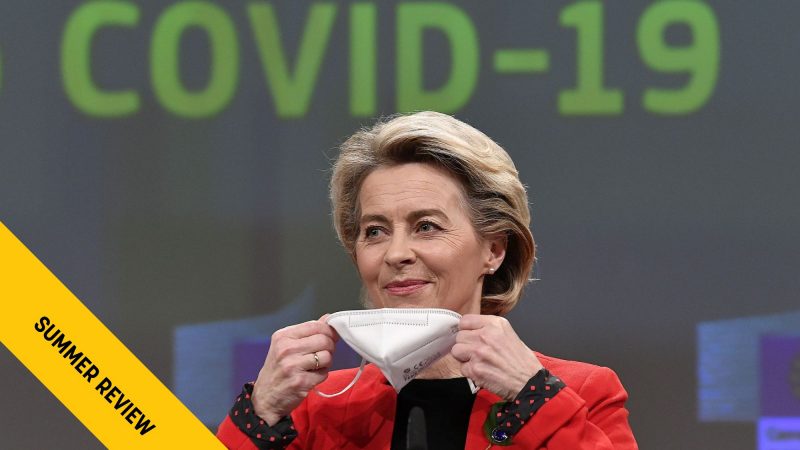 Even journalists need holidays, though whether we can use them to go anywhere these days is more complicated. For the second year in a row, lockdown measures have eased but staycations will be the norm across Europe.

As we pack our real and metaphorical bags for the summer recess, we offer a look back at some of the headlines that have dominated the first seven months of 2021.

The slow dash to vaccinate

The European Commission made a false start in the race to roll out COVID-19 vaccines, as delays to deliveries and rows with pharma firms left the campaign proceeding at a glacial pace. Meanwhile, across the water, programmes in the United States and, more uncomfortably for the EU, Boris Johnson’s UK, raced ahead.

That led to embarrassment in January and February when we reported that Commissioners were not consulted and their cabinets given less than 30 minutes for a “quick check” before the EU’s vaccine export control mechanism was tabled.

The proposal included a quickly scrapped clause that would have brought back internal border checks on the island of Ireland, a major political blunder that marked one of the lowest points in the Von der Leyen Commission.

The Commission has spent much of the year in catch up mode, while fighting legal battles against vaccine developer AstraZeneca.

Still, by the summer, 57% of adults across the bloc were reported to have been double vaccinated and some 70% received at least one jab. However, it also transpired that EU countries are throwing away thousands of unused vaccines.

Getting the cash flowing

After the torturous negotiations finally produced agreement on an €800 billion Recovery and Resilience Facility last year, the first seven months of this year have seen the wheels on the machine of approving and allocating the funds slowly turn. As we went to press, most national recovery plans had been signed off by the EU executive and billions of euros will start to hit national treasuries in the autumn.

Less clear is just how rigorous the auditing of this spending will be, with the Court of Auditors and others expressing concern that audit mechanisms are much looser than for spending social and cohesion funding.

On a less positive note, for the Commission at least, EURACTIV exclusively revealed how the executive had spent more than €462 million between 2016 and 2019 on consultancy contracts with PWC, KPMG, Deloitte and EY.

Move over GDPR, the new acronym in town is DSA. The Commission’s Digital Services Act is shaping up to be the bloc’s main push to tackle harmful online content following the adoption of an EU law that gives tech giants one hour to take down terrorist content.

Disinformation, and how to tackle it, is likely to preoccupy lawmakers for the remainder of the year, while others keep a close eye on elections.

In June, France announced it will launch an agency in September to combat foreign disinformation and fake news, less than a year before its next presidential election, while German authorities are also on high alert ahead of the parliamentary vote in September.

“Gas is over,” was the verdict of European Investment Bank chief Werner Hoyer in January – a statement that may take a while to realise, but was echoed in July by the Commission as it gave a boost to renewable energy by introducing a 2030 target of 40% in Europe’s energy mix.

This was part of the big ‘Fit for 55’ climate package, saved for the eve of the summer holidays. It tabled a root-and-branch review of the EU’s energy and climate laws, aiming to cut net greenhouse gas emissions by 55% before the end of the decade.

At the centre of the reform is a review of the EU carbon market, the emissions trading scheme (EU ETS), which should see the price of polluting increase – though as with its export control measure, complaints came from some Commissioners who said they had been bounced into endorsing the Fit for 55.

Trips to Moscow and Ankara of different scales of awkwardness underscored the shakiness of the EU’s role as a foreign policy player. After the empty chair treatment and propaganda monstering suffered by Von der Leyen and Josep Borrell, MEPs argued that a European Diplomatic Academy would help overcome the growing pains of its foreign policy-making.

In the meantime, oft–derided European Council boss Charles Michel has carved out a name for himself in the South Caucasus (that one unravelled fast) and the Western Balkans, though with questionable success.

You, our dear macabre readers, couldn’t keep away from one of our more quirky and most popular stories.

For those who ask whether we are all, indeed, doomed, the answer is that after more than a year of COVID-19 and an ongoing climate crisis, the symbolic Doomsday Clock is stuck at the same time as last year: 100 seconds to midnight. That is the closest we have ever been to Armageddon, but I guess it depends on whether you view the glass as half full or half empty…

With the analogue age of physical events and the breakfast briefings so beloved of Brussels policymakers and, less so, the city’s hacks, still yet to return, EURACTIV’s online events continue to make waves. Trust in the Digital Decade – Making sure technology serves EU citizens, The Future of Work after the pandemic and a plethora of debates on climate change and the reform of the EU’s emissions trading scheme are just a few of our highlights.

The EURACTIV YouTube channel has also gone from strength to strength covering Sofagate, cohesion policy and everything in between.

Bumpy ride in the Channel

The pandemic has not been the only constant. As sure as night follows day, the Brexit gift keeps on giving (or not giving).

Lest we forget, after over four years of hurt, the EU and UK’s Trade and Cooperation Agreement came into force on 1 January. Trade is, inevitably, down. Of course, like the proverbial that won’t flush, economic self–interest is of secondary importance to both sides. Implementing the new regime has further cooled already icy relations.

To news of Royal Navy boats in the Channel to patrol French fishing boats, a dispute over the EU delegations’ diplomatic status in London and the UK now threatening to tear up the Northern Ireland protocol unless the EU agrees to renegotiate parts of it, there can be only one reaction. Plus ça change…

One thing we can be certain of is that when we return, the Tokyo Olympics will be over and the European Commission’s spin machine will have cranked out a press release celebrating the fact that the EU27 combined won more medals than any country.

On that note, we bid you farewell until business resumes on 16 August with a series of articles looking at what is coming up in all areas of EU policy.