A man cycles in front a huge election posters with a picture of Croatian Prime Minister Andrej Plenkovic of Croatian Democratic Union (HDZ) in Zagreb, Croatia, 02 July 2020. Croatian people will vote for a new Parliament and Government on 05 July 2020. [EPA-EFE/ANTONIO BAT]

Croatians will choose their next prime minister in a parliamentary election on Sunday  (5 July) pitting conservative incumbent Andrej Plenković against the centre-left opposition leader Davor Bernardić.

The vote is set to be a tight race between Plenković’s HDZ and the coalition led by Bernardić’s Social Democrats (SDP), according to polls.

With neither camp expected to win an outright majority, the new right-wing party of folk singer Miroslav Skoro, slated for third, could play a kingmaker role in the formation of a new government.

Here are the three key players in Sunday’s vote:

When conservative Prime Minister Andrej Plenković took over the top executive post in 2016, the articulate politician was celebrated in the press as a “son-in-law that any mother would like to have”.

But many say the 50-year-old polyglot, known for a calm demeanour, remains more popular in Brussels than at home.

A moderate in his own party, Plenković is battling a hardline wing of HDZ that has branded him a “European technocrat” and a “Brussels nerd”.

Influential Catholic groups also accuse him of betraying Christian values, with policies such as the ratification of a European treaty designed to protect women which they claim would legalise same-sex marriage.

On the other side, left-wing critics accuse Plenković of lacking the courage to tackle the rise of nostalgia for Croatia’s pro-Nazi past, with symbols, slogans and songs from that era making a comeback among far-right groups.

Born in Zagreb, Plenković studied law and joined the foreign ministry in 1994 with postings in Brussels and Paris.

Before becoming an MEP he worked at the ministry to secure Croatia’s entry into the European Union in 2013.

Described as ambitious and hard-working by former colleagues, Plenković took over HDZ in July 2016, just two months before the party won a snap vote.

The married father-of-two is now hoping to capitalise on his government’s relatively successful handling of the coronavirus outbreak in Croatia.

Davor Bernardić, who took over the SDP in 2016, is seen by many as the weakest link in his party, where he has faced efforts to replace him.

The 40-year-old Zagreb native, known as ‘Bero’, often highlights a modest upbringing that forced him to work part-time in high school.

Yet critics point out he has spent his whole career in politics, joining SDP as an 18-year-old before gradually rising to the top.

While SDP’s popularity has been growing since their former leader Zoran Milanovic was elected president in January, Bernardić has not enjoyed the same affection.

Critics, including within SDP, say he lacks charisma and real world experience.

Allies nevertheless praise the politician, an MP since 2008, for perseverance and energy.

They say his working-class background helps him understand “ordinary men” and that he has entered politics “from the cold Zagreb streets rather than warm Brussels corridors”, in a reference to Plenković.

A popular folk singer and businessman, Miroslav Škoro made his political debut in the first round of the presidential election in December.

Running as an independent and riling up a right-wing electorate, he placed in third with around 20 percent of the vote.

Encouraged by the results, 57-year-old Škoro founded the right-wing ‘Homeland Movement’ party in February and said it was aimed at “ending the HDZ-SDP duopoly”.

The two parties have ruled Croatia since its 1991 independence, mostly led by HDZ.

Škoro, whose patriotic folk tunes were a hit during and after Croatia’s independence war, threatens to lure traditional HDZ voters who are disappointed with Plenković’s more moderate policies.

He recently welcomed a controversial court ruling that deemed a right-wing singer’s use of a pro-Nazi salute legal.

And he outraged women by saying that those who become pregnant after being raped “must decide in agreement with her family what she will do”.

Many women, including public figures, responded by posting pictures on social media of themselves symbolically giving the middle finger to Škoro and others with similar views.

The 57-year-old former HDZ member was briefly an MP and a diplomat.

Born in the eastern town of Osijek, Škoro studied civil engineering and later finished a PhD in economics.

In late 1980s and early 1990s he spent some time in the US where he met his wife. They have two children. 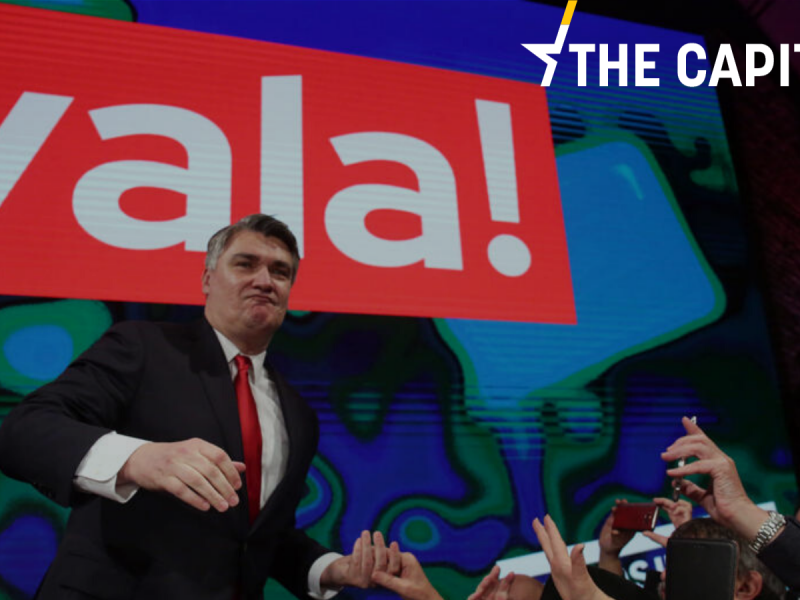 Before you start reading today’s edition of the Capitals, we invite you to read Alexandra Brzozowski’s story …