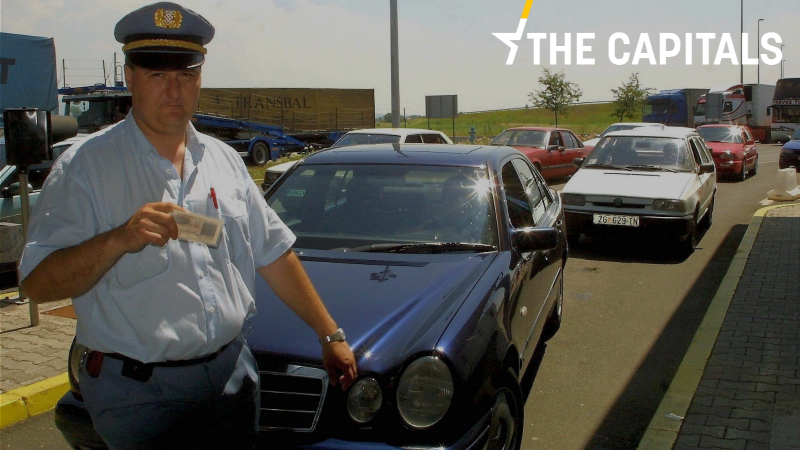 Croatia obtains nod from the European Commission regarding Schengen accession.

Before you start reading The Capitals, take a look at Gerardo Fortuna’s story on digital farming: EU auditors, not just lawmakers, recognise the potential of digital farming tools, and Alexandra Brzozowski’s interview with the new head of EU’s cybersecurity agency, ENISA, on the political need for 5G cybersecurity certification.

Croatia gets positive assessment for Schengen accession, knows it might have to wait. “This is an important day, and yet another big European success for Croatia,” Prime Minister Andrej Plenković said after the European Commission delivered its assessment that Zagreb meets the conditions to join the Schengen area.

“In the technical sense, today we received objective verification, by the only institution in charge, that we are prepared,” the PM said. However, Bulgaria and Romania had obtained a positive assessment from the Commission in 2011 but are still not in Schengen because there is no consensus among the member states.

The Commission said in a statement on Tuesday that “Croatia has taken the measures needed to ensure that the necessary conditions for the full application of the Schengen rules and standards are met”.

Asked when Croatia would join Schengen, Plenković refused to “speculate on a precise date” but warned that “it is not realistic” that Croatia will join during its EU presidency in the first half of 2020.

As for a possible blockade of Croatia’s accession by Slovenia, Plenković said the border dispute with Slovenia was “bilateral in nature”. “We will try to separate such bilateral issues from this one because this is something we should resolve with Slovenia differently, through dialogue and by looking for a solution with which both sides will be satisfied,” he added.

Conversely, Slovenia, which had already hinted it might block Zagreb’s accession, reacted differently.

“We regret that the European Commission decided on such an important matter, the assessment of Croatia’s preparedness to join Schengen, just before the end of its term and that it adopted a political decision,” said Slovenian Prime Minister Marjan Šarec.

“We expect Croatia to meet all the conditions, technical and legal ones, including respect for the rule of law,” he said, alluding to the implementation of an international arbitration ruling on the joint border, which Croatia continues to reject.

Slovenia’s outgoing Commissioner Violeta Bulc said the member states would have the final say, including the government in Ljubljana. “The final assessment should also take into account the progress to be made in the areas of migration policy, protection of external borders, the rule of law and good neighbourly relations,” Bulc stated. (Željko Trkanjec | EURACTIV.hr)

Germany’s Syria proposal ‘irritates’ partners. Federal Defence Minister Annegret Kramp-Karrenbauer (CDU) surprised and “irritated” her coalition partners and allies abroad with her push for a security zone in Syria. Foreign Minister Heiko Maas (SPD) said in Berlin that the move had “caused a certain irritation among our partners”.

He himself still had many questions and pointed out that there was currently “no discussion among partners about the establishment of an international protection zone” in the region.

Chancellor Angela Merkel (CDU), however, supported the initiative. “I find the idea of a protection zone in northern Syria very promising, even if many questions remain unanswered,” Merkel said.

She called the idea “definitely worth trying” but warned that a prerequisite for deployment in Northern Syria would need to be mandated by the United Nations. On Monday (21 October), Kramp-Karrenbauer proposed to establish an international safety zone with the aim of continuing the fight against the Islamic State (IS) and stabilising the region. (Claire Stam | EURACTIV.de)

A call for dialogue. Catalan president Quim Torra publically condemned on Tuesday (22 October) “all kinds of violence” during riots in Catalonia over the past few days. Torra called on acting Prime Minister Sánchez to open a meaningful dialogue “without preconditions” to find a “political and democratic” solution for the conflict in Catalonia.

Meanwhile, the pro-independence political groups in the Catalan Parliament put forward a new resolution against the Court ruling sentencing a dozen of political representatives to prison and in defence of the region’s self-determination. (Beatriz Rios | EURACTIV.com)

New scandal for Macron: The timing could not have been worse. After Sylvie Goulard was rejected by MEPs to take on the Commissioner post for ethical reasons, the European adviser of French Prime Minister Edouard Philippe, Italian Sandro Gozi, was pinned for collaboration with the Maltese government.

According to information published on 21 October by the Maltese daily Time of Malta, which was republished by Le Monde, Matteo Renzi’s former secretary of state for European affairs concluded a consultancy contract in June 2018 with the head of Maltese government, Joseph Muscat. This information was confirmed by Muscat’s spokesperson. But on 30 July 2019, the Italian politician went on to join Edouard Philippe’s cabinet. He was also elected as MEP for Macron’ party in the European elections but will have to wait until Brexit is concluded before he can take his seat in the European Parliament.

According to Edouard Philippe, Gozi has been asked “to provide the most complete and precise explanations,” and “proof of his contract with the Maltese government having been terminated”.  (EURACTIV.FR)

No mafia in Rome? A controversial ruling by the Italian Supreme Court of Cassation dropped the charges of mafia-style association in the so-called ‘Mafia capitale’ proceedings. According to Rome’s Chief Prosecutor, there was a network of corrupt relationships between politicians and criminals in the capital. Former Rome mayor Gianni Alemanno and several members of criminal gangs were being investigated.

But the Italian highest court acknowledged the existence of common racketeering, as opposed to the existence of a mafia-like organisation. Thanks to links with local administrators, the criminal association awarded public contracts, including for managing immigrant reception centres, which was renamed the “migrants’ business” by the participants. (Gerardo Fortuna | EURACTIV.com)

Pole position: Greece scored the top position relative to GDP among countries that boosted investments by the Juncker Plan’s European Fund for Strategic Investments (EFSI), according to data presented by the outgoing EU executive on Tuesday (22 October). Greece benefited from €2.7 billion in funding from the European Investment Bank, which will trigger investments worth a total of €12.1 billion.

Subway time: The good news broke as PM Kyriakos Mitsotakis visited Thessaloniki, the second-largest city, and announced that the long-anticipated metro system, under construction for years, will be fully operational within four years. Shortly after that, a court gave the green-light to the much anticipated Athens’ Metro Line 4 tender, which had been embroiled in legal problems. The new line will serve more than half a million citizens per day. (Theodore Karaoulanis | EURACTIV.gr)

The UK government has paused its Brexit bill, following a parliamentary majority against Johnson’s planned timetable for getting his Withdrawal Bill adopted.

Should the EU grant the UK an extension, No 10 will push for a general election, EURACTIV understands.

EU Sources say that the most likely outcome is for the UK to grant an extension until the end of January 2020. Such a prolongation would allow a general election to be held in November.

Following the vote, Council President Donald Tusk said he would recommend the notion of an extension to EU27 leaders. He added that he would “propose a written procedure”, meaning that EU leaders would not be required to convene in another Brussels sitting to make the decision. (Samuel Stolton | EURACTIV.com)

WARSAW
The effects of Brexit. According to the government-affiliated Polish Economic Institute (PIE), Poland will be among the countries most affected by Brexit, regardless of its final arrangements. In case of a Brexit with a deal, the decreased value of exports will contribute to the Polish GDP falling by 0.14%, while a no-deal Brexit would shave off 0.25% of the GDP. In total, Brexit can cost Poland 20-35,000 jobs. According to the report, the agri-food industry is set to lose the most, as it constitutes around 20% of all exports from Poland to the UK. (Łukasz Gadzała | EURACTIV.pl)

Read more on Brexit and EU citizens in our Special Report.

Scrapped from EU’s list. Slovakia’s pipeline project, which is to diversify gas supplies and routes in Central and Eastern Europe as of 2025, has been dropped by the European Commission from the new draft list of Projects of Common Interest. Eastring, whose cost is estimated at €2.6 billion, is meant to increase the revenues of the Slovak gas transit company Eustream following the slump they have been facing since the launch of Nord Stream 2. If the European Parliament and Council validate the Commission’s proposal, Eastring may have more difficulties in raising funding and obtaining regulatory permits. (Pavol Szalai | EURACTIV.sk)

Tough negotiations for a new government. The centre-right PNL (EPP) is still negotiating with other parliamentary parties to garner the support needed to install a new government, two weeks after it successfully attempted to topple the socialists from power. Ludovic Orban, the head of PNL and the designated PM, said major steps had been taken on Tuesday as collaboration frameworks were established. However, the new government won’t be in place this week, as hearings of the ministers will only take place next week, political sources told EURACTIV Romania. (Sebastian Rotaru, EURACTIV.ro)

Vote for cash. A total of 11% of Bulgarians admitted that they would vote for a certain candidate in exchange for cash or in case of a personal threat. This would mean more than 600,000 people from about 5.5 million Bulgarians eligible to vote.

Approximately 81% of Bulgarians said they would not trade their civil rights, and 8% were uncertain. This is according to a sociological survey of the Gallup International’s Bulgarian office, conducted on the eve of the local elections in Bulgaria.

The poorest Bulgarians and the Roma minority are most likely to trade their political rights, with about 40% of them being prepared to vote for a fee. According to unofficial information, poor Bulgarians and Roma are ready to vote against certain candidates for sums between €75 and €100. (Krassen Nikolov | EURACTIV.bg)

US supports Bosnia’s drawing closer to NATO. The US administration supports Bosnia and Herzegovina’s NATO membership bid, and that is why it is important to prepare the Annual National Programme (ANP) of reform. But Washington also wants to see that the government is formed as soon as possible, based on the results of the parliamentary elections held in October 2018, according to a statement released on Tuesday (22 October) after a meeting between Prime Minister Denis Zvizdic and Mathew Palmer, the special envoy of the US State Department for the Western Balkans. Bosnia’s Serb entity is strongly against progressing towards NATO membership. (Željko Trkanjec | EURACTIV.hr)