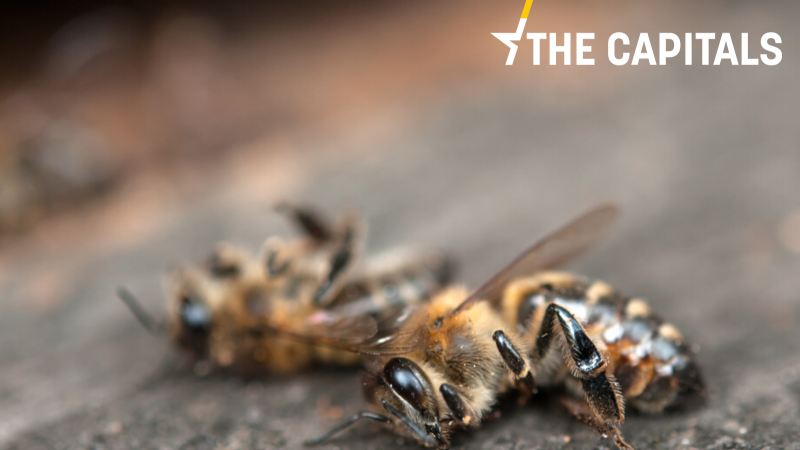 Croatian beekeepers were shocked and devastated by the tragedy. [Shutterstock/Perutskyi Petro]

Before you start reading today’s edition of the Capitals, feel free to have a look at the Op-Ed by Polish Prime Minister Mateusz Morawiecki, which was written exclusively for EURACTIV.

Also read an interview with Commissioner for Jobs and Social Rights, Nicolas Schmit, who said: “I read somewhere a nurse saying, well, it’s nice to applaud us but this does not pay our bills […] We have to have this debate in our societies about the value of certain professions.”

Now that many European countries have started lifting lockdown measures and opening borders, make sure you stay up to date with EURACTIV’s comprehensive overview, which is regularly updated with the help of our network of offices and media partners. Also, check our country update pages, such as the ones for Lithuania and Belgium.

ZAGREB. More than 50 million bees have been found poisoned in the northern county of Međimurje, which borders Hungary. As a result, County Prefect Matija Posavec declared a natural disaster for a part of Međimurje county on Monday (15 June). Veterinary inspectors and forensic scientists are looking into what caused all these deaths. EURACTIV Croatia’s Karla Junicic has the full story.

US-NATO Ambassador: America remains deeply committed to Europe. There is no sign of a US retreat from Europe’s security structure, the US Ambassador to NATO told EURACTIV, commenting on Washington’s troop withdrawal plans from Germany. Read the interview here.

The app has generally been well-received across the political spectrum and by data privacy activists, who have praised its decentralised approach as well as its open-source code that was made available online weeks ago. (Sarah Lawton | EURACTIV.de)

France plans to relocate its sanitary industry. French President Emmanuel Macron announced on Tuesday (16 June) during a visit to a Sanofi plant in the Rhône region that the government has plans to relocate the sanitary industry. The president took the opportunity to bury the hatchet with the pharmaceutical group following a controversy sparked by the statements made by the company’s boss last month. EURACTIV France digs deeper.

Medical experts hail new COVID treatment. UK medical experts have hailed a low-dose steroid treatment dexamethasone as a major breakthrough h in the fight against the coronavirus. The drug, which has been trialled by Oxford university researchers over the past month, cut the risk of death by a third for patients on ventilators, and cut fatalities for patients on oxygen by a fifth. A ten-day course of the drug only costs £5.40 (€6).

“This is the only drug so far that has been shown to reduce mortality – and it reduces it significantly. It’s a major breakthrough,” said Chief investigator Prof Peter Horby. The government has stockpiled 200,000 courses of the drug and said on Tuesday (16 June) that the NHS will make dexamethasone available to patients. (Benjamin Fox | EURACTIV.com)

Brussels Airlines resumes flights with increased checks. Lufthansa-owned Brussels Airlines restarted operations to travellers with non-essential journeys this week as European internal borders reopened, and it already reported full planes after the first day. The airline had 22 flights on 15 June, according to the company’s CEO, but a first passenger with coronavirus symptoms was refused at Brussels Airport, as thermal cameras determined that their body temperature was higher than 38 degrees. To guarantee the safety of passengers and staff, the body temperature of all passengers is checked before they are allowed to enter the terminal. (Alexandra Brzozowski | EURACTIV.com)

Government presents fiscal ‘crisis programme’. Having spent two days in “governmental retreat”, Austria’s executive branch left the chancellery with a new set of fiscal support measures ready to be presented. All in all, a total of €19 billion will be spent on “rescue, relief and investment”, Finance Minister Gernot Blümel (ÖVP) told a press conference. The package would raise Austria’s debt to 90% of its GDP.

Measures include one-off payments to unemployed and families, a degressive tax-depreciation mechanism and a prolongation of emergency subsidies on businesses’ fixed costs. Vice-Chancellor Werner Kogler (Greens) emphasised the package’s €2 billion, which will be spent on climate-friendly building reconstruction, renewable energy production and research into climate-friendly technology, among other things. The agricultural and forestry sectors will also benefit from the package. (Philipp Grüll | EURACTIV.de)

Finland comes on top in digital skills. For the second year running, Finland is leading the pack in terms of digital performance and competitiveness, according to this year’s Digital Economy Index (DESI) published by the European Commission. As the coronavirus crisis demonstrated the importance of a digital European economy, with distance working and learning becoming the new norm, the results could serve as a wake-up call for the Union. EURACTIV’s Pekka Vänttinen has the story.

Night before exams. Italy will have its first day of high school exams today (17 June), with about 500,000 students set to take the test. The new format, approved by the government on 9 June, consists of a multidisciplinary oral test, which can last up to one hour. EURACTIV Italy’s Alessandro Follis looks into what other rules apply.

Government greenlights €16 billion ‘COVID-19 Recovery Fund’. The Spanish coalition government of PSOE’s socialists and left-wing Unidas Podemos/United We Can, approved a special package worth €16 billion, EURACTIV’s partner EFE reported. The package will be directly transferred to Spain’s autonomous communities to help them mitigate the economic impact of the coronavirus pandemic, particularly for the tourism and services sectors, two essential elements of Spain’s GDP and key drivers of its growth. EURACTIV’s partner EuroEFE breaks it down for you.

In other news, government sources quoted by the daily El País said the government is considering extending the deadline of the current temporary lay-off schemes  (Expendiente de Regulación Temporal de Empleo, ERTE) until the end of September, with certain conditions, EFE reported. After the current 30 June deadline, Spanish trade unions fear there will be mass redundancies, as CCOO, one of Spain’s two largest trade unions stressed on Tuesday.

Under ERTE, employers can send workers home without pay for a limited period of time but must take them back once this period ends. During this time, employees can claim unemployment funds from the Spanish Social Security and companies can also put staff on part-time to offset losses. (Fernando Heller | EuroEFE.EURACTIV.es)

Greece, Israel re-confirm EastMed pipeline project. Greek Energy Minister Kostis Hatzidakis and his Israeli counterpart Yuval Steinitz signed a Joint Declaration on Energy Cooperation on Tuesday in Jerusalem, in view of joint projects that will enhance the two countries’ energy security. Both sides re-confirmed the construction of EastMed pipeline and a number of other energy projects. Read more on Athens-Macedonian News Agency.

In other news, Hungary’s national data protection authority has fined the DIGI telecommunications company almost €288,000 after two databases containing a large number of customer data became accessible as a result of the company’s inadequate data protection measures, hwsw reported. Despite reporting to the authorities as soon as the company became aware of the issue and continued cooperation, the firm received the biggest Hungarian data protection fine to date.

Meanwhile, Romanian Prime Minister Ludovic Orban said he is ready to turn to the European Commission because Hungarian border authorities are stopping Romanian citizens who are trying to cross the country for employment purposes in Western Europe, maszol.ro reported.

The Romanian PM said he had received many complaints that Hungarian authorities are turning back those who do not carry the original copy of their employment contract, which, according to him, discriminates Romanian citizens and impinges their freedom of movement.

A letter from Agrofert. Giant agrochemical holding and major play in the media sector, Agrofert, has rejected the budgetary control committee’s statement which says that Czech PM Andrej Babiš is embroiled in a conflict of interest as he still controls the holding after placing it into trusts in 2017, according to a letter addressed to European Parliament President David Sassoli seen by the Czech News Agency.

Agrofert states that the claim is not supported by evidence and any limitation imposed on subsidies provided to the holding would unjustly disadvantage it against its competitors.(Aneta Zachová | EURACTIV.cz)

No to European taxes. Slovak business lobby and member of BusinessEurope, the Republic Union of Employers (RÚZ), urged the country’s finance ministry to reject plans for new so-called “European taxes”. The term refers to the EU’s own set of resources, which the European Commission is contemplating as a way of financing the EU Recovery Plan, including digital tax, single market tax, carbon adjustment mechanism, ETS-based revenue, tax on plastics.

Instead, according to the employers’ group, the resources needed for the economic stimulus should come from cuts and savings. (Zuzana Gabrižová | EURACTIV.sk)

Zhelyazkov said the government couldn’t replace consumer demand but could create the necessary conditions to boost it and thus support businesses. During the state of emergency which lasted from 13 March to 13 May, a total of 84,500 Bulgarians had lost their job, while 65,500 unemployed people had started work. When it comes to the tourism and transports sector, 17,300 and 5,000 respectively became jobless. (Krassen Nikolov | EURACTIV.bg)

BUCHAREST
State of alert is extended, but with new restrictions lifted. Romania’s government extended the state of alert by 30 days as of Wednesday (17 June), but some of the restrictions applied so far can now be lifted.

Church services are now permitted indoors, while respecting social distancing rules, and kindergartens, child daycare facilities and after-schools can restart their operations. Also, malls are reopening, and people can now go back to fitness and sports centers. However, theatres and cinemas remain closed, and restaurants can serve meals only on terraces.

Kosovo’s independence will not be on the table, says president. Serbian President Aleksandar Vučić dismissed claims on Tuesday (16 June) that the outcome of the 27 June meeting with his Kosovo counterpart, Hashim Thaci, in Washington would have anything to do with Belgrade’s recognition of an independent Kosovo, stressing that it would not even be discussed and that Serbia wouldn’t even allow it on the table. EURACTIV Serbia looks into it.

Meanwhile, European Commission spokesman Peter Stano said on Tuesday (16 June) that the Kosovo dialogue mediated by the EU is the main platform for both to reach a final agreement so that they can move forward on EU accession, adding that the EU, like the US, wants to stabilise the region.

With regard to the Kosovo issue, Russian President Vladimir Putin advocated a compromise solution approved by the UN Security Council, according to a release from the Kremlin. Read more. “In a thorough exchange of views on the Kosovo issue, Putin backed generating a compromise solution acceptable to Belgrade, which would have to be approved by the U.N. Security Council,” the Kremlin said in a statement on 15 June.

Kosovo has no time to waste, says president. Kosovo President Hashim Thaci said on Tuesday (16 June) that Kosovo had no time to waste due to stagnation or hesitation and that it had to become a member of the UN, EU and NATO as soon as possible. Read more.