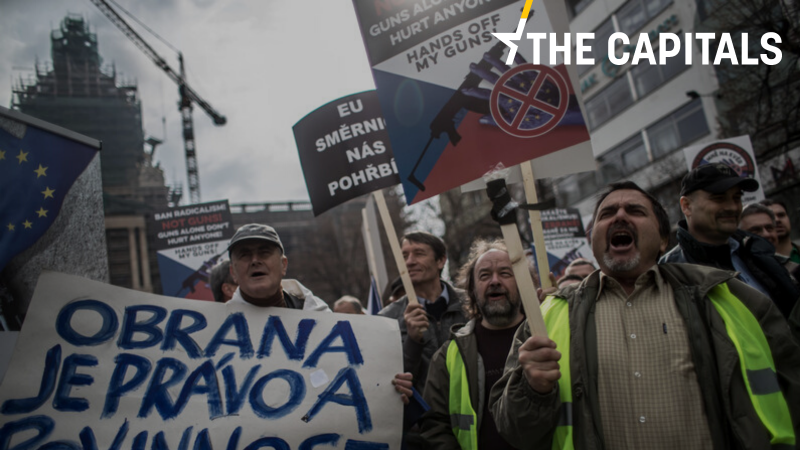 Before you start reading today’s edition, feel free to have a look at the article EU gives Turkey one month as pressure for sanctions mounts by Sarantis Michalopoulos and Benjamin Fox’s piece on Race for the WTO hot-seat leans toward Africa.

Spahn encourages vigilance, especially on holiday. Health Minister Jens Spahn (CDU) reiterated the need for vigilance and adherence to coronavirus rules on Monday (13 July), noting that “the danger of a second wave is real […] We should not feel a false sense of security” and emphasising that those on holiday should not be overconfident. His warning came after images surfaced over the weekend of German tourists flouting COVID-19 regulations at the beach-front Ballermann party area on the Spanish island of Mallorca

“We must be very careful that Ballermann does not become a second Ischgl,” he said, referring to the Austrian ski resort that became a COVID-19 hotspot in March. Health experts are now advocating for mass testing and mandatory quarantine for those coming back from the island. Read more about the situation in Germany’s favourite party island here.

Racist incidents see record high in June. In Austria, 500 incidents of racial discrimination were reported in the month of June, which is a new record for the country, according to anti-racism NGO ZARA (Civil Courage and Anti-Racism Work).

However, this increase does not point towards more racism in Austrian society, but rather to a decreased willingness to bear it, according to ZARA. The NGO’s speaker, Meike Kolck-Thudt, said she suspects this has to do with the Black Lives Matter movement, noting what is currently visible is a bit more than just the “tip of the iceberg”. (Philipp Grüll | EURACTIV.de)

Unions sign off major healthcare plan. After more than six weeks of negotiations, the €8.1 billion healthcare plan known as “Ségur de la Santé” has finally been approved by healthcare representatives. “This historic effort is first and foremost a considerable recognition of those who have been on the frontline in the fight against this pandemic,” said the new Prime Minister, Jean Castex.

At the height of the pandemic, French President Emmanuel Macron had promised to support healthcare staff. The newly approved healthcare plan mainly concerns the salary scale for healthcare personnel, including paramedical and non-medical staff.

Health experts warn of rising infection rate. The number of new infections increased slightly for the third day in a row, with an average of 90 people per day testing positive for COVID-19 in Belgium during the past week, according to figures by the Federal Public Health Service on Monday.

The country’s top virologist, Marc Van Ranst, warned the situation is “going in the wrong direction.” “We have been observing an increase for several days now, but because we are working with weekly averages, that rise doesn’t seem to be that big at all,” infectious disease expert, Erika Vlieghe, told Het Nieuwsblad.

Both experts told a special coronavirus commission of the Flemish parliament that Belgium’s COVID-19 response is likely to be insufficient if a second wave occurs.

Italy’s birthrate hits record low. While Italy’s births in 2019 hit a record low since the country’s unification, its deaths and number of people moving abroad increased during the same period, according to data published on Monday (13 July) by the national statistics office ISTAT. EURACTIV Italy’s Alessandro Follis has more details.

>> Read also: For Italy, time is of the essence, Conte tells Merkel

Continued restrictions. The Portuguese government will maintain restrictions in the Lisbon region because of the COVID-19 pandemic for another two weeks, despite the “downward trend” in the number of new virus infections. (Fábio Canceiro e Rosa Carreiro, Lusa.pt)

In other news, forest fires in Portugal have so far burned 60% less area than in the same period of 2019, according to provisional data from the Institute for Nature and Forest Conservation. (Célia Paulo, Lusa.pt)

Leaders coordinate next moves. Cypriot President Nikos Anastasiades is visiting Athens today to meet with Greek PM Kyriakos Mitsotakis. The aim of the visit is to coordinate their moves in view of the diplomatic battle against Turkish provocations.

Both countries have expressed their satisfaction with the outcome of an EU foreign affairs ministers’ meeting on Monday (13 July). However, in light of Turkey’s unpredictable behaviour, the two countries aim to be on alert during the summer as Ankara has announced its intention to start drilling activities in Greece’s Exclusive Economic Zone.

After congratulating Duda, Trzaskowski called on the president to “free himself from his political party”, adding that he “hopes the president will display more independence in his second term.” (Alexandra Brzozowski, EURACTIV.com)

Mig-29 crash caused by lack of fuel, investigation shows. A Slovak Air Force Mig-29 fighter jet crash in September 2019 was caused by a lack of fuel, according to an investigation led by the Slovakian authorities. The conclusions of the investigation have been made public by Slovak Defence Minister Jaroslav Naď (OĽaNO), who stated that the “accident” was “not the result of a technical malfunction”. The pilot survived.

The Slovak Armed Forces are in the process of replacing the Russian Mig-29 jets with US      F-16s. (Zuzana Gabrižová | EURACTIV.sk)

Railway with Serbia suspended. The Hungarian national railway company, MÁV, said that from Tuesday (14 July) all services between the country and Serbia will be suspended indefinitely due to the pandemic, Hungary Today reported. MÁV also said in a statement that Serbia’s railway company is suspending rail services at the Kelebia border crossing from the same day.

A ‘somewhat smaller’ government. Prime Minister Andrej Plenković, said on Monday that the new government would be ‘“somewhat smaller” than the previous one and its members will be known on Thursday.

According to Croatian daily Jutarnji list, the government will have a maximum of 16 ministries, with MP Boris Milošević taking on the deputy prime minister role, but without a ministry. Gordan Glrić Radman – a key figure during Croatia’s EU presidency stint – will remain Foreign Minister, while Gordan Jandroković will remain parliament speaker. The PM said he intends to convene a parliamentary session on 22 July. (Karla Juničić, EURACTIV.hr)

No apology for Srebrenica tweet. An opposition Social Democrat MP asked the national assembly speaker on Monday to call on Prime Minister Janez Janša “to apologise to all the victims of Srebrenica for the insulting tweet he wrote a few days ago”.

Janša tweeted that the 1995 Srebrenica massacre would not have occurred had the United Nations condemned post-WWII ‘communist genocide’, the way it condemned the Holocaust, drawing criticism at home and abroad. EURACTIV’s Zoran Radosavljević has more.

Bulgaria’s prosecution requests inspection of Lukoil’s port. An inspection into the concession agreement for the Lukoil Bulgaria port, which was signed nine years ago during Boyko Borissov’s first government and where nearly one-third of the country’s oil is unloaded, has been launched by Bulgaria’s prosecutor’s office. Russian oil company Lukoil owns the largest oil refinery in the Balkans, near Bourgas. EURACTIV Bulgaria’s Krassen Nikolov takes a closer look.

Restrictions to continue. Romania will most likely extend the state of alert beyond 15 July, as the number of COVID-19 infections is still high, health minister Nelu Tataru said. He added that the measures will not be eased for the time being, and some cities or regions could be locked down, if needed.

The fact that 12 countries impose special restrictions on people coming from Romania should draw some attention, the minister said, adding that Romanians need to observe the restrictions and protect themselves and not listen to those who downplay the epidemics.