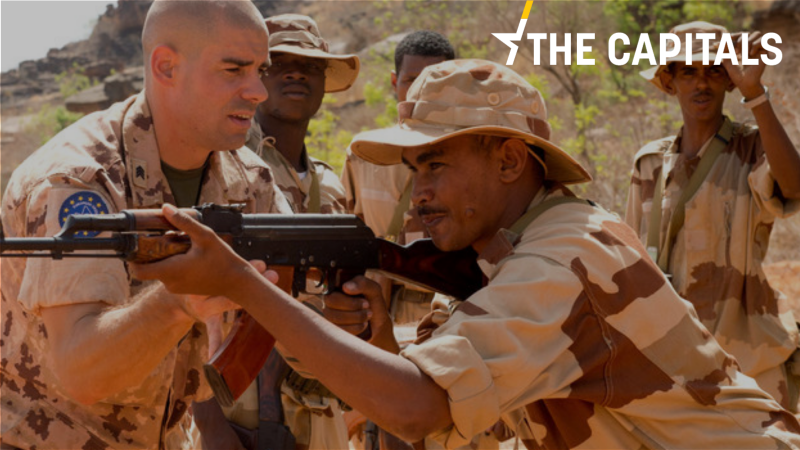 Such strategic communication – not only in Mali but also in other parts of the world – is among the top priorities of the Czech defence ministry. [EPA/MAURIZIO GAMBARINI]

Russia is trying to “convince Malians that the EU occupies Mali” and is “very active in this matter” Deputy Defence Minister Jan Havránek has warned about how Russia is portraying the EU’s training mission in Mali (EUTM Mali). Read more.

EU considers debt relief for countries hit by floods, wildfires. The emergency costs related to this summer’s floods and wildfires could be classified as “a one-off” expenditure and therefore excluded from the calculation of EU countries’ public deficits this year, the European Commission has said. Read the full story.

Last pipe of Nord Stream 2 pipeline welded, ready to enter operations in 2021. Nord Stream 2, the project which had caused severe tension between the EU and the past administration of former US President Donald Trump, is now almost complete and ready to start funnelling Russian natural gas straight into Germany. Read more.

Many French shopping centres to no longer require health pass. Shopping centres with a surface area of more than 20,000 square metres for which a health pass is mandatory will drop from 178 to 64, French Economy Minister Bruno Le Maire announced on BFM TV. Read more.

Doubts remain over Belgium’s plan to close nuclear power plants by 2025. Belgium has committed to closing down its seven nuclear reactors by 2025 and has enshrined that decision in law. But while it is still technically feasible that the closure of the power plants will go ahead as planned, familiar obstacles such as cost and political ideologies may prevent it from happening. EURACTIV’s partner The Bulletin has more.

Austrian facial recognition database collects over 600,000 entries in a year. A database set up by a 2020 law that allows for the use of facial recognition software to identify potential criminals has already collected 638,693 entries, a parliamentary inquiry by the liberal NEOS unveiled on Monday has found. Read more.

Norwegian newspaper challenges Russian censorship. Norwegian online newspaper Barents Observer has launched its own channel on the Telegram messaging app popular among Russians, in a bid to retain its readership there. Read more.

G20 health ministers sign ‘Rome Pact’ for vaccine distribution worldwide. G20 health ministers meeting in Rome have unanimously signed the ‘Rome Pact’, committing to increase the support of poor nations and send them more COVID-19 vaccines in order to meet a 40% vaccination target for the global population by 2021. Read more.

Spain’s Popular Party to win if elections held today, fresh polls predict. If new elections were held today, Spain’s Socialist Party (PSOE) would fall below the mark of 100 seats in the parliament, likely leaving the executive in the hands of the centre-right Popular Party (PP), according to a fresh poll published on Monday by El Mundo. Read the full story.

Portugal: Over 85% of people have had COVID-19 vaccine dose. More than 85% of Portugal’s population has received at least one dose of a COVID-19 vaccine, the country’s director-general of health has announced, adding that three response scenarios have been sketched out, depending on how the pandemic develops in the coming months.

“Today is an important day for all of us,” Graça Freitas said in an interview on the SIC Notícias television channel on Sunday. “Eighty-five percent of the Portuguese population has a dose of the vaccine and this is a result of which we should all, as a people, be very proud.” The task force for COVID-19 Monday called on all migrants who have not yet been vaccinated to do so, regardless of their residence status in Portugal.  (Pedro Caetano, Helena Neves Marques, Lusa.pt)

Greece offers booster dose as thousands of health workers suspended. As from 14 September, Greek citizens will be able to receive a third dose of the COVID-19 vaccine, health authorities announced on Monday. Meanwhile, the government has decided to impose heavy fines after a scandal of thousands of fake vaccination certificates was unveiled. Read more.

Cyprus turns into second home to many Lebanese. Just as during the 1975-1990 civil war that ravaged their country, hundreds of Lebanese families are turning to neighbouring Cyprus to escape the miseries of everyday life back home. Read more.

In other news, the Polish parliament authorised Monday the introduction of the state of emergency along the Belarusian border. (Piotr Maciej Kaczyński | EURACTIV.pl)

The bid also named as subcontractors Híd-Tám Kft, the company of Lőrinc Mészáros’ brother János Mészáros, and V-Híd Vagyonkezelő, also a Mészáros interest. The only other bidder would have undertaken the work for more, €992 million. Since Orbán came to power in 2010, Mészáros has grown to accumulate wealth to become Hungary’s richest individual with a net worth of around €1.3 billion in large part thanks to government contracts. (Vlagyiszlav Makszimov | EURACTIV.com with Telex)

In other news, soldiers will once again assist employees of health institutions in logistical tasks, Hungary’s defence ministry said in a statement. The soldiers will be assisting the work of health workers with about 83 people in 23 hospitals across the country, the ministry said in a statement. In the spring, around 1,100 soldiers were deployed in 93 health institutions. They were involved in logistical tasks, assisting in taking the temperature of arriving patients, patient management, escorting and guiding patients, as well as administrative and transport tasks, all of which helped reduce the workload of health workers.

Analysts suggest the measure could also signal that the government expects a fourth pandemic wave. Last week, Cecília Müller, the national chief medical officer, said a fourth wave could not be avoided and added that the delta variant has already become dominant in Hungary, accounting for more than 90% of new cases. (Vlagyiszlav Makszimov | EURACTIV.com with Telex)

Activists, investors clash over construction of LNG terminal in Slovakia. As activists from Greenpeace Slovakia and other organisations protested the construction of a new LNG (liquified natural gas) terminal in Bratislava over the weekend, with investors arguing that the terminal would reduce greenhouse gas emissions and help make the shipping industry more environmentally friendly. Read more.

Croatia has an infertility problem. “Infertility is constantly rising, globally and in Croatia. It is estimated that in 10 years about 30% of couples in most of the world will be infertile,” Večernji List daily quoted gynaecologist Velimir Šimunić, a human reproduction subspecialist and in vitro fertilisation (IVF) pioneer at a Zagreb women’s hospital, as saying. Read more.

Court orders Slovenia government to fund under-fire news agency. Slovenia’s Supreme Court ruled Monday that the conservative government must resume financing of the country’s only news agency STA, which it halted during a row over its management and reporting. Read more.

Man accused of sending death threats to parliament chair under house arrest. A court has placed 26-year-old Lyubomir Yakov under house arrest on Monday after he was arrested by police on suspicion of threatening to assassinate Bulgarian National Assembly President Iva Miteva. Read more.

Serbia to continue cooperation with German development bank on energy. Serbian Energy Minister Zorana Mihajlović met with representatives of the German KfW development bank Monday to discuss the continued cooperation in the energy sector, where the total value of completed, ongoing or planned common projects was almost €1.5 billion. Read more.