Czech PM to be taken to court again, this time by his son 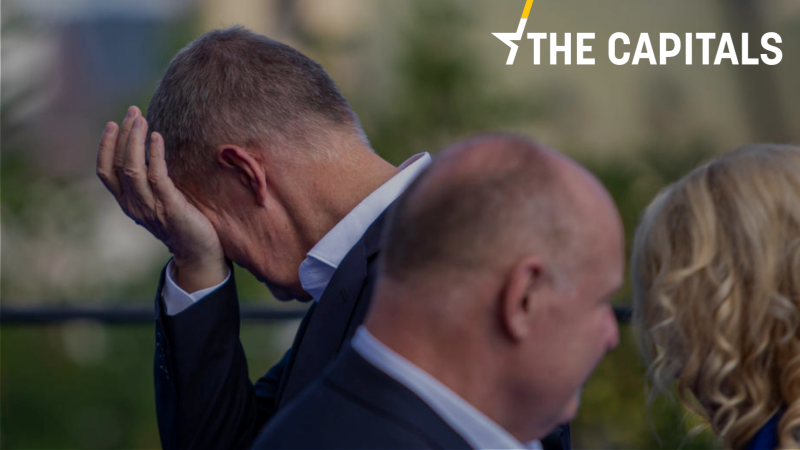 The Czech police interrogated Babiš junior for five hours on Thursday. He provided them with an expert opinion suggesting he has no mental health issues. [EPA-EFE/MARTIN DIVISEK]

Andrej Babiš junior – son of the Czech Prime Minister Andrej Babiš – says he is “determined to file a criminal complaint” against his father. “Crimes have been committed against me. My father should be liable for what he dared to do to me,” Babiš junior told newspaper Deník N. Read more.

Slovenia: Future of Europe debate should focus on resilience. After the successive crises over two decades, a core issue for the Conference on the Future of Europe should be how to ensure the resilience of the EU and put policies in favour of European citizens first, Slovenia’s State Secretary Gašper Dovžan told EURACTIV.

Presidential candidate Barnier wants to limit role of European courts. France should regain its “legal sovereignty” so as to “no longer be subject to the rulings of the CJEU or the ECHR,” former Brexit negotiator Michel Barnier said, referring to two top courts in the EU, at a debate with right-wing parties for the party primaries in the city of Nîmes to mark the start of the new parliamentary year. Read more.

In other news, France will make contraception free for women aged 25 and below, Health Minister Olivier Véran told broadcaster France 2 on Thursday. “It is unbearable that women cannot protect themselves and have contraception if they choose to do so because it is too expensive,” he added.

“This is a very important measure that I want to welcome. The financial argument cannot be an obstacle to the right of women to control their own bodies. The COVID-19 pandemic has already severely restricted access to sexual and reproductive health care,” MEP Chrysoula Zacharopoulou (Renew Europe) told EURACTIV France.

“In the European Parliament, we fought against the conservatives to have sexual and reproductive rights included in EU4Health, the new EU health programme with over €5 billion. It is now a done deal,” she added. (Clara Bauer-Babef | EURACTIV.fr)

Kurz backs conservative Laschet in German chancellorship bid. Austrian Chancellor Sebastian Kurz said at the European People’s Party (EPP) congress in Berlin Thursday that he fully supports the candidacy of Armin Laschet as Germany’s future chancellor and as a “force for the political centre”. Read more.

Finnish government survives internal row over emissions slashing plan. A compromise was finally reached Thursday after the Greens and the Centre Party – who are part of the five-party government and have a strong affiliation to the agriculture sector – could not agree on how to finance the country’s path towards carbon neutrality in time for 2035, which put the government at the brink of yet another crisis. Read more.

Italy to make COVID pass compulsory for schools. The Italian government has made showing the COVID-19 ‘green pass’ mandatory for all those who enter school or university grounds, with the exception of underage students, according to a decree approved on Thursday by the council of ministers. Read more.

In Spain, prosecutors mull charging man who falsely claimed to be victim of hate crime. Prosecutors in Spain on Thursday were considering charging a man who claimed to be the victim of a homophobic attack before admitting that the injuries he sustained in the incident were consensual. Read more.

Direct effects of COVID-19 cost Portugal more than €4.1 billion until July. The direct effects of the pandemic on public accounts amounted to €4.133 billion by the end of July, according to the Technical Unit for Budgetary Support (UTAO). Read more.

In other news, Portugal’s Communist-backed CGTP union confederation will demand a wage increase of €90 for all workers for 2022 and the setting of the national minimum wage at €850, according to the income policy proposal approved on Thursday.

The confederation’s National Council approved this draft income policy for 2022, which will serve as a guideline for CGTP unions in collective bargaining. The document defines all the demands that the CGTP and its trade unions will fight for, namely the appreciation of wages and careers, the fight against precariousness, respect for labour rights, and reduced working hours. In the list of demands approved a year ago, the CGTP also called for wage increases of €90 for all workers and a minimum wage of €850 by 2021. (Rosária Rato, Lusa.pt)

Poland’s ruling PiS sends mixed signals on ‘Polexit’. Ryszard Terlecki, a leading Law and Justice (PiS) figure, who is at the same time the chief party whip and a deputy speaker of the Polish parliament, created an unexpected crisis when he told a conference in Karpacz that the EU “should be what is acceptable to us” and that “if it goes as it is likely to go, we must look for drastic solutions. The British showed us that the dictatorship of the Brussels bureaucracy did not suit them and they turned around and left”.

Following public outcry, he clarified his position on Twitter on Thursday, saying “Poland was, is and will be a member of the EU. ‘Polexit’ is a hoax invented by the Civic Platform and the TVN24 [US-owned TV channel critical of the government]”. Read more.

Hacker attacks block Bulgarian census. Continuous hacker attacks have managed to block the online population census in Bulgaria, which began on Tuesday. On the third day, the system was down due to another large-scale denial-of-service (DoS) attack. Read more.

Tourism to continue in Croatia as country turns red on ECDC map. Tourists returning to their countries do not have to self-isolate but will have to present a negative PCR or rapid antigen test result if they are not vaccinated, the tourism and sports ministry said in a press release after the whole country turned red on the updated COVID-19 transmission map produced by the European Centre for Disease Prevention and Control (ECDC). Read more.

Construction on Chinese Sinopharm factory starts in Belgrade. The construction of a factory for the production of vaccines of Chinese company Sinopharm began in the Belgrade municipality of Zemun on Thursday, as a joint investment of Serbia, China and the United Arab Emirates, worth €30 million. Read more.

The 12 survivors who were saved by emergency services are now being treated in the Clinical Hospital in Tetovo. Their lives are not endangered. The explosion occurred around 9 pm on Wednesday and the resulting fire soon engulfed an entire modular ward set up for patients with COVID-19. About thirty firefighters put out the fire for about half an hour, Mia reported. (Željko Trkanjec | EURACTIV.hr)

Mayoral candidate killed. Mayoral candidate Astrit Ademaj of the Democratic Party of Kosovo (PDK) – the biggest opposition party in parliament – was killed Wednesday evening in his hometown of Pejać. Another PDK member was also killed, while the brother of one of the victims was wounded in the incident. Mayoral elections are scheduled for 17 October. (Željko Trkanjec | EURACTIV.hr)