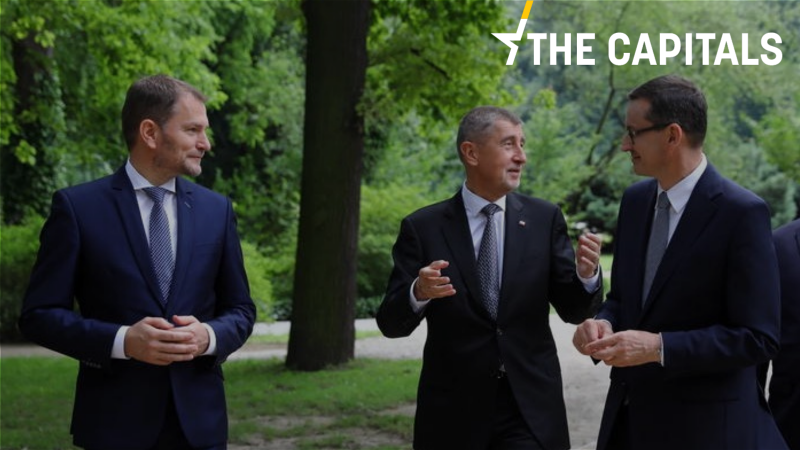 Before you start reading today’s edition of the Capitals, feel free to have a look at the article “US lambasts Russian vaccine ‘disinformation’, more doses arrive under the Covax initiative“.

Facebook partnerships to fight against COVID-19:  Working together is more important than ever in the fight against COVID-19. In Spain, the World Bank is using Facebook’s Disease Prevention Maps to forecast needs for COVID-19 testing and hospital beds. Learn more about how we’re collaborating to keep communities safe and informed at about.fb.com/europe.

Although the four Visegrad countries pledged to contribute a collective €3 million (€750 million each) to accelerate the development of COVID-19 vaccines at a global conference organised by the European Commission and the World Health Organisation in May 2020, the WTO’s donation tracker does not feature Czechia, Poland, or Slovakia but includes Hungary with a contribution worth $1 million. Read more.

US Republicans warn Biden of backdoor deal with Germany. Leading Republicans on the US House of Representatives Foreign Affairs Committee have warned President Joe Biden in a letter against “deal through the back door” with Germany on Nord Stream 2. They are also calling for further sanctions against companies involved in the Baltic Sea pipeline project. Read the full story.

Fidesz’s EPP exit confirms group’s ‘existential crisis’, says Renew MEP. Members of the European People’s Party (EPP) did not manage to kick Hungary’s Fidesz out of the group for ten years “despite repeated violations of the rule of law,” Renew Europe MEP Stéphane Séjourné wrote in a letter to the group’s chair Dacian Cioloș, seen by EURACTIV France. He added that “they would not have been in a position to do so if Fidesz itself had not pulled out the plug. This confirms their existential crisis.” Read more about ‘trouble brewing’ within Macron’s Renew group. (Mathieu Pollet | EURACTIV.fr)

EU ‘surprised’ at Belgium extending virus travel ban. The European Commission said on Monday it was “surprised” that Belgium has extended a blanket travel ban to fight COVID-19, despite warning against limits on Europeans’ freedom of movement. Read more.

Brussels to rename tram, bus stops after famous women. Brussels’ public transport operator marked International Women’s Day on Monday (8 March) by renaming 10 metro stations after famous women for one day, and pledging to permanently rename 17 bus and tram stops over the next three years to “feminise” its network. More

Vienna’s anti-lockdown protests cause political turbulence. After more than 20,000 people – including far-right FPÖ members and members of neo-Nazi groups – demonstrated against coronavirus measures in Vienna on Sunday, the conservative ÖVP demanded the resignation of FPÖ parliamentary leader Herbert Kickl. Kickl held a speech at the protest and he and his party were also mostly blamed for allowing things to escalate during the demonstration. (Philipp Grüll | EURACTIV.de)

Mandatory quarantining for Irish arrivals has been signed into law. Irish President Micheal D Higgins signed the Health Act 2021 into law on Sunday, stating that travellers from 20 high-risk COVID-19 countries would have to quarantine in a designated hotel for 14 days when arriving in the State of Ireland. Read more.

Chief of Spanish businesses warns against relaxing EU fiscal rules. Softening fiscal rules to mitigate the effects COVID-19 has had on the Spanish business sector may mean “facing a €70 billion hole in 2023”, Antonio Garamendi, head of the Spanish Confederation of Business Organisations (CEOE), warned in an exclusive online interview published with Cinco Días. Read more.

‘End of the tunnel’ for Italy, as vaccinations surge, says Draghi. “With an acceleration of the vaccination plan, we can see the end of the tunnel,” Italian Prime Minister Mario Draghi said in a message of hope at a gender equality conference on International Women’s Day Monday.

As the coronavirus-related death count surpassed 100,000 on Monday, Draghi – who said he would not promise anything that was unachievable – has confirmed that the country’s vaccination plan will be scaled up in the next few days, prioritising people at risk. The new PM also spoke of the country’s national recovery plan, noting that gender equality will be among the criteria used to evaluate projects featured in the plan. (Alessandro Follis | EURACTIV.it)

Greece, Cyprus, Israel sign deal to build undersea cable. Greece, Cyprus, and Israel have signed a trilateral Memorandum of Understanding for the construction of an underwater power cable that will run through the Mediterranean seabed and act as an emergency back-up power source. The cost of the power cable has been estimated at €759 million and will be partly funded by the EU. Read more.

Hungarian FM: Brussels wants to make drug use easier. “Unfortunately, what we are seeing is that Brussels not only supports illegal migration but also the increase in drug use, or at least it wants to make it easier since cannabis has recently been reclassified at the UN as a category that is allegedly not dangerous,” Hungarian foreign minister Péter Szijjártó has said, EURACTIV’s partner Telex has reported via state news agency MTI. Read more.

Women’s Day in Poland marked with demonstrations. Following the recent restriction of women’s rights in Poland, including the near-total ban on abortion that took effect in January, this year’s Women’s Day was marked with protests and demonstrations across the entire country. The protests focused not only on the abortion law but also on greater state support for in vitro procedures and sexual education. Read more.

Bulgarian election scandals have reached European Parliament. The Bulgarian Socialist Party has informed the European Parliament and the Council of Europe on Prime Minister Boyko Borissov’s recent election campaign, which has seen him travelling throughout the country and promoting his government’s success while speaking openly against the opposition. The country’s parliamentary elections are scheduled for 4 April. Read more.

Iohannis signs budget into law. President Klaus Iohannis gave his ok on the budget laws on Monday, which means Romania finally has a budget for the current year, more than two months after its start. The budget is made to finance investment and encourage the take-up of EU funds, thus leading to development in essential sectors that were disregarded in the past, the presidency has said. (Bogdan Neagu | EURACTIV.ro)

Hard to expect measures to relax from 15 March, says Croatian interior minister. It will be difficult to expect any further relaxation of measures after 15 March considering that numbers of new coronavirus cases are on the rise, Interior Minister and head of the national COVID-19 response team, Davor Božinović, has said. Read more.

Slovenia’s COVID-19 situation not improving. “The epidemiological situation is unfortunately not improving as we would wish, hence we cannot expect restrictions to be relaxed,” infectious diseases doctor Mareja Logar told a press conference on Monday, confirming that one family has contracted the Brazil variant of the virus. Read more.

Serbia hires Cherie Blair’s legal firm for dispute with United Group media company. The Serbian government has hired the legal firm of Cherie Blair, wife of former British Prime Minister Tony Blair, after the Dutch-owned United Group BV media company accused the “autocratic regime” in Belgrade of putting pressure on its Serbian-based company SBB in an attempt by the ruling party to increase its power, according to The Telegraph newspaper. Read more.

In other news, Serbia’s aspirations to join the EU are delayed due to a lack of political will, Vice-President of the European Movement in Serbia Vladimir Međak, declared at a presentation on Monday. He said Serbia’s European integration had begun to slow down due to the unwillingness to begin changes that are “not popular and which will essentially change Serbia and direct it toward the EU.” Read more.