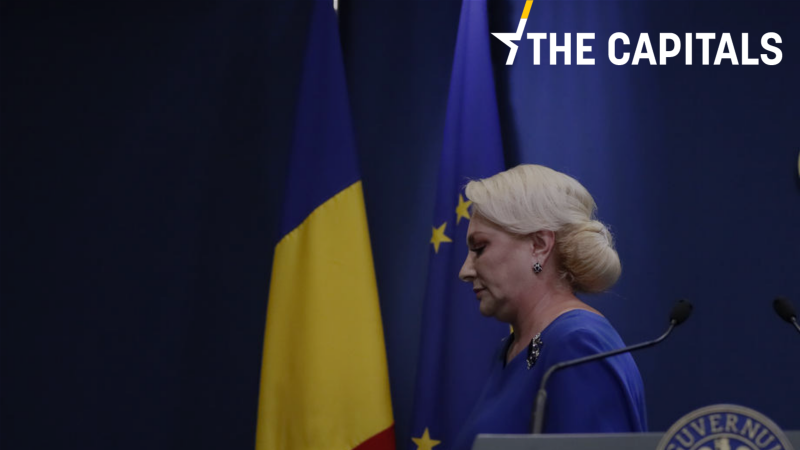 The Capitals brings you the latest news from across Europe. [EPA/Robert Ghement]

Romanian PM reacts to EURACTIV report. Romanian Prime Minister Viorica Dăncilă has reacted to The Capitals published on Wednesday (4 September), which suggested that the two names – Dan Nica and Rovana Plumb – put forward by the Romanian government for the next European Commission have been rejected.

Instead, the ‘Romanian lobby’ in Brussels is pushing for former MEP and current government minister Ramona Mănescu, EURACTIV reported.

“There is nothing official. I saw the desire of some to have the Commissioners rejected because the political advantages are more important than the image of Romania,” Dăncilă said.

She added: “When I was an MEP and no matter who was nominated for European Commissioner, even Mr Cioloș [currently President of Renew Europe group in the EU House] when he became Commissioner for Agriculture, I was a member of the Committee on Agriculture in the European Parliament and I supported his candidacy because he was the representative of Romania. I would like to see the same approach and the same responsibility from all.”

However, our sources insist that Mănescu’s candidacy is still prioritised and it is highly possible that Bucharest will receive the transport portfolio.

Winemakers for CETA. The French Federation of Wine and Spirits Exporters (FEVS) publicly welcomed on Thursday the “real benefit” of the EU-Canada trade  (CETA) deal, hoping that the French Parliament will “definitively validate this agreement so that it can be quickly ratified”.

The agreement has been attacked by European agricultural sectors such as livestock in France and Ireland. CETA, which entered into force on 21 September 2017, eliminated customs duties on 98% of products traded between the two zones.

French wines and spirits exports to Canada increased by 4% in volume and 6% in value between October 2017 and June 2019, according to FEVS. “We are exporting more than 5 million additional bottles and achieving an additional turnover of around €40 million”, said FEVS President Antoine Leccia. (EURACTIV.fr)

Spain to keep lead in EU economic growth table. Acting Minister of Economy Nadia Calviño on Tuesday said Spain would continue to lead “the economic growth of the EU”. She said the Iberian country is expected to grow around 2% in 2020, in line with the acting government’s forecast of 1.9%, EURACTIV’s partner EFE has reported.

In a seminar held on Thursday at EFE premises in Madrid (“Efeminist Breakfasts”), Calviño said all key international financial bodies forecast a growth of the Spanish economy for this year between 2.2% and 2.4%, above the government 2.2% forecast, a figure that the socialist minister has described as “extremely prudent.”(EuroEFE.EURACTIV.es)

To tax or not to tax? During his visit to Poland, American Vice-President Mike Pence thanked Warsaw for having decided not to impose a digital tax, which could include tech giants, such as Apple, but it remains unclear whether Poland has completely withdrawn from this idea. The ministry of finance is said to be continuing its work on the proposal. Following Pence’s visit, Polish Prime Minister Morawiecki said: “We plan to introduce such a tax according to the rules of the EU and OECD”.  (Łukasz Gadzała, EURACTIV.pl)

Refugees under attack. The police have reported 609 attacks on refugees in the first half of 2019, according to German daily Neue Osnabrücker Zeitung. This was a response from the Federal Government following a request by the left-wing groups in the Bundestag. The offences ranged from insults and incitement to arson and dangerous assault.

Almost all crimes were classified by the authorities as “politically motivated crime from the right”. In addition, there were 60 attacks on refugee shelters and 42 attacks on aid organisations or volunteers. The attacks injured 102 people, including seven children. (Claire Stam,EURACTIV.de)

Cold war in a warm place. A 57-year-old Russian national, Aleksandr Korshunov, was arrested on charges of industrial espionage in Naples, upon request from the United States. Korshunov, who is a senior manager in the Russian state company Odk, is suspected of having taken documents protected by intellectual property rights from the US company General Electric. President Vladimir Putin commented: “We clearly have attempts of unfair competition here.”

A count for Conte. Italy has named Paolo Gentiloni as Commissioner. A descendant of an aristocratic family, Gentiloni was former Minister for Foreign Affairs and ex-Premier. He is expected to get a big portfolio. “I love Italy and Europe and I am proud of this appointment,” Gentiloni tweeted. (Gerardo Fortuna, EURACTIV.com)

EU Commission politics intensifies Greek row over competition post. Party politicking in the run-up to the appointment of the next European Commission has escalated an already intense debate in Greece over a new law under which members of an independent competition authority have been sacked.

For Stelios Kouloglou, a Syriza MEP, Competition Commissioner Vestager is facing difficulties in taking a clear position on the new law passed by the New Democracy government, now, considering that she is in line for a senior vice-presidency position in Ursula von der Leyen’s new EU administration, in which the EPP, to which ruling New Democracy belongs, will have the most representatives.

However, Giorgos Kyrtsos, a New Democracy MEP, told EURACTIV that Vasiliki Thanou, former competition chief who was sacked, was not fit to lead an independent body, as she was part of former PM Alexis Tsipras’s team. (Sarantis Michalopoulos/EURACTIV.com)

Fico said he respects the court ́s decision but considers it to be a “media ruling”, made under the pressure of liberal media and NGOs. “If you punish someone for the truth, you make him a national hero,” he added in a video called “Anti-fascist orientation of the Smer-SD party”.(Zuzana Gabrižová, EURACTIV.sk)

Czechs trust the EU a little more. Czechs’ trust in the EU and the European Parliament has been slightly increasing since 2016, when it was at a record low, according to a poll conducted by the STEM polling institute in June and released yesterday. Compared to last year, public trust in the EU rose by 2% to 41% and in the European Parliament by 4% to 34%. Still, the Czech Republic is one of the most eurosceptic countries in the EU. (Ondřej Plevák, EURACTIV.cz)

Conflicts of interests. The Conflict of Interest Commission on Thursday launched a case against Prime Minister Andrej Plenković and Minister of Interior Davor Božinović. The commission argues that they violated principles of good governance and repeatedly refused to provide documentation related to their trip to the European People’s Party Congress in Helsinki last year. (Željko Trkanjec, EURACTIV.hr)

President condemns all forms of violence. Croatian President Kolinda Grabar-Kitarović has condemned sexual, domestic and any other form of violence after Damir Škaro, former HDZ (EPP) MP and bronze medalist at the Seoul Olympics in boxing, was arrested on suspicion of rape. The President (elected as HDZ candidate) encourages all women to report any form of violence and expects prompt and effective action by the relevant institutions. The President reacted after the women’s forum of the opposition Social Democratic Party (SDP-S&D) called on her to distance herself from Škaro. (Željko Trkanjec, EURACTIV.hr)

Bulgaria loses major investment. Bulgaria is set to lose to Turkey in the race to host a major Volkswagen factory, the daily Dnevnik writes. Reportedly, a meeting of Volkswagen’s CEO with Turkish President Recep Tayyip Erdogan has cleared all remaining hurdles. Agencies reported last week that Volkswagen was holding talks with officials in Ankara over Turkey’s vehicle tax regime as it seeks to conclude a €1 billion agreement to build a production plant in Turkey. The company said earlier that no final decision had been reached on the location of a new multi-brand plant. The auto maker had also been looking at Bulgaria. (Georgi Gotev, EURACTIV.com)