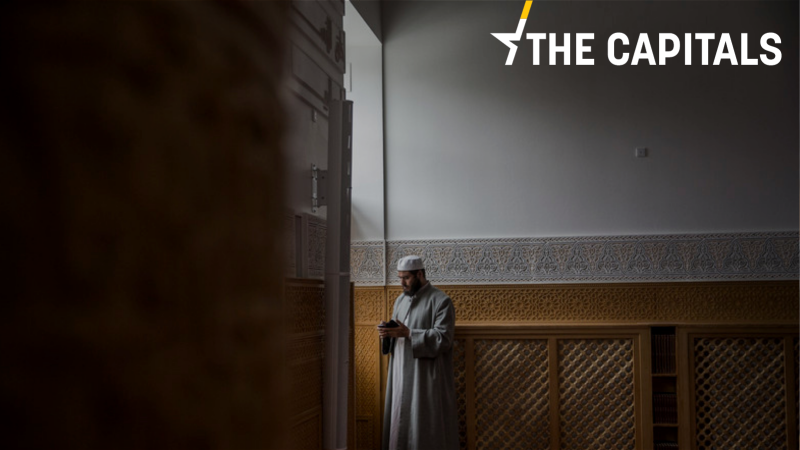 Before you start reading today’s edition of the Capitals, feel free to have a look at the article Bring Western Balkans back on the agenda, urge nine EU member states, by Alexandra Brzozowski and Vlagyiszlav Makszimov.

**NOTE: We are currently looking for two journalists to enforce our growing team in Berlin. Apply here.

A message from FACEBOOK: Facebook partnerships to fight against COVID-19:  Working together is more important than ever in the fight against COVID-19. In Spain, the World Bank is using Facebook’s Disease Prevention Maps to forecast needs for COVID-19 testing and hospital beds. Learn more about how we’re collaborating to keep communities safe and informed at about.fb.com/europe.

Denmark wants to ban donations from potentially extremist individuals, organisations and authorities that might turn the country’s Muslim citizens against society and erode human rights and basic freedoms. Read more.

German regional polls key stress test for Merkel successor. In Germany’s two state elections in Baden-Württemberg and Rhineland-Palatinate on Sunday, the scandal over the purchase of face masks is threatening to become the undoing of the Christian Democrats. Read more.

France to relax travel restrictions for seven non-EU countries. In a decree to be published on Thursday, French Foreign Affairs Jean-Yves Le Drian will abolish the “compelling reason” condition for travel to or from Australia, South Korea, Israel, Japan, New Zealand, the UK and Singapore because of “the very wide distribution of the British variant in France and the specific health situation in these countries”.

For other countries, a negative PCR test no older than 72 hours old is still required. The government has nevertheless announced that the list of compelling reasons will be extended “to include all family relationships.” and that students taking competitive examinations will also be able to travel freely.

In other news, Prime Minister Jean Castex announced new measures to support the cultural sector. €20 million will be added to the €30 million already earmarked for the recovery plan 2021, will be released to “intensify support for artistic and cultural employment in order to preserve the cultural fabric throughout France and encourage the rapid recovery of the cultural offer when the time comes”. (Mathieu Pollet | EURACTIV.fr)

Belgian youth to receive the vaccine after summer? Children and young people who wish to do so will be vaccinated after summer, Belgium’s Prime Minister Alexander De Croo (Open VLD) said on Thursday. Read more.

Austrian government sticks to AstraZeneca. After Denmark and Norway had decided to stop using the AstraZeneca-vaccine following medical complications in some cases, other European capitals had been discussing whether to follow suit. Austria now announced that they will keep administering the Swedish-British vaccine.

“The utility of the approved and available Corona-vaccines has been clearly shown. The continuation of the vaccination-campaign is important and saves lives daily”, said a spokesperson from the ministry of health. (Philipp Grüell, EURACTIV.de)

Court denies bid to extend settlement scheme for EU nationals. The UK high court has rejected a legal bid for an extension to the EU settlement scheme (EUSS) on the grounds that the application process must have a deadline. Read more.

New needs-based COVID vaccine distribution scheme needed, say Baltics. Three Baltic states have written to the European Commission asking for a new system of COVID-19 vaccine distributions based on need, which they say will improve the efficiency of the EU’s vaccination programme. Read the full story.

Labour Minister says lay-off ban will continue beyond March. The ban on layoffs – imposed last year to mitigate the economic damage caused by the COVID-19 pandemic – will continue beyond the originally scheduled cut off date of 31 March, Labour Minister Andrea Orlando said in a Senate hearing on Thursday. For larger companies, the ban will probably last until 30 June, while for small and medium-sized companies the term will be longer.

Meanwhile, according to a report released on Thursday by the entrepreneurial association Unimpresa, the Italians have deposited close to €2 trillion in banks, which is more than the country’s GDP. The increase in saving is a product of the collapse in consumption during the pandemic, the contraction of markets and people saving more due to the unpredictable economic situatation.

This figure, according to Italian observers, risks widening social inequalities. According to recent data from the National Statistical Institute, Italy registered an extra million people living in poverty in 2020. (Daniele Lettig | EURACTIV.it)

Romania to start Phase 3 of its vaccination campaign. Romania will enter phase three of its vaccination schedule earlier than anticipated, due to receiving more vaccines than initially predicted, allowing all adults to receive a vaccination appointment from Monday, Prime Minister Florin Citu has confirmed. Read more.

In other news, Romanian citizens have received vaccines from the ABV2856 batch of the AstraZeneca vaccine, which was banned by several European countries after the death of two men vaccinated in Sicily with shots from the batch, local media reported.

While Prime Minister Florin Citu confirmed that a decision on whether to continue administering the vaccine will be taken shortly, vaccination campaign coordinator Valeriu Gheorghita said that although additional data is needed, Romania will stop using the AstraZeneca vaccine if EU health authorities decide to suspend it. (Bogdan Neagu | EURACTIV.ro)

Slovenia to get 100,000 doses of AstraZeneca vaccine, fewer than planned. A new shipment of the AstraZeneca vaccine arrived in Slovenia on Thursday, containing 14,400 shots, the National Institute of Public Health (NIJZ) told Slovenian Press Agency STA. However, a delivery planned in the next couple of weeks will leave Slovenia 100,000 doses short of the initially planned supply, the NIJZ added. Read more.

EU gives Serbia €12 million to fight COVID-19. The European Commission has proposed to unlock close to €12 million from the European Solidarity Fund to help Serbia in its fight against the COVID-19 pandemic, the EU delegation in Serbia announced on Thursday. Read more.

In other news, Serbian Interior Minister and leader of the Movement of Socialists Aleksandar Vulin said on Thursday that the former Serbian and Federal Republic of Yugoslavia President Slobodan Milošević, accused of having committed alleged war crimes, “deserves the respect of Serbia and Serbs but also of everyone who respects freedom fighters.” Read more.

Montenegro aims to save its summer tourism. Montenegro’s businesspeople and authorities have pledged to intensify cooperation in a bid to try and save the main summer season, an online meeting of representatives of the country’s largest business associations has concluded, daily Dan reported. Read more.

Albanian PM promises four airports, two ports and mass vaccination. Prime Minister Edi Rama has promised to roll out vaccination ‘en masse’ this year, and complete the construction of four airports in Tirana, Kukes, Vlora and Saranda and two ports if his Socialist Party wins the 25 April elections for a third term, exit.al reported. “Albania will also be the destination of elite tourism for luxury yachts,” Rama promised.

Meanwhile, the US Ambassador to Tirana, Yuri Kim, has put fresh pressure on Albanian parties to vet their lists of candidates submitted to the central election commission ahead of the elections, suggesting some should be disqualified on corruption charges, BalkanInsight reported. (Željko Trkanjec | EURACTIV.hr)