Diplomatic intrigue at FAO casts doubt on Italy’s loyalty to EU, US 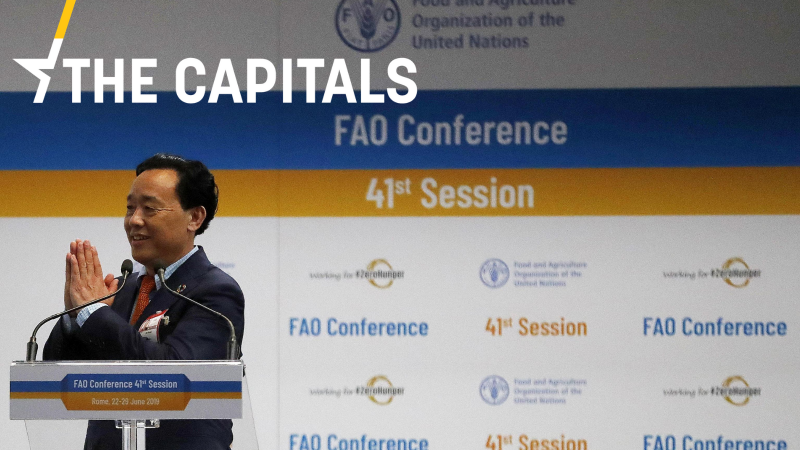 The Capitals is EURACTIV's daily newsletter from across Europe. [EPA/Riccardo Antimiani]

The day after China’s Qu Dongyu was elected as the new director-general of the UN’s Food and Agriculture Organisation (FAO), rumours suggest that Italy was up to something fishy.

Rome had promised its EU partners that its vote would go to France’s Catherine Geslain-Lanéelle while it made the same pledge to the Trump administration about the US’ horse in the race, Georgia’s Davit Kirvalidze. But in the end, the vote looks to have gone to Qu Dongyu.

Under pressure from the opposition, the government released a note yesterday afternoon insisting that Italy’s delegation voted in favour of the EU candidate. The note added that it was confirmed in person by Italian PM Giuseppe Conte to Emmanuel Macron.

However, the numbers just do not add up, according to diplomatic sources, who said one or two EU countries seem to be missing in the count. Yet, when Geslain-Lanéelle was designated as the sole EU candidate for the top UN job, a diplomat said that “a high number”, not all EU member states, had informally backed her bid.

The US expected around 40 votes for Kirvalidze in the first round according to La Stampa, meaning that almost 30 FAO members turned their back on Georgia’s candidate.

Last week, Salvini said “Italy wants to become again the first partner in Europe” of the US, but Rome has recently started shifting towards the Chinese bloc by becoming the first G7 country to back China’s Belt and Road Initiative. (Gerardo Fortuna, EURACTIV.com)

Stalemate continues. A month after the federal elections, only the German-speaking government has been formed while in Wallonia, Brussels and Flanders a majority remains elusive. Although the numbers to form a government are there, the stalemate is due to the fragmented political landscape: a big divide between weakened traditional parties and strengthened parties on the right, as well as political forces that refuse to work with each other. (Alexandra Brzozowski, EURACTIV.com)

“Much though I understand why people want to reduce that eruption in British politics to some kind of plot or conspiracy of some use of new social media through opaque means, I’m afraid the roots to British Euroscepticism go very deep,” Clegg said on BBC Radio 4.

“Candidly, over the last 40 years, they have been much more influenced by traditional media than they have by the new media.” (Samuel Stolton, EURACTIV.com)

But she made it clear that her offer would not be valid if the French leader continued to oppose the Bavarian candidate for the presidency of the European Commission, Manfred Weber.

“Without the Spitzenkandidats, transnational lists make no sense,” she said.  She added that the centre-right EPP continues to back Weber and called on the Social Democrats and Liberals to reconsider their opposition to the conservative candidate.

“The principle of the Spitzenkandidat is a step towards a more democratic Europe.” Before the EU elections, Berlin had rejected the idea of transnational lists pushed forward by Paris. (Claire Stam, EURACTIV.de)

Heatwave in France. French National Education Minister Jean-Michel Blanquer was forced to postpone the national high-school exam due to the heatwave. “We need to guarantee the safety of the students,” Blanquer said. The new date for the exams is 1-2 July. (EURACTIV.fr)

Medvedev in France. French PM Edouard Philippe yesterday held talks with Russia counterpart Dmitry Medvedev, in a rare high-level visit at a time of frosty ties between Moscow and the West. The French premier said he wanted to “open a new space for political dialogue with Russia”. Read more here.

Elections without a debate. Greece’s political parties have not managed to find a common date to organise a debate ahead of the 7 July national elections. Initially, one was scheduled for 1 July but due to an extra Council summit on 30 June and its unpredictability, Greek PM  Alexis Tsipras asked for another date. In the end, it was cancelled. (Theodore Karaoulanis, EURACTIV.gr)

The parties started the blame-game. Tsipras said conservative New Democracy leader Kyriakos Mitsotakis was doing everything to avoid a debate. ND has rejected all of Tsipras’ proposals for a debate between the two leaders. (Sarantis Michalopoulos, EURACTIV.com)

Brits and Turkey. UK Defence Secretary Penny Mordaunt visited Cyprus amid mounting tensions over Turkish gas drilling activities in the Cypriot Exclusive Economic Zone. Cypriot media reported that the UK tries to soften the language of potential EU measures against Turkey, based on a non-paper that the Turkish government sent to every EU capital, except Nicosia. (Theodore Karaoulanis, EURACTIV.gr)

Poland vs Court of Justice. The EU Court of Justice said changes to Polish law that lowered the retirement age for Supreme Court judges violated EU rules. The ECJ said the new law undermines the independence of Poland’s judiciary and “is not justified by a legitimate objective”.  (Łukasz Gadzała, EURACTIV.pl)

Dual food quality exists, but geographic discrimination does not. The Joint Research Center of the EU (JRC) analysed nearly 128 food products in 19 EU countries and found that almost one-third of products on the European market is identically or similarly labeled but has a different composition. Analysts, however, have not found a consistent geographic pattern.

“The new member states are not systematically discriminated against, as it was widely interpreted,” JRC Director Vladimír Šucha said.

Food manufacturers hailed the report: “We hope that the publication of the JRC report will provide reassurance to consumers, authorities and other stakeholders,” said Mella Frewen, Director General of FoodDrinkEurope.

The Slovak ministry of agriculture said Austria, Germany and Italy were not involved in the testing, even though they import many products of dual quality into Slovakia or the Czech Republic.

Dual quality of products in the EU raised eyebrows in Brussels and topped the agenda of V4 politicians, who have insisted that lower quality products are being sent to the new EU member states, whereas older members receive products of higher quality. (Read more here)

Next EC chief should not talk too much. “It is important that the Spitzenkandidats, some of whom dislike the Visegrad Four or our territory, did not succeed,” the Czech News Agency (CTK) quoted PM Andrej Babiš as saying. “It is vital for the Czech Republic and the V4 that the next president of the European Commission should not intervene in and comment on politics. Instead, the person should mainly implement the conclusions of the European Council,” Babiš added. (Aneta Zachová, EURACTIV.cz)

Venice Commission slams legislation changes. The Venice Commission, an advisory body of the Council of Europe, called on the Romanian government to “drastically reduce” the use of emergency decrees in all fields of law. Although it analysed in particular the frequent changes made to judiciary legislation, it said “the routine use of emergency powers is objectionable at many levels”, because it affects the quality of the legislation, disturbs legal certainty, weakens external checks on the government and disregards the principle of the separation of powers.

Former MEP set to become ombudsman. Renate Weber could become the new Romanian Ombudsman, at the proposal of ALDE, a junior partner of PSD in the governing coalition. Weber missed the chance to return to the EU Parliament, as ALDE scored less than the 5% minimum threshold in the EU elections in May. However, in a rather surprising decision, the ruling coalition supports Mugur Isarescu, who is already the longest-serving central bank governor in the world, for a new mandate at the helm of Romania’s central bank. In the past, PSD attacked the decisions of Isarescu, criticising him for not doing enough to prop up the local currency and lower the rates. (EURACTIV.ro)

Homeland union to lead opinion polls. According to recent polls, the Lithuanian conservative Homeland Union party (EPP) would win parliamentary elections with 17% of the votes followed by the ruling Farmers and Greens Union (15%), the Lithuanian social democratic party (8%) and the Labour party (7%). The next parliamentary elections are due in October 2020. (Angele Kedaitiene, EUnewsLithuania)

Apartment scandal. Bulgaria’s Anticorruption Committee found no wrongdoing during its investigation into the purchases of luxury apartments at favourable prices by politicians from the country’s ruling majority. Bulgaria’s justice minister and two deputy ministers resigned following reports that they had bought spacious apartments at prices seriously below the market value. Tsvetan Tsvetanov, who was the number two in the ruling party, resigned from all leadership posts in the centre-right GERB (EPP). (Dnevnik.bg)

FM minister in the Council of Europe. Croatia’s foreign affairs chief, Marija Pejčinović-Burić, is very likely to be the next Secretary-General of the CoE, according to EURACTIV’s partner Jutarnji list. If she gets the post, then she will have to be quickly replaced as Zagreb takes over its first EU presidency on 1 January 2020.