Does Draghi stay or go? Italy readies for new president 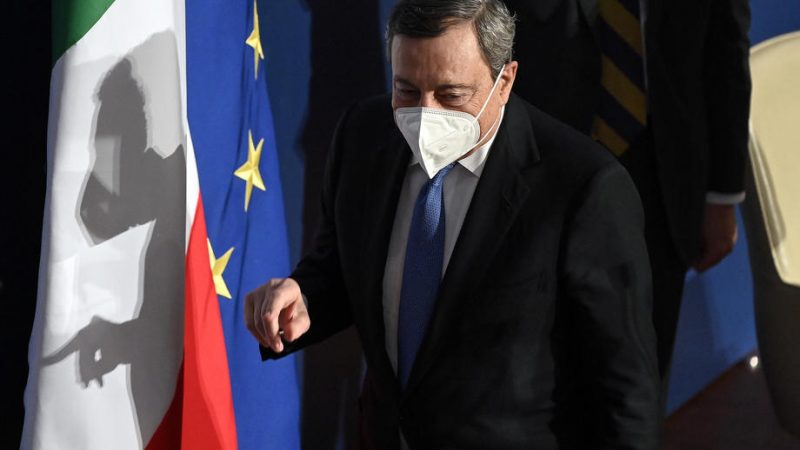 During a one-hour phone call, the PM also reaffirmed the government’s willingness to contribute to the peace process if Russia sends clear signs of de-escalation.  [EPA-EFE/RICCARDO ANTIMIANI]

Italy’s parliament will start voting on January 24 for a new president, with Prime Minister Mario Draghi widely expected to take over despite the risk of destabilising the country’s post-pandemic recovery.

Sergio Mattarella is stepping down on February 3 after completing a seven-year term as president, a largely ceremonial post except in times of political crisis, when he plays a crucial arbitrating role.

It was Mattarella who brought in Draghi, a former European Central Bank chief, to lead a national unity government in February 2021 when the previous coalition collapsed — and he may now step into his benefactor’s shoes.

The new job would last seven years, whereas Draghi’s premiership risks ending with elections scheduled for 2023, allowing him to continue to exert considerable influence.

But the 74-year-old’s move to the Quirinale presidential palace would upset the balance of power in the government just as Italy is emerging from the devastation wrought by the coronavirus pandemic.

Berlusconi has support among centre-right parties, including his Forza Italia, but others are opposed, with the deputy leader of the Democratic Party saying his bid was a “tragic joke”.

The winner is chosen by secret ballot of around 1,000 electors comprising senators, MPs and representatives of Italy’s 20 regions, and must secure at least two-thirds of votes in the first three rounds, or more than half thereafter.

“By default, Draghi is the leading candidate,” said Lorenzo Codogno, a former head economist at the Italian treasury and visiting professor at the London School of Economics (LSE).

“I cannot see anyone else that can actually be supported by all political parties, at least parties supporting the current government,” he told AFP.

Draghi is credited with helping save the euro as ECB chief during the debt crisis a decade ago, by pledging to do “whatever it takes”, and has received plaudits during his year-long premiership.

The eurozone’s third-largest economy is powering out of the recession sparked by a lengthy lockdown in early 2020.

But Italy is relying on almost 200 billion euros ($226 billion) in grants and loans from the EU’s recovery plan — money that is conditional on major reforms, including to the justice system and public administration, which Draghi has only begun to implement.

There is the risk that the rainbow coalition Draghi has kept together for a year, which includes all the main political parties barring the far-right Brothers of Italy, could lose focus if he leaves.

“Unless there is a kind of package, a deal between the parties, to vote for Draghi but agree also for a new prime minister… anything could happen,” Codogno said.

Nobody has formally declared their candidacy for president, as is traditional, although there is intense jostling behind the scenes.

Draghi has refused to deny or confirm his interest, telling reporters last month: “I am a man and, if you like, a grandfather at the service of the institutions.”

“The time has come to elect a woman” to the Quirinale, urged leading cultural figures in an open letter published this weekend.