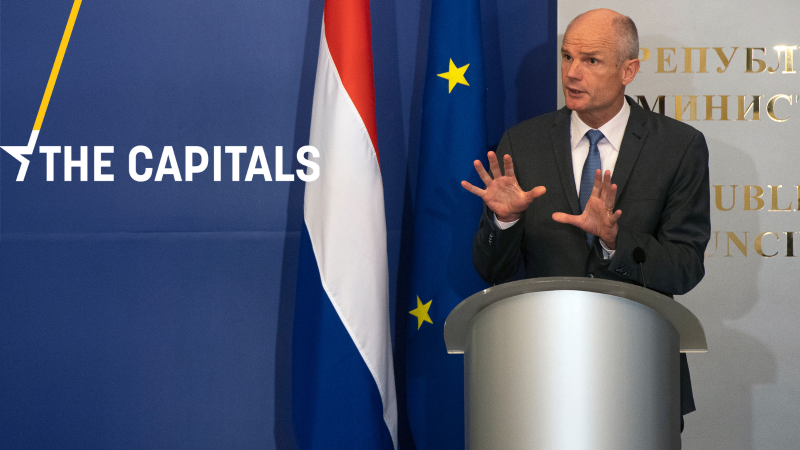 The Capitals is EURACTIV's daily newsletter from across Europe. [EPA/VASSIL DONEV]

The Netherlands has once again blocked Bulgaria’s Schengen accession due to corruption. But this time another problem has also risen: human trafficking.

The European Commission officially supports Bulgaria to become a member of the Schengen  passport free area. According to the EU executive, Bulgaria has met the technical criteria for membership. The Netherlands, however, remains the strongest opponent of Bulgaria’s accession and, during a visit on Wednesday (5 June) in Bulgaria, Dutch foreign minister Stef Blok repeated his opposition.

“We have heard your desire to join Schengen, but I hope you understand that the people of the Netherlands know about the large number of migrants who arrive in our country, we have to make sure the border control is uncompromising before we allow Bulgaria to Schengen,” Stef Blok said.

Reports suggest that the Netherlands has taken the scandals about the bribery scheme for the acquisition of Bulgarian passports very seriously and sees this as an argument against Bulgaria’s Schengen accession. The former chairman of the State Agency for Bulgarians Abroad, Petar Haralampiev, is still in custody, charged for this case. [More] (Krassen Nikolov, EUelectionsBulgaria.com)

Nomination for the EIB. The Bulgarian government nominated Lilyana Pavlova for the position of vice president and member of the Management Committee of the European Investment Bank. Pavlova was one of the newly elected MEPs. If her nomination is approved, Emil Radev will replace her. (Dnevnik.bg)

Hancock in Corbyn anti-semitic row. Matt Hancock, the health secretary and Tory party leadership candidate, has caused controversy by claiming that Jeremy Corbyn would be “the first anti-semitic leader of a Western nation since the Second World War” if Labour wins the next election.

His remarks on the 75th anniversary of D-Day, prompted a strong response from the Labour party, which said that “numerous candidates in the Conservative leadership contest have been accused of racism, Islamophobia, homophobia and misogyny, one of whom may be the next Prime Minister.”(Samuel Stolton, EURACTIV.com)

A borderline case. The European Commission warned Belgium about the state of its public finances, but the country escaped an excessive deficit procedure due to its high debt level. According to EU Commissioner Pierre Moscovici, Belgium is “too much a borderline case” to justify a reference to the budget penalty. (Alexandra Brzozowski, EURACTIV.com)

No rush. In an interview with German Die Zeit, Green party co-leader Robert Habeck said he wanted the grand coalition to continue until the end of its current mandate, set for 2021. Should the coalition, or ‘GroKO’ as it is known in Germany, collapse before the end of the mandate, then he would back new elections rather than form a new coalition with the business-friendly Liberals (FDP) and the conservatives (CDU/CSU).  (Claire Stam, EURACTIV.de)

‘French team’. Secretary of state for EU Amélie de Montchalin hopes to bring together French MEPs in a common national team in the European Parliament to focus on French priorities. Together with PM Edouard Philippe, she wants to have all French MEPs on Friday to present the government priorities.

As the far-right National Rally party won the European elections, they will be also invited. But the move is not popular with other political parties. Newly elected socialist MEP Raphael Glucksmann has already said he won’t attend the meeting and won’t “team up with National Rally”.(EURACTIV.fr)

EC praises France. The French deficit is expected to increase to 3.1% of the GDP this year, above the 3% EU limit. But the European Commission said this deviation was temporary and praised Paris for its structural reforms in recent years. However, the EU executive said the 2019 budget would be closely monitored, and particularly the French government’s planned spending to address the yellow vest crisis.

“We’ll do everything possible to stay within the parameters set out, but if my child is hungry and in order to feed him I have to re-discuss a parameter, my son comes first,” said deputy Prime Minister Matteo Salvini (Lega). “Italy is a serious country that keeps its promises,” said fellow deputy PM Luigi Di Maio (5-Star Movement), blaming the centre-left Democratic Party for having raised the debt in recent years. (Gerardo Fortuna, EURACTIV.com)

‘No’ to Grybauskaite? According to press reports, Poland is reluctant to back former Lithuanian President Dalia Grybauskaite’s bid for a top EU post. Poland and other V4 states have already pledged to support Maros Sefcovic.

Kopacz in the EPP. Ewa Kopacz, Poland’s former Prime Minister and now an MEP, was voted as a vice chairwoman of the EPP parliamentary group in the European Parliament.  (EURACTIV.pl)

Roma MEP to join EPP. Slovakia is sending for the first time a Roma MEP, Peter Pollák (OĽaNO), to the European Parliament. On Wednesday, he announced that he would be joining the EPP group and not the ECR, which was the group of his party predecessor in the EU Parliament.

EP Greens seek explanation. The Greens/EFA group in the EU Parliament, which includes Czech Pirates, has sent letters to the EU Commission and the EU Council regarding Czech Prime Minister Andrej Babis’s suspected conflict of interest.

A pro-EU pact. President Klaus Iohannis has invited all political parties to sign a national pact that aims to consolidate Romania’s EU course. The move comes after two days of consultations with parliamentary parties over a recent referendum on justice issues. Parties agreed to quickly integrate into legislation the results of the referendum, in which Romanians overwhelmingly voted against the pardoning of corruption convicts and against changing criminal legislation via government emergency decrees. (EURACTIV.ro)

Doubts over Greek surplus. Greece has made a reasonable start in the post-bailout period but its reform effort has slowed down in the last few months, the EU Commission said in its third report for Greece under the Enhanced Surveillance framework. The EU institutions question whether Greece will reach the 3.5% GDP surplus target especially after Greek Prime Minister Alexis Tsipras announced fresh anti-austerity measures in May. Finance ministry sources refuted the executive’s argument and insisted that the country would achieve a 4.1% surplus.

Greek member for ECR group. The ultranationalist pro-Russian Greek Solution (Elliniki Lysi), a newcomer to Greek politics, has joined the conservative ECR group. The party, which surprisingly got 4.2% of the vote, consists of one MEP, its leader, Kyriakos Velopoulos. (Theodore Karaoulanis, EURACTIV.gr)

The gas deal linked to oil prices. Cyprus’ Energy Minister George Lakkotrypis announced on Wednesday that a preliminary agreement was signed with energy companies Shell, Delek and Noble, to extract natural gas and oil from the deposit area ‘Aphrodite’ in Cyprus’s Exclusive Economic Zone in the Eastern Mediterranean.

The country’s earnings will be linked to oil prices. Lakkotrypis explained that at an average scenario with a medium price for oil, Cyprus will receive $9.4 billion over 18 years, or $520 million annually, from the moment oil and gas are exported, forecast for 2024 or 2025. Cyprus’s GDP currently stands at €21.5 billion. Another deal with ENI-TOTAL is expected to be finalised soon. (Theodore Karaoulanis,EURACTIV.GR)

Conservative party in trouble. The somewhat unexpected outcome of the recent EU elections has opened the Pandora’s Box in Croatia’s ruling conservative HDZ party, whose right-wing faction is now loudly highlighting the need for a leadership change.(Karla Juničić, EURACTIV.hr)

Cerar won’t be party president. Slovenian Foreign Minister Miro Cerar has said he would not be a candidate for the president of SMC party (ALDE) at the autumn congress but will stay in government. The party got just 1.6% of votes in the last EU elections compared to 35% in 2014. PM Marjan Šarec (LMŠ-ALDE) called on three other liberal parties in government to unite under his leadership. (Željko Trkanjec, EURACTIV.hr)

Orbán puts scientific research under state control. The Hungarian government has sent a controversial legislative proposal to parliament seeking to take control over research in the Hungarian Academy of Sciences (MTA). Minister of Innovation Laszlo Palkovics presented the bill late on Tuesday, despite strong criticism from the MTA and public demonstrations.

The new rules, which should come into force in September, will give financial control of research institutions to the Orbán government. Palkovics said the changes would ensure “resource-based resource allocation” and increase competitiveness. (Željko Trkanjec, EURACTIV.hr)

Tax problems. The European Commission has urged Lithuania to perform better when it comes to tax collection. The executive also said Vilnius should improve its financing of its healthcare system, in light of low social expenditures, increasing poverty and exclusion, disparities in regional development. (Angele Kedaitiene, http://eunewslithuania.com/)

Declining media freedom with Vucic. The government of Viktor Orbán in Hungary and the administration of Aleksandar Vucic in Serbia “have had great success in snuffing out critical journalism, blazing a trail for populist forces elsewhere,” said Freedom House in its Freedom and the Media Report for 2019.

“Both leaders have consolidated media ownership in the hands of their cronies, ensuring that the outlets with the widest reach support the government and smear its perceived opponents,” the report added.

The report’s author, Sarah Repucci, said that the decline of media freedom in the wake of Aleksandar Vucic’s coming to power “is a reason for serious concern.” (Beta-EURACTIV.rs)