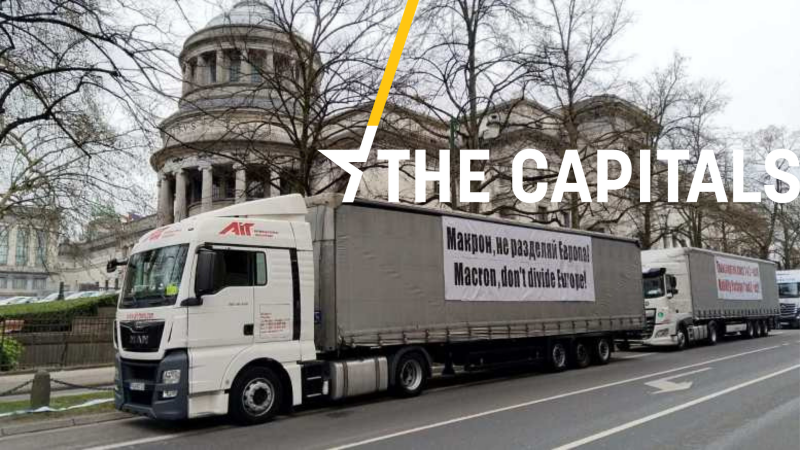 The Capitals is EURACTIV's daily newsletter from across Europe. [Photo by Georgi Gotev]

Bulgarian and Romanian truck drivers are going to protest on Wednesday (27 March) in front of the European Parliament in Strasbourg against the Mobility Package, EURACTIV’s partner Dnevnik.bg reported.

In Bulgaria, the Mobility Package has been dubbed the “Macron package” and the French president has been accused of “dividing Europe”.

Among the controversial reforms in the package is a compulsory return of drivers to their country of origin for their monthly rest. In Bulgaria, these measures are seen as discriminatory and aimed at creating an unnecessary handicap for haulers from countries on the EU’s fringes. The last word on the package belongs to the European Parliament.

Sofia wanted the whole legislative process regarding the reform to be postponed for the next Parliament. According to Bulgarian MEP Peter Kouroumbashev, Parliament President Antonio Tajani has made use of its prerogative to take out the vote from the EU Assembly’s agenda.

All Bulgarian MEPs, across party lines, except one, are mobilised against the ‘Macron package’. The only “dissident”, Nikolay Barekov (ECR), says the Package would bring better wages for Bulgarian truck drivers, and not supporting it would only benefit the oligarchs in the Bulgarian road transport business.

The Czech Republic is also worried about the legislation and tried to exclude drivers from posting of workers rules at the EU Council.

“Czech salaries are much lower than the western ones and ‘equal pay for equal work at the same place’ rule puts the business of Czech transport companies in danger due to higher wage expenses,” EURACTIV.cz reported.

Prague said, “Countries such as France, Belgium and Germany decided to protect themselves against cheaper competitors from central and east European countries and were not interested in any dialogue.”

“Any efforts by central and east European countries, which were offering a number of concessions during the negotiations, had been permanently blocked,” the transport ministry said.

EURACTIV Croatia reported that the government had asked Croatian MEPs to vote negatively on all the proposals. Zagreb believes that it would be more appropriate to wait for the new Parliament to convene, as well as the full report of the competent TRAN committee before getting into inter-institutional talks.

Flemish climate resistance: The revision of Article 7 of the Belgian Constitution would set ambitious climate goals and create a number of new institutions to ensure better climate policy coordination between the Federal Government and the Regions.

But as it requires a two-thirds majority in the national parliament and a majority in each language group, it will likely fail to be introduced during this legislative term due to Flemish refusal: Christian Democrats (CD&V) and liberal democrats (Open VLD) are skeptical, while nationalist N-VA openly opposed it.

A Brusseleir, a vote? All inhabitants of Brussels, whatever their nationality, have the right to vote in local elections.The Brussels parliament has now put forward a motion for resolution, which is calling for the extension of the right to vote for non-Belgian nationals residing in the Brussels-Capital Region for regional elections. (Alexandra Brzozowski, EURACTIV.com)

Cascade of Chaos: MPs are set to take part in a series of indicative votes on Wednesday in order to identify whether there is a parliamentary majority for a particular next move on Brexit. The different options are likely to include such scenarios as the possibility of conducting a second referendum and whether to become part of EFTA (European Free Trade Area). The votes will most probably continue into the following week.

Meanwhile, Ex-Brexit Secretary David Davis MP has said that the alternatives to getting Prime Minister May’s deal through the House of Commons could result in a “complete cascade of chaos”. (Samuel Stolton, EURACTIV.com)

German businessmen optimistic: German business leaders are more optimistic about the current situation and the next six months, ifo Business Climate Index has said. The index rose in March from 98.7 to 99.6 points and it’s the first increase following six successive declines.

No deal on transport: The German commission charged with proposing emissions cuts for the transport sector has failed to agree on enough steps to reach the country’s climate targets. It has managed to reach a consensus on measures that will lower emissions only by around two-thirds of the necessary amount. (Claire Stam, EURACTIV.de)

MEPs? Anyone will be just fine: Macron’s LREM party announced yesterday the first list of candidates for the EU election. Their ranks include a winemaker, a sailor, a cow breeder and former Italian minister Sandro Gozi. Second on the list is Pascal Canfin, an ex-MEP who vowed to fight for a “European climate bank”.  [Read more]

China, France, Germany and the EU tried to save what’s left of multilateralism during a meeting in Paris on Tuesday. “We cannot let mutual suspicion get the better of us,” Xi said at a joint press conference with Emmanuel Macron, Angela Merkel and EU Commission President Jean-Claude Juncker. At the same time, in Brussels, the Commission launched its 5G plan in an effort to secure the network against any spying, with Huawei being the main target. (EURACTIV.fr)

The bus hero: A 13-year-old Egyptian boy who alerted the police during an attempted mass murder, saving the life of 50 children taken hostage by their school bus driver, was granted Italian nationality. “He has shown to have understood the values of this country,” Interior Minister Matteo Salvini said. (Gerardo Fortuna, EURACTIV.com).

Racism and xenophobia on the rise: Spain’s National Security Council has warned that xenophobia, hate crimes and religious intolerance are on the rise in Spain. The institution found that while “Spaniards’ attitude on immigration continues to be more welcoming” than the EU average, there has been a “slight drop in the positive trend” in recent years, El País and other Spanish online media reported. (EUROEFE.EA.es)

Urgent bill for private debt restructuring: The Greek government submitted late last night a draft new framework for the protection of nonperforming loan (NPLs) borrowers’ primary residences. The country cannot agree with its creditors on the issue, which is due to be discussed again at a Eurogoup meeting on 5 April in Bucharest. (Theodore Karaoulanis, EURACTIV.gr)

Poland and Germany: “Close cooperation between Poland and Germany is fundamental for the development of the European community. That’s why we want Poland to be in the EU’s hardcore. We would also like Warsaw to be in the eurozone, but of course, this is up to Poland’s government to decide,” said Rolf Nikel, Germany’s ambassador to Poland in an interview. However, he dismissed the notion that Germany should pay Warsaw reparations for WWII.

Who is more European? MEPs from the European Coalition, a newly established pro-EU bloc, announced that they would try to debunk the narrative that the ruling Law and Justice (PiS/ECR) is a pro-EU force. Instead, they want to show that the party wants to destroy the EU and to this end, they will be producing an audit of actions of PiS MEPs, so that “Poles can themselves see that the vote for PiS is a lost vote”, said Dariusz Rosati (EPP).

Babiš investigation concludes: The police have concluded an investigation of alleged EU subsidy fraud involving Andrej Babiš. Czech PM Babiš has been charged with the wrongful acquisition of €1.9 million for the Stork Nest Farm project. Website Neovlivni.cz quoted police sources as saying that Babiš should appear in court, but the decision lies in the hands of the state prosecutor. (Aneta Zachová, EURACTIV.cz)

Another Arab rebuff: The president of the Romanian Senate, Calin Popescu Tariceanu, was forced to cancel his official visit to Morocco, planned for this week, at the request of the Moroccan side. PM Viorica Dancila drew the ire of the Arab world after she said, at a pro-Israel conference in Washington, that Romania would move its Israeli embassy from Tel Aviv to Jerusalem. King Abdullah of Jordan cancelled on Monday his visit to Romania, following the PM statements.

Former president, an MEP wannabe: Romania’s ex-president, Traian Basescu, opens the list for the EU elections of PMP (EPP), followed by the party’s president, Eugen Tomac. The centre-right party is, however, credited with only 3.2% of the voting intentions, below the 5% minimum threshold.

Exploratory drilling for oil and gas: Royal Dutch Shell has said it will start oil and gas exploration drilling next month off Bulgaria’s Black Sea coast. Shell has teamed up with Spain’s Repsol and Australia’s Woodside Energy after sealing a contract with Bulgaria in 2016 for deepwater exploratory drilling as part of Sofia efforts to end its reliance on Russia’s natural gas supplies.

€500 for Party: A Slovenian politician has left the EU elections list of the far-right Slovenian National Party because its leader, Zmago Jelinčič, asked Gregor Preac to pay €500 to the party and €1,000 for himself. “Of course I asked for money. All MEPs are giving it for Party”, said Jelinčič. (Željko Trkanjec, EURACTIV.hr)

Chinese are coming: Croatian tourism is expected to keep going from strength-to-strength this compared to 2018, as a 28% increase of Chinese tourists is projected (around 300,000 people).  (Željko Trkanjec, EURACTIV.hr)

Middle-class protesters: Mostly middle-class people participate in the anti-government protests in over 100 cities in Serbia, according to a survey conducted by the SeConS Group and the Friedrich Ebert Foundation. the survey showed that their motivation for protesting is the lack of media freedom, government corruption and the absence of solutions to problems such as unemployment. (Julija Simić, Beta-EURACTIV.rs)

Honorary Sarajevan: Bosnia’s capital has decided to make Slovenia MEP Tanja Fajon an “honorary citizen of Sarajevo”. One of the reasons is was “the extraordinary merit of spreading the truth about the events in BiH”.