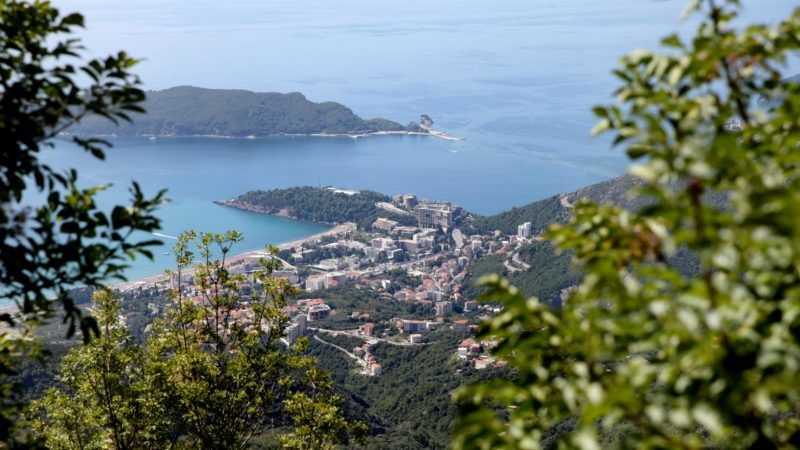 A picture made on 19 September 2016 shows a general view of the Montenegrian Adriatic coast in Budva, Montenegro. [Koca Sulejmanovic/EPA]

For nearly a decade after Montenegro split from Serbia in 2006, Moscow cultivated close ties with the former Yugoslav republic, and money poured in from Russian investors and tourists.

It was a love affair underpinned not just by commercial and diplomatic logic but also by historic, religious and linguistic ties between the two Slav countries.

“Back in 2006 Montenegro was advertised as a desirable destination for Russians, because it is a beautiful country and an Orthodox Christian one,” said Vadim Verhovski, a Russian investment banker who, with partners, has invested €25 million to buy land near the coastal town of Budva.

Now the romance has turned to rancor. Montenegro blamed Russia for an alleged plot to assassinate its prime minister last October which officials said was aimed at blocking its entry to NATO. The Kremlin called that absurd.

The chill is hitting tourism: latest available data, for March, showed Russians accounted for 7.3% of all tourist overnight stays that month compared to nearly 30% in March 2014 and 19.2% in March 2016.

Advertising billboards in Russian, promoting luxury apartments with views of the Adriatic, were once ubiquitous along the coastal highway. Now they have vanished, and Russian-language signs have largely disappeared from shops.

Prime Minister Duško Marković said a recent Russian ban on imports of wine from Montenegro was linked to its NATO membership. Moscow said it had discovered banned pesticides in the wine.

“We are prepared for any decision (by Russia) and nothing is going to deter us from the path we decided to take,” Marković told reporters.

In an emailed statement to Reuters, he said: “The Balkans for centuries has been the scene of a struggle between the West and the East. Like other states in the region, Montenegro has strong links with the East, but in the 2006 we made a key decision that we would like to adopt Western standards and values.”

For a country of just 650,000 people with 2,000 military personnel and an area smaller than Connecticut, Montenegro has strategic value out of proportion to its size.

Its dramatic Adriatic coastline, the source of its appeal to tourists, is also attractive in strategic terms because of its easy access to the Mediterranean.

A former senior government official, who declined to be named, said Moscow made an official request in September 2013 to use the Montenegrin port of Bar as a naval logistics base en route to Syria. After pressure from NATO, the government declined.

“The strategic position of our country is important (to NATO) and especially the Adriatic Sea,” Marković said.

When the alliance welcomes Montenegro at its summit in Brussels on Wednesday and Thursday, it will mark its first expansion since neighbors Albania and Croatia joined in 2009.

The country is surrounded by NATO members or hopefuls, except for Serbia, which maintains military neutrality.

“Montenegro may be small, but its presence at the NATO summit as a new member is a message to the Western Balkans to show (that) the path towards Europe is open,” a senior NATO official told Reuters. “It is also a message to Donald Trump that NATO is growing, it has new friends.”

Still, NATO is a divisive issue among Montenegro’s own people. Many see Russia as a historic friend – a traditional ally against the Ottoman Empire, and the first nation to establish diplomatic relations with Montenegro in 1711.

Many remember a 1999 NATO bombing raid that killed 10 people in Montenegro, part of a wider intervention by the alliance to end Serbian leader Slobodan Milosevic’s campaign of ethnic cleansing in Kosovo.

“A vast majority (of people) supports Russia, you cannot exclude emotions,” said Dragan Krapović, mayor of Budva, which counts around 1,000 Russians in a population of 16,000.

Montenegro’s president has named a former head of the secret police as the prime minister-designate who will try to form a new government.

“Russia supported Montenegro’s independence referendum, and many people invested money after that. Now they feel cheated,” he said.

Since the October election, Montenegro has been in political paralysis, with all opposition parties boycotting parliament. Some analysts fear that NATO membership could deepen the crisis.

“The move could even prove to be destabilizing from a domestic perspective, given deep societal divisions on the subject,” said James Sawyer of the Eurasia Group, a political risk consultancy.

“The good governance reforms that are supposed in theory to be part of the NATO accession process have largely been cosmetic, while many other important reforms remain to be done.”

Verhovski, the Russian investor, bought 13 hectares of land south of Budva a decade ago, to build a tourist complex including a hotel and villas. Bogged down by the process of getting permits, he has yet to lay a single brick, but he hopes to finally start construction this year.

“There is a lot of potential in Montenegro for investment in infrastructure, for example, or ski resorts. Montenegro has a lot to offer. And we hope that with NATO membership it will become more predictable for investors,” he said.

Vladimir Chizhov, Russia's ambassador to the EU, told a group of journalists yesterday (3 May) that his country could offer an alternative to Macedonia, to the Western Balkans and to any countries, as, in his view, “there is always an alternative to Euro-Atlantic integration”.