‘Enough is enough’ May says after London attack 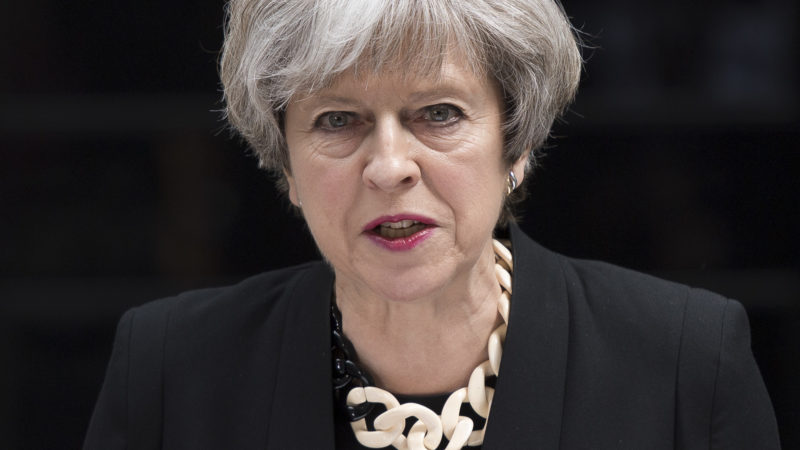 After the third militant attack in Britain in less than three months, May said Thursday’s national election would go ahead. But she proposed regulating cyberspace and said Britain had been far too tolerant of extremism.

“It is time to say enough is enough,” the Conservative leader said outside her Downing Street office, where British flags flew at half-staff.

“We cannot and must not pretend that things can continue as they are,” May said, adding that Britain was under attack from a new breed of crude copycat militants.

One French national and one Canadian were among those killed. At least 48 people were injured in the attack. Australia said one of its citizens was among the injured.

London police arrested 12 people in the Barking district of east London in connection with the attack and raids were continuing there, the force said. A Reuters photographer saw another raid take place in nearby East Ham.

Less than two weeks ago, a suicide bomber killed 22 children and adults at a concert by U.S. singer Ariana Grande in Manchester in northern England. In March, in a attack similar to Saturday’s, five people died after a man drove into pedestrians on Westminster Bridge in central London and stabbed a policeman.

May said the series of attacks were not connected in terms of planning and execution, but were inspired by what she called a “single, evil ideology of Islamist extremism” that represented a perversion of Islam and of the truth.

She said this ideology had to be confronted both abroad and at home, adding that the internet and big internet companies provided the space for such extremism to breed.

British and world leaders condemned the London attack Sunday, reacting with both outrage and solidarity, as Pope Francis urged believers in St Peter’s square to pray for the victims.

London Mayor Sadiq Khan said the attack was “a deliberate and cowardly attack on innocent Londoners and visitors to our city enjoying their Saturday night,” adding: “There is no justification whatsoever for such barbaric acts”.

Opposition Labour Party leader Jeremy Corbyn: “Brutal and shocking incidents reported in London. My thoughts are with the victims and their families. Thank you to the emergency services.”

Dreadful news from London. My thoughts are with all those affected,” said Scottish Nationalist Party leader Nicola Sturgeon.

Chancellor Angela Merkel said “today we are united across borders in horror and mourning, but also in determination,” she said in a statement.

“For Germany, I reiterate that in the fight against all forms of terrorism, we are resolutely at Britain’s side”.

European Commission chief Jean-Claude Juncker, in letter to British Prime Minister Theresa May: “I know that the people of London will carry on defiantly, just like the people of Manchester showed us such a short time ago. The European Union, its Member States and its allies around the world will stand with them in solidarity.”

“In the face of this new tragedy, France is more than ever at Britain’s side. My thoughts go out to the victims and their loved ones,” said French President Emmanuel Macron.

Italian Prime Minister Paolo Gentiloni said: “In memory of the victims and the injured, we stand together in a shared commitment to combatting terrorism.

One response to “‘Enough is enough’ May says after London attack”