EPP ready to sacrifice Weber to get EU Commission leadership 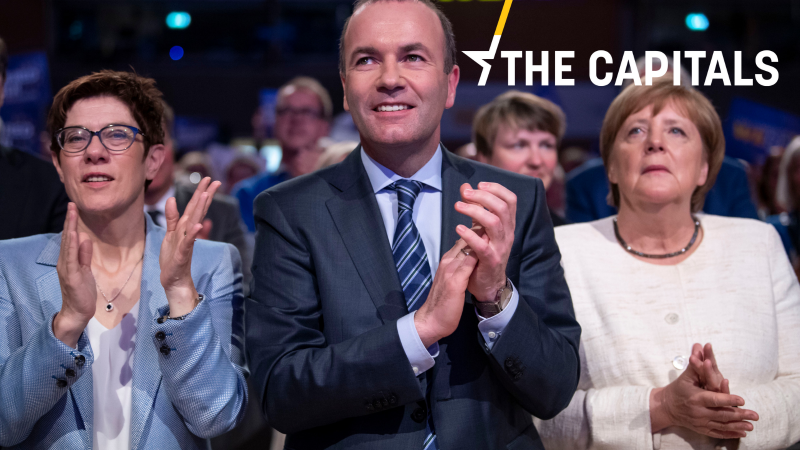 Follow the EU summit’s latest developments on our live blog.

The centre-right European People’s Party, the relative winner of the EU elections, is now ready to sacrifice the much-debated Spitzenkandidaten process, and with it its lead candidate Manfred Weber, as long as it gets the European Commission presidency, EURACTIV has learnt.

At a meeting of the EPP group in the European Parliament, sources said that conservative lawmakers agreed that socialist Frans Timmermans should in no way become the next EU Commission chief, even though German Chancellor Angela Merkel had agreed to it as part of a broader package deal with other political families.

“EPP lawmakers could reconsider their opinion on the Spitzenkandidaten process as long as they get the presidency of the EU executive,” a source said.

EURACTIV understands that in such a scenario, the name of Michel Barnier is likely to reappear and that Emmanuel Macron’s centrist Renew Europe political group is supportive of Barnier’s appointment. Greek PM Alexis Tsipras said last week he would support “any moderate candidate who has not offended the people of Europe’s south like Weber did”.

“It would be a crime against intelligence, common sense and responsibility, to deprive oneself of the only potential candidate who combines so many qualities, and no obvious defects,” said a passionate editorial in Le Soir.

An EPP source who spoke on condition of anonymity expressed deep concerns about Chancellor Merkel and EPP chief Joseph Daul, saying their readiness to ditch Weber’s candidacy had “killed” the centre-right group.

“At our last internal meeting, all centre-right leaders agreed to back our Spitzenkandidat, Manfred Weber, for the European Commission’s presidency,” the source said. “We never agreed on having him as EU Parliament president.”

The same source explained that Weber’s success was crucial not only for Europe but also for German conservatives: “Weber could be a critical backup in the transition from Merkel to Annegret Kramp-Karrenbauer.”

EURACTIV also learnt that Merkel got angry with disobedient conservative leaders who opposed her plan to nominate Timmermans at the Commission as part of a broader package deal. At an EPP pre-summit, she reportedly left the room “slamming the door shut”.

EPP sources expressed fears last week that Merkel would bow to pressure from Macron, whose objective, according to them, is not to oppose Weber but to “kill the EPP”. Before the summit, Merkel urged all sides to take a step back.

Meanwhile, in Berlin, German media reported that Merkel’s diplomatic and negotiating skills had failed. She was taken by surprise by the opposition within the EPP, including from EPP moderates like Ireland’s Leo Varadkar.

She was unable to enforce the plan she had conceived in Berlin just before the EU summit  and which got the backing of EPP chairman Daul, Weber and the party leaders of the CDU and CSU, Kramp-Karrenbauer and Markus Söder.

The “Berlin plan” provided Timmermans with the Commission top job while installing Weber as the new European Parliament president.

Der Spiegel online quoted an EU diplomat as saying: “This summit has proved only one thing beyond doubt: It is no longer the case that when Germany and France have agreed on something, it means the matter is done”.

Macron put the blame for the summit failure squarely on the EPP. According to him, the EPP is basically responsible for the “bad image of Europe” and said the failure was the result of two divisions: one within the EPP and another between Europe’s east and west.

Macron also praised Merkel’s attempt to convince other EPP leaders about the proposed package deal. “There has been close coordination with the German Chancellor who has engaged within the EPP family to find a compromise,” the French President said. (EURACTIV.fr)

Similarly, Spain’s socialist PM Pedro Sánchez criticised the EPP for opposing the “Berlin agreement”. “We have been very close, very close, but the EPP has not respected an agreement that the two Spitzenkandidaten had achieved”, Sánchez said according to EURACTIV’s partner EFE.

The Spanish PM, who left the EU Council frustrated, said: “Sincerely, we all need to rest and reflect the risk of opening an institutional crisis between the EU Parliament and the Council. We have to avoid it and show that we can reach an agreement.” (EURACTIV’s partner EFE).

Alexis Tsipras reiterated his support for Timmermans and returned to Athens to campaign for the snap elections due on 7 July. At the summit today, Sánchez will represent him (Theodore Karaoulanis, EURACTIV.gr).

Chances for Michel. Outgoing Belgian PM Charles Michel, who is among the names mentioned to replace  Federica Mogherini as EU High Representative for foreign affairs, could get a “nice exit” from the Belgian government if he gets the nod. Securing the job would promote Michel as a mediator at EU level, media commentators said. (Alexandra Brzozowski, EURACTIV.com).

The V4 group is staunchly opposed to the candidature of Frans Timmermans, who waged a  bitter battle against the current Polish and Hungarian leaders for breaching the rule of law.

Polish PM Mateusz Morawiecki said the V4 countries and Italy were interested in choosing candidates who are acceptable to everyone and who do “not divide” the EU.

But others believe Timmermans would not be so bad. Former S&D MEP Dariusz Rosati said the suspension of the EU summit “is very risky”. The Dutchman, he said, is “not a bad candidate for Poland,” adding that V4 countries could eventually be voted down or forced to accept the “worst candidate”. According to him, it would be best for Poland to accept Timmermans, but in exchange for some other concessions. (Mateusz Kucharczyk, EURACTIV.pl)

Slovakia, the only V4 member whose ruling government party SMER-SD belongs to the socialist family, seems to be taking on the role of messenger. “I was certainly a mediator, a contact person”, PM Pellegrini said and reiterated the V4’s concerns about Timmermans. “For now, the EU leaders know where the red lines are and which combinations are not possible,” he said.

For Slovakia, the quality of a candidate is more important than whether he or she was a Spitzenkandidat, but will have to “build bridges, unite and suppress conflicts for the next five years”, Pellegrini added. (Lucia Yar, EURACTIV.sk)

The Czech position remains clear and simple: Timmermans should not lead the next Commission. Asked about his own proposal on the next EC’s president, Czech PM Andrej Babiš said the V4 came up with some concrete proposals, without mentioning any names. At the same time he strongly opposes all Spitzenkandidaten but on the other hand said that if the system needs to be applied, then he prefers Margrethe Vestager. (Aneta Zachová, EURACTIV.cz)

Georgieva out. Bulgarian candidate Kristalina Georgieva is out of the race to head the European Council, Prime Minister Boyko Borissov said. “The liberals don’t agree with this. That is why there is no decision,” Borissov said but added that Italy and the V4 countries were now proposing her for the EU top diplomatic job to replace Mogherini. (Dnevnik.bg)

Lithuania would be more in favour of Weber as next Commission chief, considering his EU Parliament experience but above all according to Vilnius, he won the EU elections. (Angele Kedaitiene, http://eunewslithuania.com/)

And in other news from EURACTIV’s network…

Russia also wants to invest in Croatia.“No one can invest in Croatia as much as Russia can, neither the EU nor the US, but Croatia should first create the necessary investment preconditions”, Russian Ambassador Anvar Azimov said.

In the first two months of 2019, trade between the two countries increased by 132% compared to the same period in 2018. Croatia last year exported $147.7 million to the Russian Federation while imports reached $450.9 million. China is also very interested in the Croatian market. (Željko Trkanjec, EURACTIV.hr)

Sending the right message. The Eurogroup on 8 July will discuss the Greek economy as part of the third report on enhanced surveillance, a Eurozone source told EURACTIV’s media partner Athens-Macedonian News Agency. Just a day after the general elections, the source said it’s a way to deliver the “right message” to the new government that emerges.

Russia, China as hybrid threats. Members of the Russian intelligence services operating in Slovakia, mostly under diplomatic cover, sought to recruit employees in the central bodies of state administration, security forces and in the field of energy and defence, the latest Annual Report of the country’s intelligence services (SIS) found.

Compared to previous years, the report did not hesitate to name foreign actors that became part of hybrid threats. Besides Russia, SIS indicated that Chinese intelligence services showed interest, focusing on information and telecommunication technologies. “So far, the Slovak Republic has not been a subject of more intense, specifically focused hybrid campaigns by any state or non-state actors, nor it has faced more aggressive means of threats,” SIS said.

Last week, EURACTIV’s partner EFE quoted US ambassador Gordon Sondland as saying that Washington’s real objective is China. “The real goal is for the US and the EU to partner to tackle China and establish together a global system where we set the standards of conduct, and China follows our example, not the other way around.”

Fence at the border with Italy. Massimiliano Fedriga, Friuli-Venezia Giulia president (an autonomous region around the city of Trieste at the Slovenian-Italian border) and member of Salvini’s Lega party, said mixed border patrols, which were launched this week, are not the ultimate solution but just the beginning. “If necessary, we are ready for other solutions”, he said, citing the possibility of a fence at the border with Slovenia. (Željko Trkanjec, EURACTIV.hr)

Pressure on Serbia while encouraging Kosovo.The pressure the West has been putting on Serbia is obvious, while the US and its allies have been encouraging Kosovo to keep the tension in the region high, the newly appointed Russian Ambassador to Serbia Alexander Botsan-Kharchenko said, according to news website Sputnik. (beta.rs, EURACTIV.rs)

Diversification of gas supply. “BiH currently has only one source of natural gas supply (through Serbia with Russian gas) and must make efforts to provide alternative sources. The state must choose the most favourable supply option in order to diversify the sources of supply and ensure that citizens and businesses do not remain without this important energy source, ” said Peter Duffy, USAID Mission Director in BiH. (Željko Trkanjec, EURACTIV.hr)