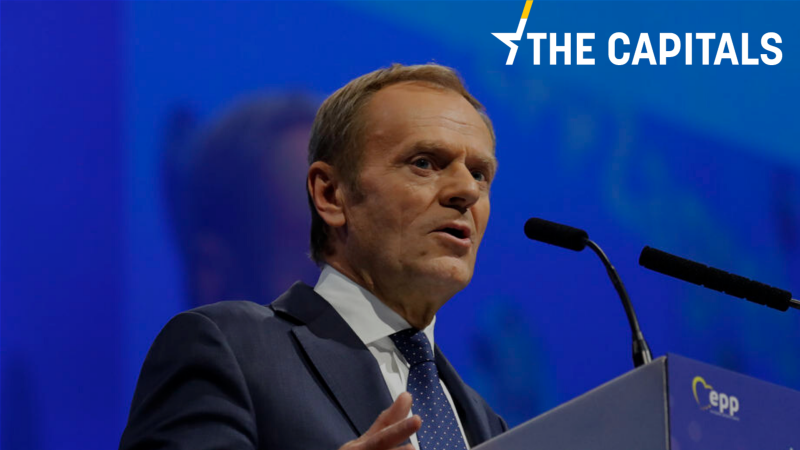 AFP reported that an EPP internal report is ongoing and is expected to be completed in December. [EPA/ ANTONIO BAT]

Tea Trubić Macan | ZAGREB. “Having lived on the other side of the Iron curtain, I have experienced ‘Europe of two speeds’ at first hand. The main role of the EU is to even out the playing field, especially for the small countries”, the newly elected EPP President Donald Tusk told the Croatian National Television. He also vowed to fight against the divide between what he called an ‘old’ and ‘new’ Europe.

The EPP also said yesterday (21 November) that it would decide in late January whether it would keep the party of Hungary’s nationalist Prime Minister Viktor Orbán in their ranks. AFP reported that an EPP internal report is ongoing and is expected to be completed in December.

“Then I will start a very intensive consultation,” Tusk said.

A source told EURACTIV.com that some right-wing parties link Fidesz’s EPP membership with Orbán’s stance on migration and his denial to accept refugees. “All options are on the table,” the source said.

Meanwhile, former Italian PM Silvio Berlusconi warned about European values being at risk because of the cooperation with “communist China”.

“Communism does not stop at the borders. Be wary of the communist countries, which are a challenge and a threat. Anyone who knows Chinese politics is aware of the threat that it presents to future generations,” Berlusconi said.

He also called for the reinforcement of the EU military in order to “deter migrant waves from African countries” and described the current Italian government as incompetent and unqualified.

Besides, the Croatian PM, Andrej Plenković, had called for reforms of the EU election system, as this could “save” the Spitzenkandidaten system.

Turkey arrests German Embassy lawyer. The Turkish police have arrested a lawyer of the German embassy in Ankara. The lawyer was checking the likelihood of certain asylum-seekers facing imprisonment by local police when returning to Turkey, the German media reported. Turkish lawyer Yilmaz S. was arrested in Ankara on 17 September and according to DW, the Turkish police seized hundreds of files on asylum applications, including Kurdish activists and followers of Fethullah Gulen.

The Turkish media said Yilmaz S. was accused of “connections to a terrorist organisation” but according to the information from NDR, WDR and SZ, the responsible public prosecutor’s office also accused the lawyer of espionage, on behalf of Germany. Turkish President Recep Tayyip Erdoğan has repeatedly accused Germany of harbouring alleged backers of the 2016 coup attempt.

Read the full story in English on Deutsche Welle

Meanwhile, Serbian MP Milovan Drecun, chairman of the parliamentary committee on Kosovo, has said there are many Bulgarian spies in Serbia. “Bulgaria and Croatia have a spy centre in Skopje,” said Drecun, who has close ties with Serbian President Aleksandar Vucic.

He noted that Bulgaria is probably behind a noisy scandal caused by a video circulated on social media networks. It shows an employee of Serbian special services accepting money from former Deputy Military Attache of Russia in Belgrade, George Kleban. The video forced authorities to convene a meeting of the National Security Council in Belgrade capital, as well as a meeting between President Aleksandar Vucic and the Russian ambassador.

Serbia’s Security and Intelligence Agency has officially confirmed the authenticity of the video. Drecun believes that this scandal was produced by Bulgarian spies and could hurt Russian-Serbian relations.

Just a week earlier, Bulgaria expelled one of the secretaries at the Russian embassy on suspicion of espionage. The following day, Sofia refused to issue a visa to a Russian citizen who had been appointed as a defence attaché in the Bulgarian capital.

French editors VS Google on copyright. The battle between French online editors and Google on copyright has escalated. On Tuesday (20 November), big press organisations and  Agence France Presse filed a complaint against Google with the French Competition Authority. They are accusing the American giant of violating the “neighbouring right”, a new mechanism , which is meant to promote a better sharing of digital revenues. In October, Google announced that it would not pay online news publishers from France to display their content, upsetting both online publishers and the French government.

Press organisations have received the support of nearly 1,500 European media professionals, writers, publishers, producers, directors, musicians or lawyers, who have signed a platform calling on the EU to “strengthen texts so that Google can no longer misuse them”. (EURACTIV.FR)

Hard times for Five Star. In an online ballot on the party’s e-voting platform Rousseau, Five Star Movement’s activists rejected the proposal not to take part in regional elections in Emilia-Romagna and Calabria. The vote is considered a blow to Luigi Di Maio’s leadership, as he supported an electoral ‘break’ to avoid a highly likely electoral disaster in both regions. “For sure, the Movement is facing hard times, I’m the first one to admit it,” said Di Maio in a press conference, adding that some problems should be fixed but that they will do their best for the elections.

Another centrist party. Meanwhile, Italian MEP Carlo Calenda has announced the formation of new centrist party Azione, which will be under his leadership. Calenda, who sits with socialists in the European Parliament, broke away from centre-left Democratic Party (PD) in protest to the deal to form a coalition with Five Star Movement. (Gerardo Fortuna | EURACTIV.com)

Migration message. “Europe can no longer pretend that the migration crisis only affects the member states at the union’s borders,” Greek PM Kyriakis Mitsotakis said at the EPP Congress in Zagreb. He also described the Dublin Regulation as “lamentably insufficient.”

Greek government sources told EURACTIV that the discussion to change the Dublin Regulation will immediately start once the new EU executive is in place and that Athens is close to the proposals recently made by German Interior Minister Horst Seehofer (CSU).  (Sarantis Michalopoulos| EURACTIV.com)

Competitive primaries? In the next couple of weeks, PO, the biggest opposition party, will hold primaries before the presidential elections next year. For a long time, there has been only one candidate – Małgorzata Kidawa-Błońska- mainly supported by the party’s establishment. But Jacek Jaśkowiak, president of the city of Poznan, announced that his electoral bid and challenge Kidawa-Błońska.

He is known to belong to the more left-wing members of the party, while Kidawa-Błońska is considered more of a centrist. The results are expected by mid-December. (Łukasz Gadzała | EURACTIV.pl)

No big opposition bloc before the elections. Four Slovak opposition parties have failed to agree on a common list before the general elections after a few days of negotiations. The “For people” (party of ex-president Andrej Kiska), Freedom and Solidarity (ECR), and the common list of Progressive Slovakia (ALDE) and Spolu-OD (EPP) will not join forces and will run as three separate entities. According to reports, Andrej Kiska preferred a wider coalition bloc of six opposition parties, including the Christian Democrats and OĽaNO, which are both part of the EPP group. But this formation was rejected by both parties. (Zuzana Gabrižová | EURACTIV.sk)

Czech Special envoy for the EU institutions Jana Hybášková said that Czechs face problems in filling the posts in middle and senior management because they lack important skills. Most candidates for EU positions do not pass the European Personnel Selection Office (EPSO) tests, she said. (Aneta Zachová | EURACTIV.cz)

Romanians vote for the president. Romanian citizens living abroad can vote in the second round of the presidential elections as of Friday. They have to choose between president Klaus Iohannis, who is seeking a second five-year term, and former prime minister Viorica Dancila. For the first time, the diaspora will have a chance to vote in the presidential elections for three days, as thousands of persons could not cast their vote in previous elections due to the long queues at polling stations. (EURACTIV.ro)

Finance Minister’s doctoral dissertation to be scrapped. The University of Belgrade’s Professional Ethics Committee will instruct the University Senate to act according to the rulebook on annulling doctoral dissertations in the case of Finance Minister Siniša Mali because it has unanimously determined the existence of non-academic conduct in his work, University Rector Ivanka Popović has said. In her words, Mali violated the University code of ethics by using other authors’ texts without citing them. (EURACTIV.rs)