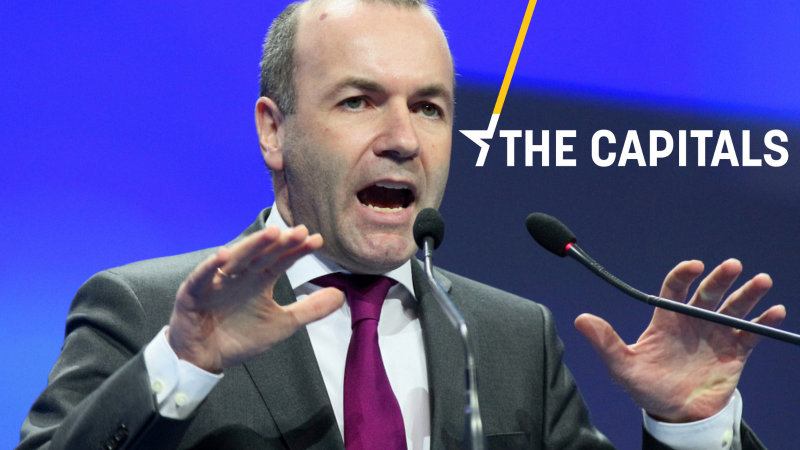 Leftist Greek premier Alexis Tsipras lashed out against Weber, saying that he is “anti-Greek” as he backed a “Grexit” from the Eurozone. [Shutterstock]

Weber in Athens: Manfred Weber, the leading candidate of the centre-right European People’s Party (EPP), will officially launch today in Athens his campaign ahead of the EU elections. He will speak at Zappeion Megaron, a symbolic building where Greece’s EU accession treaty was signed and where party leaders usually make their first post-election statements.

New Democracy (ND) leader Kyriakos Mitsotakis has been supportive of Weber’s candidature since the beginning and their main message today will be the “fight against populism”, according to Greek media reports. In an interview with Alpha TV, Mitsotakis said Weber was the first EU politician who backed ND’s demand to reduce the primary surpluses as part of the country’s bailout commitments.

Greek leader Alexis Tsipras lashed out against Weber, saying that he is “anti-Greek” as he backed a “Grexit” from the Eurozone during the country’s tough negotiations with its lenders and from Schengen during the migration crisis.

“Voting for Weber means a vote in the transformation of democratic Europe into an authoritarian Europe, into a Europe of racism,” Tsipras said.

Tsipras has said a progressive alliance with leftist, socialist and green politicians should be formed in the next EU Parliament to prevent Weber from becoming the next EU Commission chief. (Sarantis Michalopoulos, EURACTIV.com).

Grades for ministers: Ahead of the regional, federal and EU elections on 26 May in Belgium, ministers of the Michel government received school marks by the French-language Le Soir and Flemish De Standaard newspapers. After the collapse of the Belgian ruling coalition in December, however, the low average score was influenced by frequent internal quarrels, among other factors. The main take-away from the poll is that most ministers prioritised their own party over the success of the federal government. (Alexandra Brzozowski, EURACTIV.com)

May to step down?: Theresa May has promised to step down as soon as she has passed a Brexit deal, but demands for her to name a departure date are intensifying among Conservative MPs who fear that the party faces a drubbing in next month’s European elections.

Although May cannot be forced to face another no confidence vote from her party until December, Graham Brady, the chairman of the 1922 committee, which represents Conservative backbenchers, is understood to be planning to tell the prime minister she must resign before the end of June. (Benjamin Fox, EURACTIV.com)

Traditional anti-war protests: Thousands of Germans participated in traditional anti-war Easter marches in about 50 German towns. On Sunday, 1,000 people joined the demonstration in Berlin, calling for a stop to weapon exports and military missions abroad as well as for Germany to quit NATO. Protesters also criticised that Germany’s ban on arms exports to Saudi Arabia, which was introduced in October 2018 after the murder of Jamal Khashoggi, has recently been loosened. German Easter marches have been a yearly tradition since the 1960s and peaked during the Vietnam War. (Florence Schulz, EURACTIV.de)

Macron to face journalists: “Bring sandwiches, as it may last long,” former MEP Daniel Cohn Bendit warned journalists ahead of the first “real” press conference by Emmanuel Macron since he took power, next Thursday at the Elysée. The meeting that was cancelled last week after the Notre Dame blaze will focus on the national debate that has taken place since January in France.

Lack of green ideas: Pascal Canfin, number two on Macron’s En Marche EU elections list, told Europe1 radio that he expected “additional measures” on climate and environment from Macron, as “it is the first emergency”. (EURACTIV.fr)

According to the latest polls, the socialist PSOE is set to win the elections, but without an absolute majority, so it will at least need the support of left-wing party Unidas Podemos, whose main candidate, Pablo Iglesias, last night offered his backing to PM Pedro Sánchez.

The centre-right PP could forge a pact with centrist Ciudadanos, with the support of far-right Vox, a formula currently in place in Andalusia. (EuroEFE.EURACTIV.es)

Vote in October? According to Corriere della Sera, Matteo Salvini, the leader of right-wing Lega, told Fabio Cantarella, a rising city councilman in Sicily, that he will not be a candidate for the EU as he will need him for snap national elections in October, revealing his plan to get rid of the Five Star Movement after the summer.

Increased military spending: Poland plans to spend €43 billion up to 2026 to boost its military. The aim is to spend 2.5% of GDP on defence by 2030. Poland also hopes for increased US military presence on its territory and according to some sources some kind of deal with the White House is in the making, but it faces resistance from the Pentagon. Read more (EURACTIV.pl)

A dubious swap at the Ministry of Justice: Czech justice minister Jan Knezinek suddenly left office just one day after police investigators informed the state attorney that PM Andrej Babiš should go on trial for alleged fraud over EU subsidies. Babiš, who denies all allegations and calls the case a “plot”, could face up to ten years in prison. (Ondřej Plevák, EURACTIV.cz)

Cleared for presidency: Romania’s Supreme Court acquitted Calin Popescu Tariceanu, president of the Senate and leader of the ALDE party (a member of the namesake European party) of perjury accusations. The anticorruption directorate (DNA) accused Tariceanu of making false statements in another corruption case, but the judges rejected the accusations in May 2018. DNA appealed the decision, but the Supreme Court has issued a final acquittal verdict. Tariceanu can now focus on his plans to run for Romania’s presidency. (EURACTIV.ro)

Continuing scandal: The scandal over the purchases of luxury properties at favourable prices, which has already led to the resignation of some senior politicians, continues. According to his property declaration, Minister of Defence Krasimir Karakachanov bought in 2017 a Sofia apartment below the market price. He also did not declare a 117 square metre terrace and argued that all the parts of his property were legalised by the former owner of the dwelling, while for the terrace he had the consent from his neighbours to use it. (EURACTIV’s partner Dnevnik.bg)

Rogue candidate for EU elections: The Bulgarian Movement of Rights and Freedoms party (DPS) has put second on its list Delyan Peevski, a shady media magnate, in spite of criticism, both at home and in Brussels. Peevski is a member of parliament from DPS, a political party representing the Turkish minority in Bulgaria affiliated with liberal group ALDE. Peevski’s name was mentioned as one of the causes of the bad ranking of Bulgaria in the very recent World Press Freedom index of Reporters without Borders.  At the last European elections, ALDE distanced itself from Peevski. EURACTIV asked ALDE to react on Monday but received no answer by the time of this publication. (Georgi Gotev, EURACTIV.com)

HDZ clear winner of EU elections: A Croatian national television poll has shown that HDZ (EPP) will be the winner of the EU elections with five MEPs, followed by the socialist SDP, which will get three seats, while Human Shield (coalition with Italy’s Five Star Movement), the Amsterdam coalition (ALDE) and Most (right wing, possible member of a faction led by Italian deputy prime minister Matteo Salvini) will get one MEP each.

Plastics out: Hotel Adriatic, in the city of Rovinj in Istria, a flagship of Croatian tourism, has decided to stick to the spirit of a new EU directive and eject all single-use plastics and replace them with disposable alternatives. Adriatic is the first hotel in Croatia implementing the new rules, two years before the deadline. (Željko Trkanjec, EURACTIV.hr)

Strong party network key for victory: Slovenian political analysts have suggested that voter mobilisation will be a key factor to win the next EU elections. This practically means that established parties, with strong networks across the country, will get most seats, mainly SDS and SLS, both members of the EPP. The governing LMŠ (ALDE) is a new party, which will serve as a handicap. (Željko Trkanjec, EURACTIV.hr)

Kosovo citizens return from Syria: The Kosovo administration repatriated 110 citizens from Syria, four fighters, 32 women and 74 children. A Priština court detained the four suspected terrorists on 21 April, while the others were provided assistance and are currently at an asylum centre on the outskirts of the capital. Kosovo’s justice minister said it was “a very delicate and importation operation, carried out with US assistance”. (Beta-EURACTIV.rs)