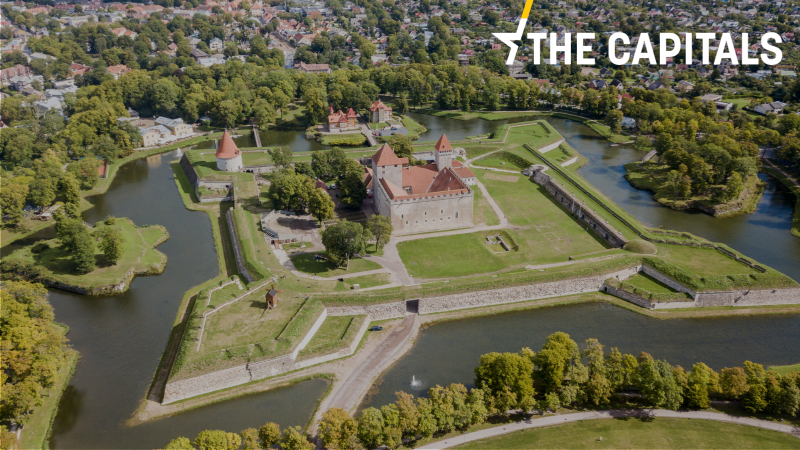 Before you start reading today’s edition of the Capitals, feel free to have a look at the article European Commission reopens gene editing’s box amid sustainability claims, by Natasha Foote and Gerardo Fortuna.

Also feel free to have a look at the article European Parliament backs EU’s €7.9 billion defence fund, by Alexandra Brzozowski.

The Estonian island of Saaremaa plans to unveil a monument to mark the island as the “geographic centre of Europe”, along with at least five Central and Eastern European countries Lithuania, Ukraine, Slovakia, Belarus, and Poland which lay claim to the continent’s geographic midpoint. Read more.

Germany says new EU COVID-19 vaccine contracts have clear rules on delivery shortfalls. The EU’s contracts for COVID-19 vaccines to be delivered in 2022/23 contain clear rules on what would happen if the vaccine makers do not deliver, Germany’s Health Minister Jens Spahn said on Thursday, signalling the bloc had learned its lesson after troubles with AstraZeneca.

The European Commission has launched legal proceedings against the Anglo-Swedish firm for not respecting its contract for the supply of COVID-19 vaccines, and for not having a “reliable” plan to ensure timely deliveries. (EURACTIV.de)

In other news, French President Emmanuel Macron charts four-stage plan to ease COVID-19 restrictions, announcing four major dates for the lifting of restrictions in France. As a first step, the ban on travelling more than 10 kilometres from one’s place of residence will be lifted on 3 May. On 19 May, the curfew will start at 9 pm instead of the current 7 pm, and terraces of restaurants, museums, theatres, cinemas and non-essential shops will open again, the president told regional newspapers on Thursday.

The start of curfew will again be pushed back to 11 pm on 9 June, when sports centres, indoor restaurants and bars will be allowed to open again. (Clara Bauer-Babef | EURACTIV.fr)

UK cod-out after Norway talks collapse. Talks between the UK and Norway on a new fishing agreement collapsed on Thursday, with ministers claiming that the Oslo government had rejected a “fair offer”. Read more.

In other news, EU ministers agreed their position on a four-year Brexit Adjustment Reserve worth €5 billion on Thursday, designed to help businesses cover losses and the additional costs imposed under the new post-Brexit trade agreement. Read the full story.

Sinn Fein’s controversial voter database taken offline again. Irish republican and socialist democratic party, Sinn Fein, has taken its voter database offline for the second time after having shut the original portal for the system after details of its existence were published by an Irish newspaper. Read more.

Helsinki-Tallinn railway tunnel to strengthen transport cooperation. Finland and Estonia’s aim to improve infrastructure and connections both inside the region and to destinations in Central Europe took a significant step forward on Monday with the signing of a new memorandum proposing a railway tunnel between Helsinki and Tallinn. Read more.

Italian recovery plan to be submitted to EU Commission. Italy’s recovery plan received its final approval from the Council of Ministers Thursday and will be submitted to the European Commission on Friday, in line with the deadline set by the EU executive. Alongside the €220 billion plan financed by the Next Generation EU funds, a complementary fund worth €30.6 billion for infrastructure was also approved.

“We are among the first countries to submit the national recovery plan to the Commission. There are more than €220 billion in play that will be used to invest in skills, create jobs and start big projects in line with green transition and digitalisation objectives”, said Foreign Minister Luigi Di Maio. “Around €100 billion will be destined to the South of Italy, to ensure all Italians have the same opportunities”, he added.  (Alessandro Follis | EURACTIV.it)

Spanish unemployment rate drops to 16%. Spain lost 137,500 jobs in the first quarter of the year, according to a recent survey published by Spain’s National Statistical Institute (INE). Despite this, both the number of unemployed and the unemployment rate has decreased. Read the full story.

‘No common ground’ in Cyprus talks in Geneva. No common ground was found to restart the negotiations on the Cyprus issue, after an unofficial five-way meeting held in Geneva which ended in deadlock after three days of talks, the UN announced on Thursday. Read more.

Polish recovery plan sent to Brussels, despite divided opinions. Poland will submit its national recovery plan to the European Commission on Friday despite the document still dividing the Polish political scene. Read more.

EU Parliament supports Czechia, calls on EU to expel Russian diplomats. The European Parliament passed a resolution on Thursday calling on EU countries to coordinate the expulsion of Russian diplomats in reaction to the 2014 Vrbetice ammunition depot explosion in the Czech Republic. Read more.

Bratislava port to get its own €40 million LNG terminal. Slovakia is to get a new Liquefied Natural Gas (LNG) terminal worth €40 million aimed at reducing greenhouse gas emissions and pollutants in inland waterway transport on the Danube river, the state-owned investor Public Ports company has said. Read more.

Hungarian FM to Blinken: Orbán is a ‘fighter for democracy’. The US government does not need to fear for democracy in Hungary, the country’s foreign affairs and trade minister Péter Szijjártó told RTL on Thursday (30 April) in reaction to US Secretary of State Antony Blinken’s comments on the deterioration of press freedom in the country, Telex reported. Read more.

Bulgarian Socialists to receive mandate to form a government. Bulgarian President Rumen Radev will give the mandate for the formation of the government to the Bulgarian socialists on Saturday (1 May), his office announced on Thursday. The two previous attempts to form a cabinet following the 4 April general elections failed. Read more.

Croatian government to implement recovery plan. “The national recovery and resilience plan is important for developing resilience to crises such as the COVID-19 pandemic, and the government will implement it relying on its experience and political will,” Croatian Prime Minister Andrej Plenković told reporters on Thursday. Read more.

In other news, most Croatian banks still do not consider climate change to be a serious threat to their business, a survey carried out by the Croatian National Bank (HNB) showed on Thursday. The survey was presented as part of an online conference called “The Role of Banks in Greening Our Economies”, organised by the HNB and the European Bank for Reconstruction and Development (EBRD).

According to the survey, only two banks have a climate change-related strategy included in their overall business strategy, expressing concern about risks and anticipating possible changes to the regulatory framework. However, 15 banks said they were waiting for the regulators to take initial steps.  (Željko Trkanjec | EURACTIV.hr)

Vaccinated Serbian, Hungarian, citizens allowed to cross border without quarantine, testing. Serbian Foreign Minister Nikola Selaković and his Hungarian counterpart, Péter Szijjártó on Thursday agreed to accept and recognise all vaccine certificates, regardless of which vaccine was received. Read more.

Russian Embassy in BiH: Washington blames us for everything. The  Russian Embassy in Bosnia and Herzegovina said on Thursday it closely followed the statements by US ambassador Eric Nelson and special envoy for the Western Balkans Matthew Palmer who, according to the embassy, blamed Russia for all the troubles BiH has and for undermining the stability of BiH and the whole region, N1 reported. Read more.

Montenego wants to keep ‘investment, economic relations with Eurasia’. “We see ourselves as part of the EU, and we have investment and economic relations with Eurasia, which we want to keep,” Montenegrin Finance Minister Milojko Spajić has told EURACTIV’s partner Croatian daily Jutarnji list, adding that the country’s exposure to Chinese investments is somewhat less pronounced than in Serbia. Read more.

In other news, Prime Minister Zdravko Krivokapic said his government will form a commission to negotiate on the long-running maritime dispute with Croatia over the Prevlaka peninsula near Dubrovnik, Balkan Insight reported.

“The intention of this government is to form a commission that, in agreement with the Croatian side, will try to solve a very complex problem. We need to resolve this because of EU integration because they will not tolerate unresolved bilateral issues in the accession process,” Krivokapić told parliament. “I hope this commission will help resolve this problem,” he added. (Željko Trkanjec | EURACTIV.hr)

Netflix recognises Kosovo, media sees it as sign of recognition. Online streaming platform Netflix has added Kosovo to its list of countries when people sign up, something local media has characterised as recognition of the state of Kosovo. Read more.