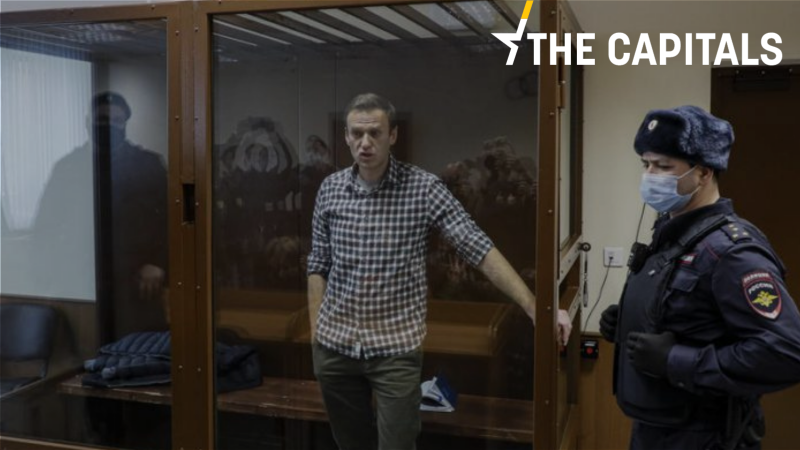 Before you start reading today’s edition of the Capitals, feel free to have a look at the article EU action awaited as phantom paper further unhinges Western Balkans, by Alexandra Brzozowski and Vlagyiszlav Makszimow.

Also feel free to have a look at the article Health expert: Routine immunisation should not be put on back-burner due to COVID, by Gerardo Fortuna.

The anti-corruption campaigner, who is on hunger strike and whose allies say his life is in danger, is being treated at a prison hospital about 180km east of Moscow, amid reports of mistreatment and deteriorating health. Read more.

Portuguese presidency to give MEPs a new eco-scheme offer in CAP talks. The Portuguese presidency of the EU Council aims to meet the European Parliament halfway by increasing up to 25% the eco-scheme ring-fencing, in a bid to break the deadlock on the green architecture of the Common Agriculture Policy (CAP) reform. Read the full story.

Merkel open to EU treaty change to boost health powers. German Chancellor Angela Merkel said on Wednesday that the EU needs more power to coordinate the bloc’s response to health crises such as the coronavirus pandemic, and did not rule out a treaty change to secure them. Read more.

In other news, Germany’s top court declined to block the EU’s COVID-19 recovery fund on Wednesday, removing one of the last major hurdles before the bloc can launch its 750 billion debt-financed fund. Read more.

In other news, France will not extend lockdown beyond 3 May. Current travel restrictions, which include an inter-regional travel ban and the ban on travel beyond 10km from one’s home, will be lifted, French government spokesperson Gabriel Attal confirmed on Wednesday, meaning travel certificates will no longer be necessary from that date. However, the night curfew will remain in place across the country. (Magdalena Pistorius | EURACTIV.fr)

Brussels says Lithuania should lift working age to 72. Lithuania will have to increase its maximum working age to 72 if it wants to maintain its current age dependency ratio – the ratio between the number of working-age people and the population of seniors they need to support – a recent European Commission paper shows. Read more.

Stonewalled by Minsk, US ambassador to Belarus will reside in Vilnius. US Ambassador to Belarus Julie Fisher will temporarily reside in Vilnius as she does not have a visa to travel to Minsk, Lithuanian Deputy Foreign Minister Mantas Adomėnas said on Wednesday. Washington has formally asked the Lithuanian government to accredit the ambassador to Lithuania, Adomėnas told the Baltic News Service (BNS), adding that “the government has yet to formulate its formal consent” to the US request received on Monday.

Belarus Foreign Minister Vladimir Makei said on Wednesday that Minsk is ready to receive the US ambassador “at any time”, but Belarus wanted “to see a clear and understandable prospect of further interaction with our US partners in all areas”.(Baltic News Service / LRT.lt)

In other news, cracks in Italy’s new government are already showing as the right-wing Northern League abstained from voting on the new anti-coronavirus decree approved by the government and by Salvini’s party on Wednesday.

According to party sources, Salvini is not in favour of maintaining the 10pm curfew or imposing restrictions on indoor venues. Prime Minister Mario Draghi is apparently amazed and “struggling to understand” Salvini’s choice, the Adnkronos press agency reported. (Daniele Lettig | EURACTIV.it)

Greece reopens restaurants and cafés in early May. After the Greek hospitality sector was closed for almost 6 months, the government plans to reopen cafés and restaurants at the beginning of May to gradually return to normality. Read more.

Poland to partially relax COVID-19 restrictions. Poland will start loosening virus restrictions from next Monday as schools will reopen for some pupils, along with hairdressers, manicure and beauty salons, Health Minister Adam Niedzielski said. The government will present a road map next week for reopening hospitality, including restaurants, bars, hotels and cultural venues. (Anna Wolska | EURACTIV.pl)

European Parliament group leaders express solidarity with Czech Republic after escalations with Russia. EU countries will have to give a clear and joint response to the 2014 explosion in the ammunition depot in the Czech municipality of Vrbetice, in which Russia’s GRU military intelligence service is suspected to have been involved, leaders of the main European Parliament political parties wrote on Wednesday. Read more.

More than 20,000 sign petition to support Slovakian farmers. More than 20,000 people signed a Slovak petition calling for the “greening” of the agriculture sector, which was delivered to Agriculture Minister Ján Mičovský on Wednesday. The petition organised by environmental group SOS/Birdlife Slovakia calls for more support for farmers in transitioning towards more sustainable use of fields, meadows and forests. Read more.

The emergency was last extended on 22 February. The opposition then accused the government of abusing its authority, while the ruling parties shot back by saying they cannot rely on the left for pandemic management. (Vlagyiszlav Makszimov, EURACTIV.com)

Romania ready to step up vaccination rate as interest fades. Romania is close to reaching a vaccination capacity of 100,000 people per day, as it launched the first mobile vaccination units on Wednesday with the aim to reduce waiting times. Read more.

Croatian opposition urges health minister Beroš to resign. “There is a consensus among the opposition that Health Minister Vili Beroš has to go,” SDP leader Peđa Grbin said after a meeting of opposition parties. Read more.

Serbia supports Iran nuclear deal, says foreign minister. Relations between Serbia and Iran have reached a high level of development, and Serbia supports the Iran nuclear agreement, an embattled deal between Iran and several world powers, Serbian Foreign Minister Nikola Selaković has said, adding that he hopes that an agreement could be found “as soon as possible”.

“Serbia and Iran are two friendly states that have developed a very good political relationship, providing political support to each other in international organisations,” Selaković said, adding that Serbia was proud to say that it was one of the few countries to have good relations with all the states of the Persian Gulf. (EURACTIV.rs | betabriefing.com)

New migrant camp in BiH should be ready in three months. A permanent migrant camp in Lipa village near the northern town of Bihać should be completed in the next three months, Bosnia and Herzegovina’s Security Minister Selmo Cikotić said on Wednesday, news agency Hina reported. Read more.

US embassy: No entity has a future outside BiH. The US embassy in Sarajevo has responded to reports of a “phantom” non-paper suggesting a change of borders in the Western Balkans. “The citizens of BiH deserve more from their leaders than disruptive action with the aim of diverting attention from initiating primary economic and electoral reforms, and reforms in the field of rule of law with which will help this country will move forward,” it said. “The inflammatory rhetoric that speaks of war, secessionism and BiH is dangerous, irresponsible and unacceptable,” the statement read, as reported by Avaz news portal.

As for the status of BiH as a state, it is not opinions that count, but international law. The territorial integrity and sovereignty of BiH are guaranteed by the Dayton Peace Agreement, the statement said, reiterating the US position on the agreement. “We are committed to the principles of Dayton – Bosnia and Herzegovina is a democratic, multiethnic, sovereign and independent state with unquestionable territorial integrity,” it said.(Željko Trkanjec | EURACTIV.hr)

Another shooting during Albania’s general election campaign, killing one. One man was killed and four others wounded in Elbasan, 35km south of Tirana, on Wednesday, four days ahead of the 25 April general elections in Albania. Read more.

In other news, the Turkey-Albania Fier Regional Hospital, built by Turkey, opened on Wednesday. Construction started in January after a visit to Turkey by Albanian Prime Minister Edi Rama, based on the promise of Turkey’s President Recep Tayyip Erdoğan.

Turkey also began the construction of 522 residences in the Albanian town of Lac in December 2020 for people who lost their homes in two earthquakes in 2019, Turkish Daily Sabah reported.

Erdoğan stressed the friendly relations between the two countries. “We strive for peace, tranquility, stability and development of all the Balkans, especially Albania,” he said. (Željko Trkanjec | EURACTIV.hr)