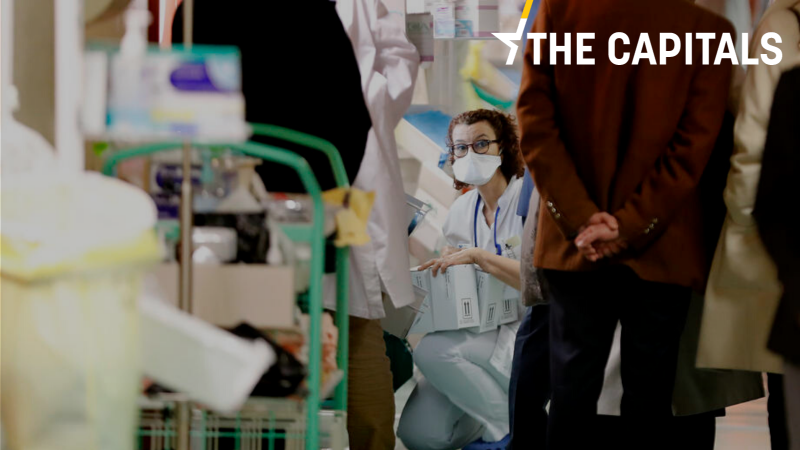 Before you start reading today’s edition of the Capitals, feel free to have a look at an appeal from a number of prominent figures calling for a “European response” to the coronavirus threat.

****To stay up-to-date on everything to do with the coronavirus across the capitals, feel free to check out EURACTIV’s comprehensive overview, which is regularly updated with the help of our network of offices and media partners.

The very latest updates from the Capitals

“Essential medical goods can only be exported to non-EU countries with the explicit authorisation of member states’ governments. This is the right thing to do because we need the equipment for our healthcare systems,” von der Leyen said, adding that they must be safeguarded with protective equipment such as masks and gloves.

EU sources told EURACTIV last week that 60% of protective equipment’s global production takes place in China’s Wuhan region, where the coronavirus was first reported. The factories in the region are expected to go back to business in a few months and considering that the outbreak in Europe is escalating severely, the bloc cannot wait.

In Germany, Chancellor Angela Merkel and Interior Minister Horst Seehofer announced before the Bundestag yesterday (15 March) that Germany would be closing its borders as of 8 am today (16 March) with France, Switzerland, Luxembourg, Denmark, and Austria to impede the spread of the coronavirus. EURACTIV’s Sarah Lawton has more.

To find out more about how Germany is dealing with the COVID-19 crisis, click here.

In other news, reports surfaced over the weekend that US President Donald Trump had shown interest in buying CureVac, a private company based in the southwestern town of Tübingen that is currently working on creating a coronavirus vaccine. EURACTIV’s Sarah Lawton reports from Berlin.

In France, politicians wondered if the second round of municipal elections should be held next Sunday as France reached 5,423 cases (900 more than the day before) and 127 deaths. Georgi Gotev has the story.

Meanwhile, in Belgium, the coronavirus pandemic has lead to a small political breakthrough on Sunday (15 March), as the main political parties agreed to grant the current caretaker government under Prime Minister Sophie Wilmes special powers for the next six months to bridge the crisis. Alexandra Brzozowski has the latest developments. (Alexandra Brzozowski | EURACTIV.com)

In Austria, the parliament unanimously passed strong measures against the coronavirus, with the reported cases having risen above 870 and two deaths as of 8 pm on Sunday (15 March). While there will be fines of €2,180 for gatherings of more than five people, all shops, restaurants and bars will be closed except for crucial infrastructures such as grocery stores, pharmacies and banks. Citizens have also been asked to leave their homes only if absolutely necessary and to exclusively stay in the company of people they live with, except for buying groceries. (Philipp Grüll | EURACTIV.de)

In Spain, the country has declared an absolute quarantine as of Sunday (15 March) allowing only trips to buy food, medicines or essential products, Prime Minister Pedro Sánchez announced in a television appearance on Sunday (15 March) as the number of coronavirus cases exceeded 7,700 with 288 deaths. EURACTIV’s partner EUROEFE has the story.

In London, Boris Johnson’s government will from Monday (16 March) give daily televised press conferences to update the public on the fight against coronavirus, Downing Street has said. The move follows a wave of criticism of the government’s perceived passive approach to combating the coronavirus. Benjamin Fox reports from London.

In Ireland, all pubs and hotel bars in Ireland have been asked to shut their doors to the public until 29 March, as the government looks to stem the spread of COVID-19. The decision comes ahead of St Patrick’s Day, the country’s biggest festivity, which falls on Tuesday (17 March). EURACTIV’s Samuel Stolton looks at how this could look in practice.

Poland saw its coronavirus cases increase to 125, of which 13 people are considered to be recovered, while three have died. Over the weekend, Poland had closed its borders, banned public gatherings of over 50 people and closed shopping malls. Meanwhile, Health Minister Łukasz Szumowski’s public approval continues to grow as he has been ranked second in the monthly rankings of trust in Polish politicians, trailing only the president. (Łukasz Gadzała | EURACTIV.pl)

In Hungary, the human resources ministry ordered medical institutions to ban medical staff over 65 from interacting with patients, only allowing them to consult over the phone even with colleagues, according to a letter seen by Index. The news comes after the country had its first death linked to the COVID-19 virus, a 75-year-old man with underlying health conditions who died on Sunday (15 March). On Saturday (14 March), the government allowed the employment of retired medical professionals.

On Wednesday (11 March), the president of the Hungarian Medical Chamber, Gyula Kincses, warned that over 50% of the general practitioners in the country are above 60, meaning that implementing the order of the ministry could result in significant medical staff shortages. (Vlagyiszlav Makszimov | EURACTIV.com)

Romania installed a new government in a special Parliament meeting held on Saturday. With many of the ministers, including the Prime Minister, in self-isolation after coming in contact with a senator who tested positive for coronavirus, hearings were held via teleconferences, and MPs voted one by one in a special disinfected room and not in the plenary hall. EURACTIV Romania’s Bogdan Neagu has more.

In Sofia, as of Sunday (15 March), the number of people tested positive with coronavirus is 51, with two deaths so far. Following restrictive measures announced on 12 March, restaurants and bars are closed and the only shops open are those selling food and medicaments. The Ministry of Foreign Affairs advised Bulgarians not to travel abroad. Georgi Gotev has more.

In Athens, the government has imposed a Belgium-style lockdown as the number of coronavirus cases rose to 331 with four deaths. Greek authorities now focus on measures to avoid overcrowding in supermarkets. As of Monday, the rule will be to have one person per 10 square meters to make food purchases. Supermarkets will also have to offer delivery, even on Sundays. (Sarantis Michalopoulos)

Slovenia will shut down its air traffic from Tuesday in an attempt to reduce the spread of the coronavirus, a government spokesman told reporters on Sunday (15 March). Read more.

In Kosovo, the mayor of Malisevo, a town in central Kosovo that has been placed under quarantine after a 37-year old woman tested positive for coronavirus on Saturday, has appealed to the authorities in the capital Pristina to help, Serbian news agency Tanjug reported. Mayor Regip Begaj is worried because the town does not have enough doctors or medical equipment and cannot cope with the situation on its own, Tanjug said. (Zoran Radosavljevic | EURACTIV.com)

In other news from the Capitals

Agreement on the new government. After only 13 days, the leaders of future government coalition parties reached a deal on Friday (13 March). The parties of Ordinary People’s (OĽaNO), We Are Family (Sme rodina), Freedom and Solidarity (SaS) and For People (Za ľudí) had all agreed on the distribution of posts in the cabinet at a ratio of 8:3:3:2. EURACTIV  Slovakia’s Zuzana Gabrižová has the details.

Business as usual. In the middle of the coronavirus crisis, the Czech government included in its Monday agenda a law on beneficial owners’ evidence, a proposal which would help  Czech Prime Minister Andrej Babiš to solve his alleged conflict of interests. Babiš says the government only wants to catch up with the EU’s anti-money laundering directive. EURACTIV.cz’s Aneta Zachová looks into this.

Massive victory for Plenković. Croatian PM and ruling party president Andrej Plenković has officially won the inter-party elections that were held, despite the COVID-19 outbreak which is paralysing the rest of Europe. EURACTIV’s Tea Trubić Macan reports.

The two officials also discussed the migrant crisis and the European integration of Serbia.  According to a press statement by the Serbian president’s press office, the relations and economic cooperation are excellent, with a tendency of further intensive development in all sectors. Vucic thanked the Hungarian official for “exceptional cooperation and support he provides to Serbia in all spheres of social life.” Read more.