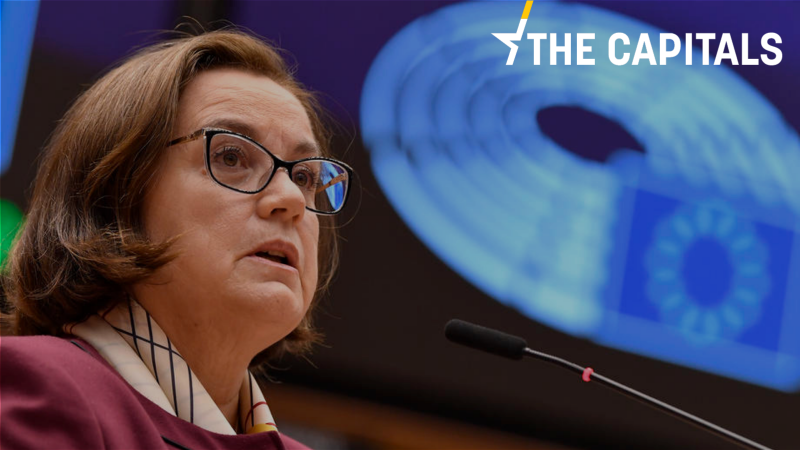 “We will take stock of what is happening in Hungary and Poland, but as we have two processes in parallel, we will never find unanimity to come out of this,” she said, acknowledging that the EU is in a “very complicated situation”. [EPA/EFE-JOHN THYS]

Before you start reading today’s edition of the Capitals, feel free to have a look at the article “EPP silent over Orbàn’s flirt with nationalist Brothers of Italy“.

The Portuguese secretary of state for European affairs has acknowledged that Portugal’s EU presidency will face difficulties in applying sanctions to Hungary and Poland for violations of the rule of law.

Ana Paula Zacarias said Portugal has scheduled a debate on Article 7 concerning Poland and Hungary for the General Affairs Council in May to examine the situation in both countries in terms of the rule of law. Read more

Portugal pushes for EU meeting with Biden before July. Portugal’s EU Presidency is working to have a meeting with the US President during the first half of the year, the secretary of state for European affairs has said. Read more from Lusa.

Citizen’s climate convention does not go easy on Macron government. The French government led by President Emmanuel Macron did not perform well in “implementing” any of the six main topics – housing, transport, food, consumption of natural resources, production, and work – on which the citizen’s climate convention worked, according to the 150 randomly picked members from the public who met on Sunday.

While none of the six topics received an above-average grade, the government received 6.1 out of 10 for proposing a referendum on whether to add the fight against climate change to Article 1 of the Constitution. “The 150 citizens punish very strongly (and very logically) the executive’s inaction and lack of ambition,” said National Assembly MP Matthieu Orphelin, formerly with En Marche. (Mathieu Pollet | EURACTIV.fr)

Belgium may re-assess vaccination strategy on Wednesday. According to Belgium’s health minister Frank Vandenbroucke the discussion among health ministers would circle around three questions: Whether in the case of the Pfizer-BioNTech vaccine, there could be 42 instead of 21 days between the first and second injection, whether AstraZeneca could be used in people over 55 or 65 and whether one shot from Pfizer-BioNTech, Moderna or AstraZeneca could be sufficient instead of two injections.

Residents who fail to show up for vaccination get second chance. Luxembourg, which has a low and below-EU-average vaccination rate, will give the many residents who have failed to show up to receive the coronavirus vaccine, a second chance at obtaining it. Given that only half the people showed up to their appointments at vaccination centres, as the Luxembourg Times reported last week, the country is hoping this approach will speed up its inoculation campaign. (Anne Damiani | EURACTIV.fr)

Ireland’s Social Democrats call for new COVID-19 targets. The Irish government should attempt to meet new coronavirus targets of 10 cases per day, the Social Democrats have said. Such a benchmark would help the country avoid a further lockdown in the near future, according to co-leader Róisín Shortall. Read more.

Lawmakers are frantically lobbying Chancellor Rishi Sunak ahead of Wednesday’s (3 March) Budget. While Sunak is likely to maintain support packages for businesses and the self employed, as well as extending the furlough scheme for several more months, he is set to unveil a raft of hikes to corporation tax and income tax in a bid to close the huge 15% budget deficit that the UK ran in 2020.

On Monday, a group of 45 Conservative MPs from northern England called for business rates to be cut in order to protect shops and other businesses that have lost huge amounts of revenue because of the coronavirus pandemic.(Benjamin Fox)

Finland enters partial three-week shutdown. Finland will go into a partial three-week shutdown from 8 March as the country’s coronavirus situation has been deteriorating since Christmas, the Finnish government has announced. According to Interior Minister Maria Ohisalo, this will be the “final spurt to accelerate toward brighter times.” Read more.

‘COVID-19 passport’ could widen ‘social gap’ between rich and poor states. The president of the Spanish Association of Vaccinology (AEV), Amos Garcia, firmly opposes a European (and international) “COVID-19 transport passport” that would grant travel privileges to those vaccinated because it could widen the already existing “social gap” between rich and poor countries in Europe and worldwide. Read the full story.

Sardinia region to relax measures as infection numbers drop. Sardinia will be the first Italian region as of Monday to be classified a “white zone” in the Italian scheme of restrictions against COVID-19 given its ‘low’ 29 COVID-19 infections per 100,000 inhabitants recorded in recent weeks, meaning it will relax many of its measures.

While bars and restaurants will be able to remain open past the previous 6pm limit, and cinemas, theatres, and museums will also be able to reopen, people will have to continue wearing masks, respect social distancing, and sanitise areas. The Italian government has also drawn up a new plan to accelerate the administration of vaccines from the current 100,000 to 600,000 a day by the end of March by involving civil protection volunteers.

In other news, former Prime Minister Matteo Renzi has refused to explain his relations with Saudi Prince Mohamed Bin Salman in a press conference, despite having previously said he would. Rather, Renzi interviewed himself in a newsletter, where he said his relations with the Saudi regime are “perfectly legal and legitimate” and that “Saudi Arabia is a bulwark against Islamic extremism and has been a major ally of Western countries for decades”. (Daniele Lettig | EURACTIV.it)

Poland presents national recovery plan. Polish Prime Minister Mateusz Morawiecki on Friday presented the country’s National Recovery Plan (KPO), the budget of which will be based on Poland’s share of the EU’s €750 billion post-pandemic recovery fund. With the plan only having a few weeks left before being sent to Brussels, stakeholders have little time to make suggestions on the plan’s content. Read more.

In other news, the Czech Republic has filed a lawsuit against Poland at the Court of Justice of the European Union, saying on Friday it had violated the bloc’s law with the expansion of mining at the Turow lignite mine. According to Reuters, the country had said on Monday it would sue its neighbour over the mine that sits near the Czech and German borders and which it says was damaging communities on the Czech side.

The Czech Environment Ministry said the country would continue talks with Poland but called mining there illegal. “Even today its continuation is damaging our citizens, our water, our environment,” the ministry said.

Bulgaria misses start of NATO naval exercise due to COVID-19. Bulgaria will miss the start of Poseidon 21, the first NATO multinational naval exercise of 2021, after a group of its sailors were infected with the coronavirus. Read more.

Budget debates. The Parliament will on Monday debate in plenary the budget for 2021, with a final vote scheduled for Tuesday. Last week, the parliamentary committees debated the budget and adopted it in the form proposed by the government, rejecting all amendments. Prime minister Florin Citu said he would prefer that the Parliament adopts the budget in the government-proposed form, and coalition MPs abandoned their plans to file amendments. The government estimates 4.3% economic growth for this year, with a deficit of 7.16% of GDP. (Bogdan Neagu | EURACTIV.ro)

Zagreb mayor’s death has political consequences at national level. The sudden death of Milan Bandić, Zagreb’s Mayor for an uninterrupted 20 years and a controversial figure, is likely to have quite an impact on the country’s politics and has thrown the mayoral race in this spring’s local elections wide open. Read more.

More than 800 businesspeople enter Serbia without PCR test. 830 business people and nearly 550 local and international companies have used Serbia’s simplified entry procedure that allows them to enter the country without a PCR test, the Serbian Chamber of Commerce announced on Saturday. Read more.

Kosovo authorities accuse Russia of trying to prevent Belgrade-Priština deal. Russia was interfering in the region in bad faith and striving to avert a deal since the very beginning of the Belgrade-Priština dialogue, Kosovo’s foreign ministry said on Sunday. Read more.

BiH’s RS entity to receive 20,000 Sputnik V vaccines on Monday. A total of 20,000 Russian Sputnik V coronavirus vaccines will arrive at BiH’s Republika Srpska (RS) entity on Monday. RS authorities have announced that the shipment will arrive at 11 am in Banja Luka, the entity’s administrative centre.

These doses are intended to continue the immunisation of priority groups following RS’ COVID-19 vaccination plan. So far, 2,000 doses for 1,000 people have arrived in the RS, and another 400,000 doses of the Russian Sputnik V have been ordered. The first vaccine doses in this BiH entity were received on 12 February by employees of COVID-19 departments at the University Clinical Centre of RS in Banja Luka. (Željko Trkanjec | EURACTIV.hr)