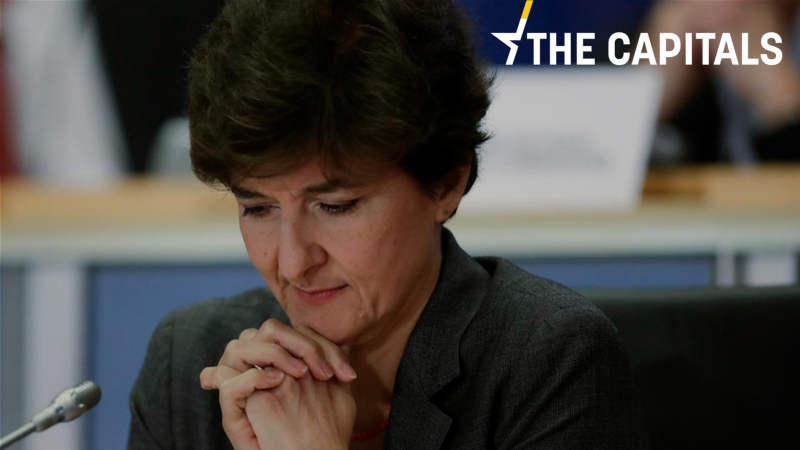 French President Emmanuel Macron hit at Ursula von der Leyen, claiming that the President of the European Commission had guaranteed the support of the main political groups. [EPA/OLIVIER HOSLET]

Before you start reading The Capitals today, take a look at a story by EURACTIV’s agriculture reporter Gerardo Fortuna on a multi-stakeholder group in the livestock food chain, which started putting up banners across metro stations in Brussels as part of a broader campaign that aimed to discuss animal farming from another angle. See the full story here.

The Goulard affair caused a political earthquake. The mistrust towards France due to the rejection of candidate Sylvie Goulard on 10 October has been politically-damaging. French President Emmanuel Macron hit at Ursula von der Leyen, claiming that the European Commission President-elect had guaranteed that the French candidate would obtain the support of the main political groups despite legal proceedings. However, the chairmen of the Socialists and Democrats (S&D) and the European People’s Party (EPP) groups in the European Parliament denied that they had been consulted on the issue. The French government, which must now nominate a new candidate, refuses to reconsider the scope of the portfolio granted to France.

“This is what’s happening when you have too much”, German MEP Jens Geier (S&D/SPD) said, calling for a reduction of the portfolio’s scope.

“You can’t resign on one side in France for something for which you had to pay back €45,000 to the European Parliament, and on the other side want to become EU Commissioner,” said the conservative German MEP, Christian Ehler (EPP/CDU).

Aline Robert, EURACTIV.fr Editor-in-Chief, wrote that EPP leader Manfred Weber, who had bid for and failed to get the Commission President job after the European elections, should have been the one to set up a team of Commissioners. This is something all German MEPs, including the Greens, supported. “The conservatives showed the most animosity, even aggressiveness towards the French candidate, even though on substance, the group was very close to the candidate,” she wrote. Read the story: Why the European Parliament rejected Sylvie Goulard

The EPP tweeted, and then deleted, a message that was supposed to be kept internal, which read “Guys, we are going to kill her in the vote later but do not say until then”. The communication blunder demonstrates Goulard’s uphill-battle with the EPP group.

This turn of events is expected to heat the debate at the European Council next week. With a Romanian, Hungarian and French Commissioner still missing from von der Leyen’s team, it appears unclear when the next European Commission will start getting to work.

Maroto reminded Malmström about the “difficult situation” of the steel industry, both in Spain and the EU. Madrid also asked the new Trade Commissioner, Phil Hogan, to review the so-called “safeguard measures” (limits) on steel imports in the EU.

“Steel businesses in the EU find themselves in a difficult situation, and are even considering to close some production lines and factories, due to low demand and competition from imports”, Maroto said, without explicitly referring to China. China accounts for more than half of steel production worldwide and exports at prices that make it very difficult for European producers to compete, according to Spanish official sources quoted by EFE. (Fernando Heller EuroEFE.EURATIV.es)

Greece attacks Turkey over Syria. Following a meeting with NATO Secretary-General Jens Stoltenberg in Athens, Greek PM Kyriakos Mitsotakis said it was the obligation of the international community and NATO to exert all its influence towards a ceasefire in Syria to prevent escalation and new migration flows and avoid the further loss of lives, EURACTIV’s partner Athens-Macedonian News Agency reported.

Before, the ministry of foreign affairs issued a statement, saying the forced displacement of the population on Syrian territory and the use of violence to transform demographic data are “a direct violation of international law and bring to mind painful memories”.

Meanwhile, Czech PM Andrej Babiš has changed his mind regarding Turkey. He tweeted yesterday that the Czech Republic supports the EU’s position condemning Turkey’s military operation in Syria. But on 25 September, he met with Turkish, only in late September he met with Turkish President Recep Tayyip Erdoğan in New York during the 74th meeting of the UN General Assembly, and repeatedly praised the Turkish plan in Syria. The EU’s declaration on recent development in north-east Syria did not refer to the Kurds. (Ondřej Plevák|EURACTIV.cz)

Opposition against Orbán. Ahead of the local elections on Sunday, Hungary’s opposition parties are joining forces for the first time against conservative Prime Minister Viktor Orbán (EPP). The opposition’s plan is to come out victorious in Budapest and create an “Istanbul-style situation” (Turkish President Erdoğan lost the local elections in Istanbul, where he started his political career).

The Hungarian opposition believes that by standing behind a single candidate against the ruling party, they can eventually prepare for a strong offensive against the current prime minister in time for the 2022 parliamentary elections. However, according to some polls, over 75% of eligible voters from larger cities had heard about parties from the opposition cooperating, while only 35% of eligible voters from rural areas knew about these parties proposing joint candidates. And 62% had absolutely no idea who the opposition candidate in their town was. (Željko Trkanjec |EURACTIV.hr)

The latest conflict between Warsaw and Brussels concerns the new disciplinary regime for Polish judges, under which ordinary court judges can be subjected to disciplinary investigations, procedures and sanctions on the basis of the content of their rulings or decisions to request preliminary rulings from the Court of Justice of the EU. Read the story here.

Nearly 14,000 Bulgarians will lose their jobs if the EU’s Mobility Package is accepted without respecting Bulgaria’s position, Bulgarian Transport Minister Rosen Zhelyazkov told a press conference in Sofia with representatives of the transport business in the country. A study conducted by audit firm KPMG found that the Mobility Package in its current form is extremely damaging to the transport sector in the country and will reduce the turnover of the Bulgarian transport sector by over 100% over the next three years.

Companies owning almost 36% of Bulgarian trucks will either cease operations or register in Western Europe. If the package is accepted with a reasonable compromise, the sector should have a volume of nearly €4 billion in 2023, representing a 25% increase over the current size of the industry.

Land transport accounts for 6% of the Bulgarian economy, with a turnover of €2.8 billion last year. A total of 12,700 Bulgarian companies provide international land transport, and 3/4 of them operate up to five trucks, making them part of the small and medium-sized business. 42,500 people are employed, and the average gross salary of drivers is €1,750. This income is almost three times higher than the average gross salary in the country (650 euros).

Nearly 25,800 Bulgarian trucks operated in Europe in 2018 and their average age is three years. Bulgarian carriers operate with much newer equipment than the average in Europe, where the average age of the trucks is 11 years, the report noted. (Krassen Nikolov | EURACTIV.bg)

Days of consultations. After the parliament toppled the government in a no-confidence vote on Thursday (10 October), Romanian President Klaus Iohannis called the parties to hold consultations on Friday (11 October). All parliamentary parties are expected for 30-minute meetings with the president in a single day, a departure from the president’s usual style of holding one-hour meetings over two days. It seems Iohannis wants to speed up the process of installing a new government, although he said he would prefer early elections. However, early elections cannot be held earlier than March, as Romania will hold its presidential elections in November. The socialist government is now in caretaker mode, following the Parliament vote, and PM Viorica Dăncilă said she hopes the president will quickly appoint a new prime minister. (EURACTIV.ro)

Law on Foreigners against the Constitution. The Law on Foreign Citizens, which rejects refugees, is not in conformity with the country’s Constitution according to Slovenian media. The controversial provision, through which Slovenia would close the border for refugees and stop taking asylum applications, is being criticised. According to unofficial information, the Constitutional Judges repealed the article, which was challenged before the Constitutional Court by the Ombudsman’s office. (Željko Trkanjec |EURACTIV.hr)

European Blockchain Partnership. Croatia will sign a statement of cooperation establishing a European Blockchain Partnership, the government has decided. Minister of Economy, Entrepreneurship and Crafts Darko Horvat said blockchain technology is completely transparent and immune to manipulation and corruption, while it is also trustworthy and tested. He added that this technology applies to a broad range of industries – energy, health, security, finance, all data storage registers, etc. The minister noted that 24 EU member states had signed the declaration, which creates an international space for research and development of that technology and unlocks funds worth €300 million, which will be made available to EU member states. Horvat presented the example of Slovenia, which created 13,000 jobs directly or indirectly connected to developing blockchain technology and related projects. (Željko Trkanjec |EURACTIV.hr)

The US wants Serbia and Kosovo closer. Special Presidential Envoy for Serbia and Kosovo Peace Negotiations Richard Grennel said in Belgrade that the Trump administration had a strong belief that economic growth, new job creation and increased commerce opportunities represented a key part of ensuring lasting peace. “The goal is to bring our partners in Serbia and Kosovo together for a comprehensive solution to resolve points of conflict in the region. Both sides will need to work closely and quickly, with an eye toward the future,” Grennel said.

Balkan’s ‘Small Schengen’.Serbian President Aleksandar Vucic said on 10 October that the document on the so-called “small Schengen area”, which he signed with the prime ministers of Albania and North Macedonia, is based on the implementation of the free movement of goods, capital, persons and services as internationally accepted values that are also supported by the EU.

Specific measures will be decided at the next meeting, which will take place on 10 November in Ohrid, North Macedonia.

Montenegro, Bosnia and Herzegovina, and Kosovo are free to join the initiative.