EU centre-right under pressure to keep distance from Borissov 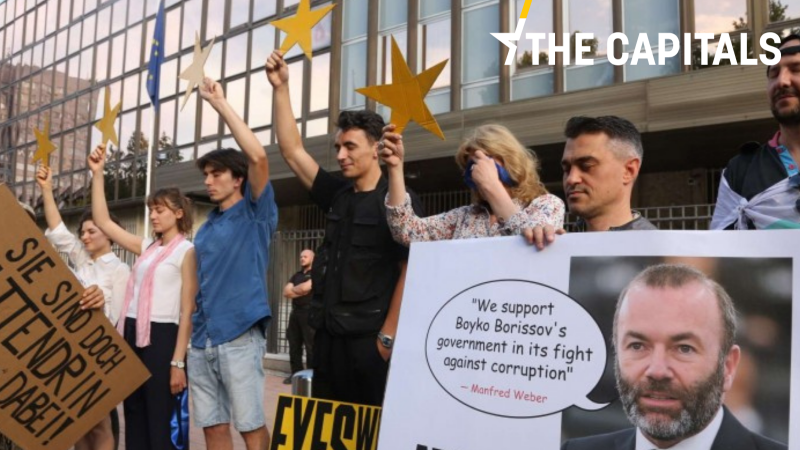 A bigger than usual demonstration is expected in Sofia on Thursday. Protesting Bulgarians criticize the EU for “keeping its eyes wide closed” for the extremely tense political situation in their country. [БГНЕС]

Before you start reading today’s edition of the Capitals, feel free to have a look at the article “Merkel dampens talk of halting Nord Stream 2, party sources say“.

Open letter to EPP. On the 62nd day of protests in Bulgaria, which aim to force the resignation of Prime Minister Boyko Borissov, pressure is mounting on the centre-right European People’s Party (EPP) to withdraw support for his GERB party.

MEP Radan Kanev from Democrats for Strong Bulgaria, a small Bulgarian centre-right force that is also EPP-affiliated, published an open letter to EPP party president Donald Tusk and EPP group chair Manfred Weber, in which he warns his European family that it risks losing the support of young Bulgarians, who massively stand against Borissov. Georgi Gotev has more.

Strasbourg plenary cancelled. Next week’s monthly meeting of MEPs will not be held in Strasbourg as planned but in Brussels, because of the ongoing coronavirus restrictions, European Parliament President David Sassoli confirmed on Tuesday (8 September). More here.

Fiscal stimulus until the pandemic is over. “There is a broad agreement not to withdraw the fiscal stimulus of the economy,” a senior EU official said yesterday (8 September) ahead of a Eurogroup meeting on Friday. Read more.

Russia claims Germany is ‘bluffing’ on Navalny findings. On Tuesday (8 September), Russia demanded a meeting with German ambassador to Moscow Géza Andreas von Geyr and accused the country of bluffing in response to Germany’s reaction to the poisoning of dissident Alexei Navalny.

At the meeting, which is scheduled for today (9 September), Moscow expects Germany to present its findings, which they claim is a political smear campaign. On Facebook, foreign ministry spokeswoman Maria Zakharova wrote that “it is time to reveal the cards, because it is clear to everyone: Berlin is bluffing to serve a dirty political posturing.”

Meanwhile, German Chancellor Angela Merkel announced a plan to support local and state health authorities to the tune of €4 billion, which will help finance 5,000 new jobs. These authorities “played a very important role in keeping the incidence of infection largely under control in Germany,” Merkel said in a virtual call on Tuesday (8 September). (Sarah Lawton | EURACTIV.de)

Macron wants to promote ‘equality of opportunity’. While visiting a high school in Auvergne on Tuesday (8 September), French President Emmanuel Macron announced that he wants to promote schemes that allow access to higher education for young people from underprivileged backgrounds, and increase the slots available under these schemes from 80,000 to 200,000.

“The republican promise is to give every young person the same chances of success, regardless of his or her place of birth, name or social background,” the president tweeted. (Anne Damiani | EURACTIV.FR)

Belgium’s government formation talks infected by COVID-19. Open Vld leader Egbert Lachaert, who is currently tasked with exploring options for a potential governing coalitions for a new federal government, has tested positive for COVID-19 and will go into a 14 day quarantine. This gives the country’s protracted government formation talks yet another headache. EURACTIV’s Alexandra Brzozowski has the details.

The software does not identify faces in real-time, but compares surveillance footage with photos of suspects already listed in the police’s database. So far, it has been used 581 times, and 83 suspects have been identified via the software, a ministry spokesperson has said.(Philipp Grüll | EURACTIV.de)

Finnish cheese is the hottest item on Russia’s black market. Finnish cheese, which has long been a must in the shopping baskets of Russian tourists, has now become the number one item of illegal trading due to COVID-19 restrictions prohibiting normal visits from across the border and EU sanctions prohibiting exports of the delicacy to Russia. EURACTIV’s Pekka Vänttinen looks into this somewhat unexpected phenomenon.

Lockdown measures to tighten again next week. Social gatherings of more than six people will be illegal in England from 14 September in the wake of a steep rise in coronavirus cases, the government announced on Tuesday (8 September). More here.

The new legal limit will apply both indoors or outdoors but exempt schools, workplaces or COVID-19 secure weddings, funerals and organised team sports. The government’s scientific advisors have been concerned by a rise in infection rates among young people. A total of 8,396 new cases have been reported since Sunday – with 2,460 reported on Tuesday. (Benjamin Fox | EURACTIV.com)

COVID-19 ‘burns’ Moria camp. Fire broke out at Greece’s overcrowded migrant camp of Moria on the island of Lesbos early on Wednesday, Reuters reported. According to Greek media, this occurred after 35 people were tested positive for COVID-19. Approximately 12,000 people have fled the camp. Read more.

Hungary’s economy among hardest hit. Hungary’s GDP contracted by 14.5% compared with the previous quarter – while EU member states saw an average 11.4% drop – marking the country as the third most economically impacted country in the EU after Spain and Croatia.

Unemployment rose by 5.3%, compared to the 2.7% EU average, with only Spain and Ireland presenting worse growth rates of employment in persons, according to the latest statistics released by Eurostat on Tuesday (8 September). (Vlagyiszlav Makszimov | EURACTIV.com)

Judge denies media reports on how Kuciak verdict was reached. Senate chair Ružena Sabová has denied media reports stating that the decision to acquit the alleged masterminds behind the double murder of journalist Ján Kuciak and his fiancee Martina Kušnírová had been made by two senate members, who outvoted her. Read more.

Further justice reforms planned. Poland’s Justice Ministry plans to cut the number of Supreme Court judges to 20-30 from the current 97 and merge some of the top court’s chambers, Rzeczpospolita said on Tuesday, as the ruling coalition pushes on with judiciary reforms. EURACTIV’s Alexandra Brzozowski has more.

Worrying situation. “The situation in the Czech Republic is concerning at the moment. Data shows elevated and growing levels of transmission across many regions and districts,” warned the Czech office of the World Health Organization (WHO). The number of reported cases has been rising steadily since the start of September with a new daily record reached on Tuesday (9 September) when 1,164 new coronavirus cases were confirmed.

Czech Prime Minister Andrej Babiš denied the warning of the WHO, instead suggesting the organisation “keep quiet”. Babiš continued with his criticism saying that the WHO “did not even know that there is a pandemic” and “had opposed face masks” in the beginning of the crises. He argued that the Czech Republic is managing the coronavirus outbreak very well because there is one of the lowest per capita death rates in Europe. (Aneta Zachová | EURACTIV.cz)

Calculated risk. Prime Minister Andrej Plenković said on Tuesday (8 September) that the intentional calculated risk in relaxing virus measures enabled the reactivation of the economy and that the policy of reopening the country was based on expert estimates. EURACTIV Croatia’s Željko Trkanjec has more.

Working on justice laws. Romania’s justice ministry will publish by the end of September several draft laws that aim to change the judiciary legislation, but only after ample debates with both domestic institutions and international partners, such as the Commission and the Council of Europe’s anti-corruption body, GRECO. Also, the ministry said it finalised other draft laws that address some of the issues raised by the Commission in its last CVM report. (Bogdan Neagu | EURACTIV.ro)

EU sets aside €2.4 million to assist Serbian media. The EU will disburse a total of €2.4 million in grants over the next three years to assist media outlets in Serbia in dealing with the consequences of the COVID-19 pandemic. More on this.

In other news, Moscow only subsequently learned about the details of Serbian President Aleksandar Vučić’s visit to Washington, which caused surprise among Russia’s leadership, Moscow daily Kommersant reported on 8 September.

“The signing of the item on Kosovo and Israel agreeing to mutually recognise each other in Vučić’s presence essentially legitimises Pristina’s aspiration to self-determination. The Russian authorities have, apparently, been warning the Serbian president of the consequences of certain items contained in the Washington agreement,” according to Kommersant. EURACTIV Serbia has the story.