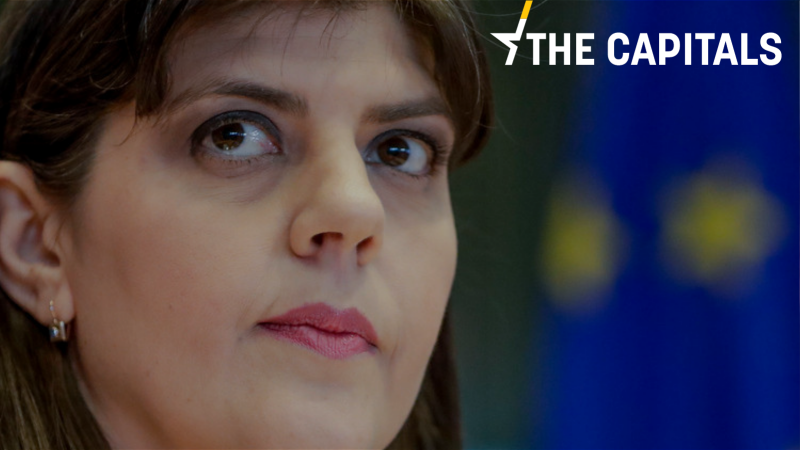 Kövesi has been highly praised among Bulgarians who are pushing for radical judicial reform and the resignation of current Bulgarian Chief Prosecutor Ivan Geshev. [EPA-EFE/STEPHANIE LECOCQ]

Before you start reading today’s edition of the Capitals, feel free to have a look at the article “EU not considering joining US in sanctioning Western Balkans“, by Vlagyiszlav Makszimov.

Also read an exclusive op-ed by European Commission Vice-President Frans Timmermans: “Belarus: a moment of truth for European values” and the story “EU Commission joins Czechia in legal case over Polish coal mine“, by Aneta Zachová.

European Chief Prosecutor Laura Kövesi arrives in Bulgaria on Thursday (10 June) for her first mission abroad since the European Public Prosecutor’s Office (EPPO) was launched at the start of the month. The visit is rather surprising, because no program has been announced. Read more.

EU-US summit hailed as ‘milestone’ in transatlantic relationship. The Portuguese presidency of the Council of the EU has highlighted the “symbolic importance” of next week’s summit between the European Union and the United States, which it believes has “the potential to be a key milestone” in renewing the transatlantic partnership. More.

German nuclear waste to remain in France after years of talks. Germany and France have agreed that 152 containers of nuclear waste from Germany are to be treated in La Hague in northwestern France, while only three to five containers will return to Germany as the country is contractually obligated to take back its nuclear waste reprocessed abroad. Read more.

Full time working from home restrictions ends in France. As French authorities lifted another block of restrictions on Wednesday, pushing curfew to 11 pm and allowing restaurants to reopen, remote working requirements will also be lifted progressively. The government was quick to remind employees that working from home still remains an efficient way to avoid COVID-19, but emphasised that strict sanitary rules still need to be imposed in offices. (Magdalena Pistorius | EURACTIV.fr)

Without the rules on the freezing and confiscation of proceeds of crime, EU and national law enforcement authorities are unable to stop the proceeds from crime from flowing into the legitimate economy, the Commission said. It is also harder for the EU to recover profits from organised crime, it added. (Anne Damiani | EURACTIV.fr)

EU warns UK of possible trade sanctions if breach of NI protocol continues. Following heated talks in London on Wednesday, European Commission Vice President Maros Sefcovic said he told British Brexit Minister David Frost that a unilateral extension by the UK at the end of this month of grace periods for checks on some goods moving from Britain to Northern Ireland could provoke retaliatory action, the Irish Times reported. Read more.

Italy to get new cybersecurity agency. The Italian government is expected to approve on Thursday (10 June) a decree establishing the new National Cybersecurity Agency (Acn), which will be responsible for coordinating the public entities involved in cybersecurity at the national level”. Read more.

Spain presents plan to tackle soaring youth joblessness. Spain has set curbing soaring youth unemployment, which is among the highest in the European Union, as one of its main priorities for the coming years, EURACTIV’s partner EFE reported.

Pope to meet with PM Orbán after all. Prior to the closing Mass of the 52nd International Eucharistic Congress, Pope Francis is scheduled to meet separately with the leaders of the Hungarian state, President János Áder, Prime Minister Viktor Orbán, and high-ranking government members, according to a statement issued by the Secretariat of the Hungarian Catholic Bishops’ Conference (MKPK). More.

In other news, the Commission says Hungary’s move to force independent radio off air goes against EU law. The European Commission is launching infringement proceedings against Hungary over the Hungarian Media Council’s decisions to reject broadcaster Klubrádió’s application for a broadcasting licence “on highly questionable grounds,” the European executive said on Wednesday (9 June). More.

Poland to stop administering AstraZeneca jab. Poland will suspend administration of the AstraZeneca vaccine, reserving remaining doses for people who have already received a first dose from the manufacturer. Read more.

Belarus opposition leader calls for regime to be prosecuted during Czech visit. Belarusian opposition leader Sviatlana Tsikhanouskaya called for the establishment of an international tribunal to prosecute representatives of Alexander Lukashenko’s regime in a speech before the Czech Senate on Wednesday. Read more.

Croatian police arrest judges accused of corruption by former Dinamo boss. Croatian anti-corruption investigators on Wednesday confirmed, without revealing the suspects’ names, the arrest of three judges on corruption charges. They are reportedly those accused by former Dinamo football club boss Zdravko Mamić, who fled the country and is now living in BiH. Read more.

Lajčak and US special envoy for the Western Balkans, Matthew Palmer, said during their recent visits to Belgrade and Priština that the two sides should decide which topics would be on the agenda of the new round of the dialogue and that everything that had been agreed on previously should be implemented, including the forming of the Community of Serb Municipalities. (EURACTIV.rs | betabriefing.com)

World Bank: Kosovo economy to grow 4% in 2021. Kosovo’s economy is expected to rebound to growth of 4% in 2021 after it contracted an estimated 6.9% last year, maintaining its forecast made in April, the World Bank has said. Kosovo’s gross domestic product (GDP) is further projected to grow by 4.5% in 2022 and 4.1% in 2023, the World Bank said in the June edition of its Global Economic Prospects report. (Željko Trkanjec | EURACTIV.hr)

Albanian President Ilir Meta impeached. Albania’s parliament has dismissed President Ilir Meta for “serious violations” of the Constitution during the April electoral campaign with 105 MPs in the 140-seat parliament voting in favour of Meta’s dismissal, while seven voted against, and three abstained. Read more.