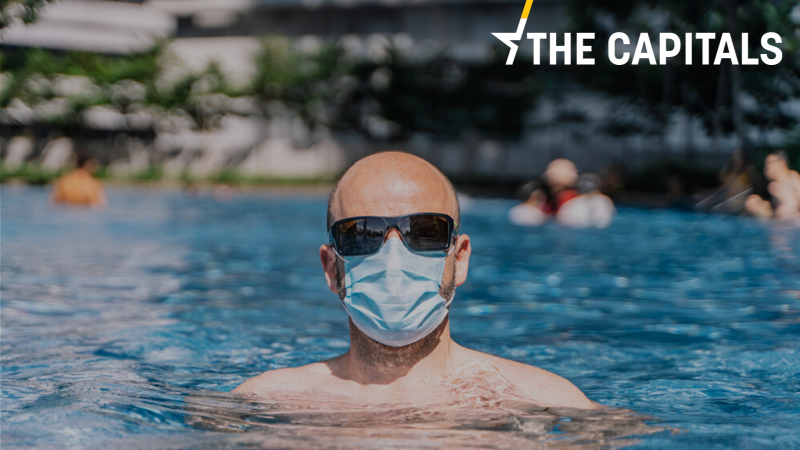 A week ago, though, the Commission chief advised EU citizens not to make summer vacation plans for the time being because no one could predict the evolution of the pandemic in July and August. [Shutterstock/Riderfoot]

Before you start reading today’s edition of the Capitals, feel free to have a look at the article “Michel: EU’s way of working is ‘too slow’“.

***To stay up-to-date on everything to do with the coronavirus across the capitals, feel free to check out EURACTIV’s comprehensive overview, which is regularly updated with the help of our network of offices and media partners.**

LISBON. Contrary to her cautious approach a week ago, European Commission President Ursula von der Leyen now says she is positive about having a vacation this summer – in a “smart” way.

“I think we will find smart solutions to have some vacation, perhaps a bit different, with other hygiene measures and a bit more with social distancing. It’s impressive to see that we find a solution and therefore I am positive about summer vacation,” von der Leyen told Portugal’s SIC TV channel in an interview.

The Commission boss also said there would no cuts in cohesion funds in the next “increased” EU budget. Read more.

An impending requirement to wear masks? Over the weekend, German media speculated if and when the country will mandate the wearing of protective masks while shopping or taking public transit, as this still remains a recommendation from the German government, likely due to a mask shortage.

In an interview with newspaper Bild am Sonntag, Economy Minister Peter Altmaier of the Christian Democratic Union (CDU) estimated that Germany needs between 8 and 12 billion masks per year to ensure everyone wears one while shopping or in public transit. While masks are a recommendation at the federal level, Saxony announced a state-wide law requiring them in public transit, which went into effect on Friday (17 April).

Meanwhile, the coronavirus has brought a polling boost for Christian Democrats. Chancellor Angela Merkel’s CDU is currently polling at 39%, according to recent data from Forsa, which is the highest level of support the party has seen since August 2017.

Read more: Will the coronavirus cause the comeback of Germany’s political centre?

Dutch-Flemish consultation. Flemish Minister-President Jan Jambon (N-VA) and Dutch Prime Minister Mark Rutte are scheduled to discuss COVID-19 lockdown measures later on Monday for the first time since they talked at the start of the crisis a few weeks ago. Alexandra Brzozowski has the details.

France says coronavirus crisis easing, but far from over. The coronavirus situation in France is improving “slowly but surely” and shortages of protective gear such as face masks are easing, Prime Minister Edouard Philippe said on Sunday (19 April), although he warned that the crisis was far from over. Read the full story here.

Social Democrats on the rise. Two recent surveys released in the third week of April show that the Social Democratic Party has substantially increased its popularity. The SDP now enjoys the backing of 20.4%, 3.3% more than a month before, meaning it has pushed the populist Finns Party narrowly down to second place, as it has lost 1.4% of its support and is now at 20.2%. EURACTIV’s Pekka Vänttinen has more.

Medical equipment shortage. The government was forced to admit on Sunday (19 April) that there had been further delays to their plans to obtain protective kits for NHS staff and care workers. EURACTIV’s Benjamin Fox takes a closer look.

COVID-19 in nursing homes. Irish health authorities are to conduct a count of all death rates across residential care facilities, in a bid to survey the impact of the coronavirus in the country’s nursing homes. Samuel Stolton has more.

Conte’s last offensive. In an interview with German daily Süddeutsche Zeitung, Italian Prime Minister Giuseppe Conte said the EU needs all its firepower to cope with the worst shock since the last world war. According to him, issuing common debt will send a powerful message of cohesion, while the eurozone bailout fund (ESM) continues to have a “bad name” for the markets.

“We did not forget that Greece, during the last financial crisis, was required to make unacceptable sacrifices in order to obtain those credit lines”, Conte said. (Gerardo Fortuna | EURACTIV.com)

While Spain now registers a total of 20,453 COVID-19 related deaths since the outbreak began, making it the third-worst country globally in terms of fatalities, behind the US and Italy, the country recorded 410 deaths on Sunday (19 April), its lowest daily death toll since 22 March. EURACTIV’s partner EFE reports.

Re-evaluation in late April. “The progress of the pandemic in Greece will be evaluated at the end of April so that if all goes well, the lifting of restrictions will gradually begin”, Interior Minister Takis Theodorikakos said on Saturday in an interview with SKAI TV, noting that we will return to full normalcy only when there is the vaccine. More on Athens-Macedonian News Agency. Greece has reached so far 2,235 COVID-19 cases and 113 deaths.

Some restrictions lifted. The government has announced that its first step will be to lift the ban on entering forests and increase the number of people in the shops. Besides, it will also ensure that people move around for recreational purposes, but minors under 13 will have to do so in the company of adults.

Besides, according to Prime Minister Mateusz Morawiecki, the economy of the coming weeks should be based on isolation (wearing masks, quarantine), identification (implementing applications to identify people who may be infected) and computerisation (as much remote work as possible). (Łukasz Gadzała | EURACTIV.pl)

Too dependent on China. The reliance of the EU on Chinese imports of medicines, which the new coronavirus pandemic revealed, must be lowered, European Commission Vice-President Vera Jourova, Czech Foreign Minister Petricek and MEP Alexandr Vondra agreed in a Czech TV discussion on Sunday (19 April). “This crisis has shown that we are pathologically dependent on China and India in medicines. This makes us vulnerable and we must radically change it,” Jourova said, adding that the European Commission will prepare a strategic plan to ensure the EU becomes more self-sufficient when it comes to drug production by the end of April. (Ondřej Plevák | EURACTIV.cz)

Expect peak by 3 May, says PM. “I would say that until 3 May, by the time experts say the [coronavirus] peak is reached, we will have 5,000 ventilators, that is more or less safe,” PM Viktor Orban said in a video posted on Facebook while visiting a hospital on Sunday (19 April), adding that “it will go up to 8,000”.

While the country has 1,916 registered cases of coronavirus and 172 deaths as of Sunday (19 April), public hospitals had to free 60% of all available beds last week to ensure 36,000 beds ready, which lead to terminally ill and recovering patients being prematurely discharged, local media reported. (Vlagyiszlav Makszimov | EURACTIV.com)

Restriction ease. The national civil protection authority has extended COVID-19 restrictions for another two weeks but with modifications, such as the possibility to move within counties without e-passes. EURACTIV Croatia’s Karla Junicic reports.

In other news, a shipment of 70 tonnes of protective equipment arrived in Croatia on Sunday (19 April) aboard a special plane from Shanghai. The equipment was sent by two Chinese companies, Meheco and Sinopharm, and more planes with necessary protective gear to curb the spread of COVID-19 will arrive in the days ahead thanks to the government’s efforts, the government said in a press release. Last Sunday (12 April) 60 tonnes of protective gear had arrived from Shanghai. (Karla Junicic, EURACTIV.hr)

Von der Leyen called Borisson on Sunday to greet him on the occasion of the Orthodox Easter. According to the PM’s press office, von der Leyen praised the Bulgarians for observing the confinement measures and for not attending in big numbers church services. On Saturday, Bulgaria had 894 confirmed cases of coronavirus, 10 more than the previous day, with 259 people hospitalised, 36 of them in intensive care. The total number of deaths is 42.