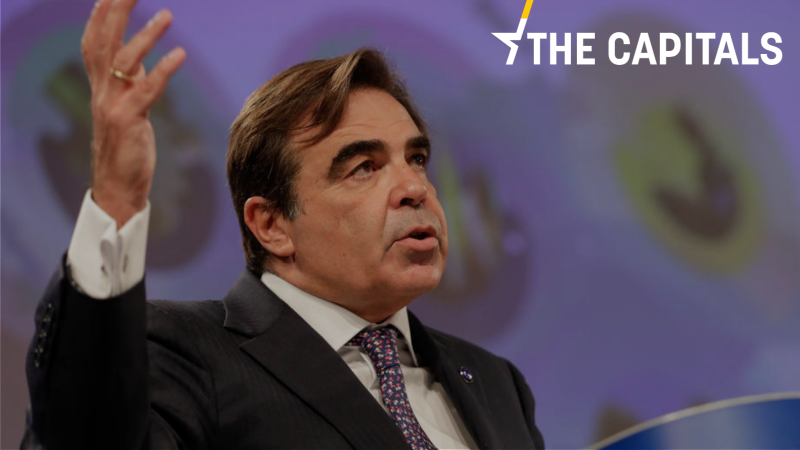 Schinas also lashed out against those who fight against the migration pact saying it is in the interest of centre-right and centre-left forces to back the deal. [EPA-EFE/STEPHANIE LECOCQ]

The EURACTIV Media Network is pleased to announce that a new team has taken over its Greek language edition. Following a successful collaboration with our former partners in Athens, EURACTIV now aims to increase its presence in the country where Europe’s ‘democracy was born’. Read the announcement here.

French FM calls on Europeans to unite on submarine deal. French Foreign Minister Jean-Yves Le Drian repeated his anger and disappointment over the “major breach of trust” between France, Australia, and the US and called for greater unity within the European bloc, after Australia scrapped a submarine order with Paris in favour of a deal with Washington and London. Read more.

Austria’s opposition slams Kurz over stance on Hungary, Poland. The opposition in parliament has condemned Chancellor Sebastian Kurz for having called for greater fairness towards Poland and Hungary and for being soft regarding the respect of the rule of law. Read more.

UK-France defence summit cancelled following submarine row with Australia. A UK-France defence summit planned for this week has been cancelled as the row over the controversial Aukus defence cooperation deal with the US and Australia continues. The meeting between Defence Minister Ben Wallace and French counterpart Florence Parly has officially been postponed despite hopes by UK officials that it would take place as planned. Read more.

Ireland now topping EU list of most vaccinated. Ireland has now vaccinated 90% of over 16-year-olds, making it the EU country with the highest proportion of vaccinations, followed closely by Malta, Denmark, and Portugal, the latest data from the European Centre for Disease Control shows. Read more.

EU should stay away from Finnish forests. Forestry should be based on local conditions and knowhow in each member state, the Finnish government’s ministerial committee on EU affairs, chaired by Prime Minister Sanna Marin, said on Friday, highlighting that forest policy belongs to the competences of member states. Read more.

Greek politicians clash over status of deliverymen. The decision of a company that used the efood platform to change the status of its 115 employees to freelancers has triggered not the reaction of those directly affected, but also from the food industry as a whole and became a central issue of controversy between the Greek government and the opposition. Read more.

In other news, thousands of COVID-19 vaccines are about to expire in the Catalonia region (northeast of Spain) due to the slow inoculation pace and low demand, local health authorities have warned. Read the full story.

Vaccine bookings spike in Italy after COVID pass extended to all employees. Bookings for coronavirus vaccines in Italy jumped last week after the government said all employees must show proof of a jab, negative test or recent recovery from COVID-19 or be considered on unpaid leave. Read more.

Tusk offers PiS a chance to eliminate Polexit. In the middle of a national debate about leaving the EU – also known as ‘Polexit’ – the European Council’s former president Donald Tusk offered his biggest opponent, the ruling Law and Justice (PiS), a hand in changing the nation’s Constitution to ensure such a move was not possible without a two-thirds majority in parliament. Read more.

Czechia to begin COVID-19 booster shot rollout for all. Czechia is offering a third jab to all people who completed their vaccination eight months ago, despite a recent report by the European Centre for Disease Prevention and Control (ECDC) stating that there is no urgent need for booster doses for the fully vaccinated. Read more.

Hungarian opposition primaries suspended after ‘cyberattack’. On the day of the first round of the opposition primaries, meant to choose one joint candidate for every electoral unit in next year’s election, the pre-election was halted early afternoon by the overload of the IT system that fed the voting, Telex reported. Read more.

Highways cross but don’t connect. The National Highway Company will open a new highway in Slovakia on 26 September but will not include a crossing with highway D1, the main road connecting the west and east of the country. Drivers will thus have to find another way to get from one highway to the other. Read more.

Bulgaria launches lottery to stimulate COVID-19 vaccination rates. Bulgaria plans to organise a lottery with prizes for those who have been vaccinated, caretaker Tourism Minister Selta Baltova announced in an interview with Nova TV, when asked if her ministry would consider implementing tourist vouchers for vaccinations as the country struggles with its very low vaccination levels. Read more.

Journalists beaten during illegal logging investigation in Romania. Two journalists and an environmental activist were attacked last week while filming a documentary about illegal deforestation in Romania, Greenpeace has said. They were severely beaten by around 20 attackers, some of whom were later arrested. Read more.

Croatian Ombudswoman: continuous education solution to violence against women. The key to solving the problem of violence against women lies primarily in the continuous education of those applying laws and regulations, gender equality ombudswoman Višnja Ljubičić has said ahead of the National Day of Combating Violence Against Women on Wednesday. Read more.

Slovenia now member of EU Med. Slovenia officially became a member of the club of Mediterranean EU countries henceforth known as EU Med, which has grown from seven to nine members with the inclusion of Slovenia and Croatia at a summit in Athens. Read more.

Pride parade, anti-globalist rally run parallel in Belgrade. As the Belgrade Pride march was taking place on Saturday, several hundred people assembled at an anti-globalist rally in downtown Belgrade, marching through the streets and chanting insults against Serbian President Aleksandar Vučić and Prime Minister Ana Brnabić in front of the Serbian Presidency with eggs. Police prevented any contact, however. Read more.

US, Kosovo in conflict regarding the gas pipeline. Economy Minister Artane Rizvanolli has said the government needs additional time to decide on building the infrastructure for the distribution of US natural gas. Read more.