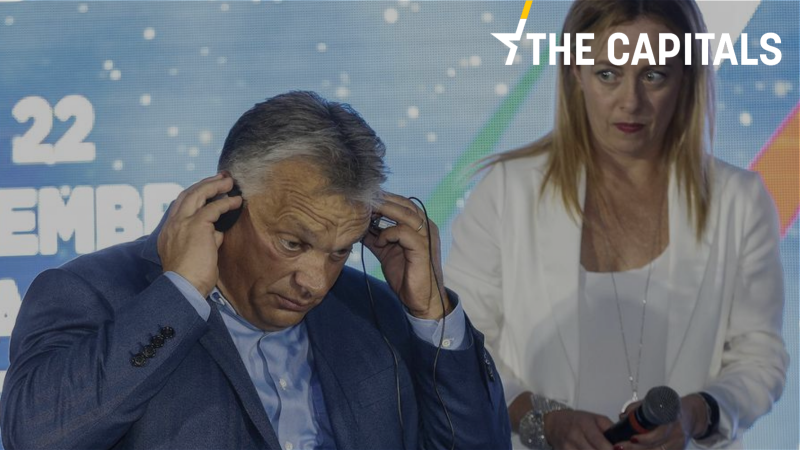 Before the dinner with Orbán, Meloni - who is on a tour of European institutions ahead of the EU Council summit on Thursday and Friday - met with European Parliament President David Sassoli and Economic Affairs Commissioner Paolo Gentiloni. [EPA-EFE/Fabio Frustaci]

Before you start reading today’s edition of the Capitals, feel free to have a look at the article “German recovery plan looks greener than it is, critics say“.

The months-long courtship of Hungarian Prime Minister Viktor Orbán and his Fidesz MEPs – who are without membership in the European Parliament after leaving the European People’s Party (EPP) – entered a new stage on Wednesday during a dinner between Orbán and the president of the European Conservatives and Reformists (ECR) group and leader of the national-conservative Brothers of Italy party, Giorgia Meloni. Read more.

Diplomat: Hungarian FM’s stance on EU partners ‘quite aggressive’. The rhetoric of Hungarian Foreign Minister Péter Szijjártó during the discussion over LGBTQI+ law was “unprecedented”, “unacceptable” and “quite aggressive” toward other EU partners, an EU diplomat told EURACTIV. More.

Vaccination threshold of 70% reached in Belgium. According to the latest national health data, 70.2% of all over-18s in Belgium have received at least a first vaccine dose, while fewer than 500 COVID-19 patients are currently in intensive care. This is likely set to trigger the earlier implementation of the next stages of Belgium’s “summer plan” for reopening, including further lifting of limits on social contacts and attendance at outdoor mass events. (Alexandra Brzozowski, EURACTIV.com)

France to receive €39.4 billion from Brussels for its recovery plan. European Commission President Ursula von der Leyen met with President Emmanuel Macron in Paris on Wednesday to announce her approval of the country’s national recovery and resilience plan

France will be granted €39.4 billion under the Recovery and Resilience Facility aimed to aid member states recovery from the economic impact of the pandemic. (Mathieu Pollet | EURACTIV.fr)

EU-UK sausage war truce announced. The row between the EU and Boris Johnson’s government over whether sausages can be transported from Britain to Northern Ireland appears to have been resolved, at least temporarily on Wednesday.

EU member states are understood to have informally agreed to grant Britain a three-month extension to the grace periods on chilled meats, which was due to expire at the end of June. As part of the agreement, the UK will be expected to keep to the EU’s food safety standards. of the contentious aspects of the post-Brexit Northern Ireland Protocol. (Benjamin Fox | EURACTIV.com)

Estonia’s Arctic Council bid fails. Estonia’s bid for observer status in the Arctic Council was shot down by the council’s members – Finland, Sweden, Norway, Denmark, Iceland, Canada, Russia and the US – although it has not been revealed who was in favour or against. Read more.

Survey: Nordic countries are most expensive in EU. Prices in Denmark, Iceland and Norway exceed the EU average by 40% and Sweden by around 30%. Prices in Finland are the lowest among Nordics, but still eighth highest in Europe and exceeding the EU average by 26%, making the Nordic countries some of the most expensive in the EU, a recent Eurostat survey has revealed. Read more.

Initiator Belgium approached all 27 EU countries to sign the letter but Czechia refused, along with the rest of Central Europe and the Balkan states. Czechia has so far not offered an explanation for the decision. (Ondřej Plevák | EURACTIV.cz)

Poland reimposes 10-day quarantine for arrivals from outside Schengen. Poland will reintroduce mandatory quarantine for those arriving from outside the Schengen area, due to fears of the more infectious delta coronavirus variant spreading across the country, Deputy Health Minister Waldemar Kraska has announced. Read more.

EPP sticks with Borissov despite corruption scandals. The centre-right EPP group reaffirmed its support for former Bulgarian premier Boyko Borissov ahead of the 11 July elections, despite the multitude of corruption and brinkmanship scandals unveiled by the caretaker government.

Speaking in a videoconference, Manfred Weber, the EPP leader in the European Parliament, expressed his strong support for Borissov’s GERB party and said that they would keep a close eye on the snap parliamentary elections. At the 4 April general elections which failed to produce a government, GERB was ostracized by the remaining political forces. More.

Slovenia issues first green bond. Slovenia has issued its first sustainability bond, becoming the first central or east European country and only the second EU member state to do so. The €1 billion issue was far oversubscribed. Read more.

In other news, the director of the IT and e-Administration office Mihailo Jovanović appealed to young Serbian citizens to get vaccinated against the coronavirus, as “just slightly over 17% of the population aged 18 to 30 had done so.” (EURACTIV.rs | betabriefing.com)

Child trafficking up in Western Balkans during pandemic. Child trafficking has increased during the COVID-19 pandemic, according to figures released at a regional conference in Sarajevo organised by the EU and the Council of Europe on Wednesday.

The pandemic has made children even more vulnerable to human trafficking because of growing economic uncertainty, unemployment and restricted movement, according to organisers of the two-day conference: “Acting together in face of crisis: Protecting children from trafficking and exploitation in the Western Balkans.”

Child trafficking in the Western Balkans continues to increase despite numerous legislative and practical measures taken over the years to crack down on it. In the Western Balkans, children are trafficked for sexual exploitation, forced marriages, labour exploitation, forced begging, and forced inclusion in criminal activities, organisers said. (Željko Trkanjec | EURACTIV.hr)