France’s municipal elections on Sunday (16 March) will be a major test for President Emmanuel Macron in the wake of the protests by the gilets jaune and over controversial pension reforms. They will also be the first such polls in which British citizens in France will be unable to vote.. [EPA / GUILLAUME HORCAJUELO]

No less than 33 election lists are taking part in the EU elections in France on 26 May. But that does not mean French people are highly mobilised for the vote, even though their president is an ardent defender of Europe.

French political parties had until 3 May to submit their lists of 79 candidates for the European elections. And though the French are still relatively indifferent to the electoral campaign, a record number have been submitted, including three ‘gilets jaunes’ lists.

The proliferation of candidates reflects a fragmented political landscape in which the French electorate will have to choose their MEPs.

While most other parties are still taking their first steps in the European elections, LREM revealed its leading candidate at the start of March, hoping this would give the party enough time to mobilise its political allies in the European Parliament.

LREM has been ahead of Le Pen’s RN for several months, but this week, the RN hit the front, according to a study by Ifop for Paris Match, CNews and Sud Radio.

Another opinion poll, conducted by OpinionWay, gave Le Pen’s party 24% of voting intentions, compared to 21% for the LREM. The RN’s predecessor, the National Front, came out as the biggest French party in the European Parliament after the 2014 EU elections.

The election results will be a referendum on Macron’s policies, and will also give LREM legitimacy, or not, to impose itself as a new force within the Alliance of Liberals and Democrats for Europe (ALDE), the European Parliament’s centrist group, which is currently being reshuffled.

Behind the leading duo, the traditional parties are presenting themselves in different shapes following the 2017 presidential election fiasco.

The list of the right-wing party Les Républicains, led by François-Xavier Bellamy, is currently polling at 15%.

Other lists are below 10%, such as green party Europe Écologie Les Verts (9%), and left-wing parties like La France insoumise (8.5 %) and PS/Place publique (5%).

Nicolas-Dupont Aignan from the right-wing Debout la France, has announced his wish to join the European Conservatives and Reformists (ECR) group.

Benoît Hamon’s leftist (Génération.s) and the French communist party (PCF) are currently polling below 5%, meaning they will not meet the minimum threshold defined by the French electoral law.

Surprise guests of the European vote, the ‘gilets jaunes’ will be represented on three different lists, following various weeks of uncertainty on the movement’s adaptation to politics.

Although this weekend marked the weakest gilets jaunes mobilisation since the start of the movement, the final election lists include three of their offspring: “Evolution citoyenne” (citizen evolution) of Christophe Chalençon, “Alliance jaune” (yellow alliance) by singer Francis Lalanne and “Mouvement pour l’initiative citoyenne”. 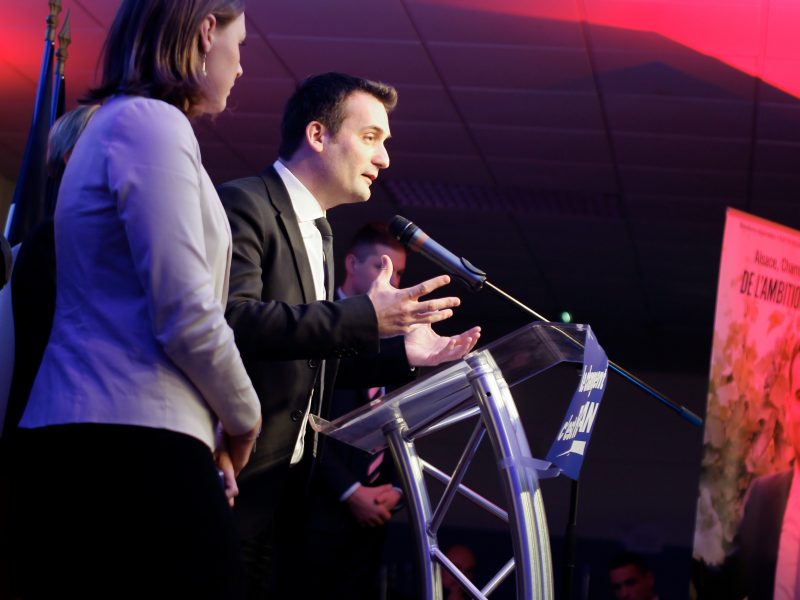 If the gilets jaunes had presented a joint list, they could obtain 12% of the votes, wrote the French weekly newspaper Le Journal du Dimanche, basing this figure on a recent Ipsos poll. The movement would secure voters from Le Pen’s Rassemblement National and Melenchon’s La France Insoumise.

The potential of these lists remains very uncertain. They were polling at around 12% when the movement was at its peak, but fell to a mere 2% just before the lists were made public.

The extra candidates appear unlikely to persuade more voters to turnout. Only around 40% are expected to vote.

High levels of abstention for the European elections are nothing new. Since the first direct elections to the European Parliament in 1979, participation has declined from 61% to 42.4% in 2014.