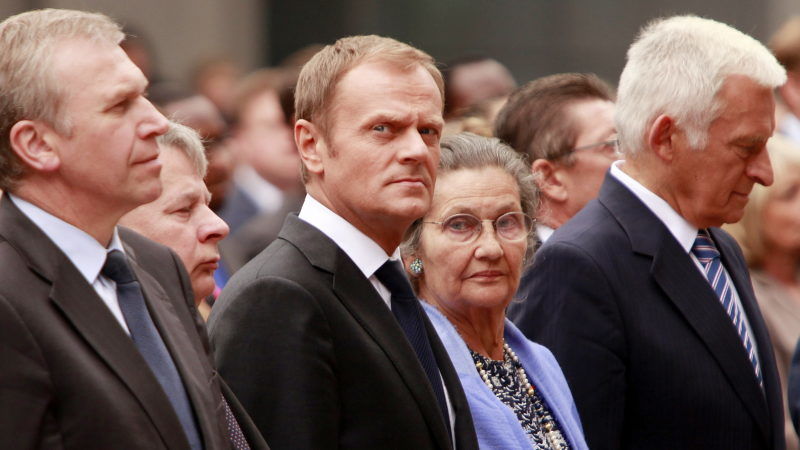 Simone Veil between the then Polish Prime Minister Donald Tusk, the then European parliament President, Polish Jerzy Buzek and former Belgian Prime minister Yves Lerteme in 2011 as they attend a ceremony of inauguration of the 'Esplanade Solidarnosc 1980' and 'Agora Simone Veil' at the European Parliament in Brussels, [EPA/OLIVIER HOSLET ]

One of the founding mothers of the European Union, French politician and Holocaust survivor Simone Veil died on Friday (30 June) at the age of 89.

A staunch believer in European integration, she became the first president of the elected European Parliament in 1979 and left her mark on European history.

“Her path is an example to be followed by all Europeans. Her memory and legacy must be considered as sources of inspiration for the next generations,” said MEP Manfred Weber, Chairman of the EPP Group in the European Parliament.

“Today, the European Union is mourning the death of one of its most emblematic figures. Simone Veil was an activist for European ideas, a symbol of peace and hope. We will be forever grateful,” added Weber.

Veil survived Auschwitz and later, as minister of health, allowed French women the right to control their bodies by steering abortion law through Catholic France.

“She lifted European politics to a new level as first president of the European parliament, where her intellect, grace and calm Europeanism turned the Strasbourg assembly into a serious body,” said Denis MacShane in 2009.

Former president of the European Commission Jacques Delors remembers the momentum of those years.

“The European Parliament was making its first steps, everything was new, everything had to be invented. We lived in the infancy of an enthusiastic Europe, but during her presidency Simone Veil showed a rare quality: discernment. From her inaugural speech, she stressed the difficulties of European integration. ”

In her inaugural speech, Simone Veil referred to the wars that divided Europe. “The period of peace we have enjoyed in Europe has been an exceptional piece of good fortune, but we should none of us underestimate its fragility. Is there any need to stress the novelty of this situation in Europe, whose history is a long chapter of fratricidal and bloody wars?” she said.

“We need a Europe capable of solidarity, of independence and of cooperation,” she stressed then.

Born in Nice to an atheist Jewish family in 1927, Simone Jacob (her maiden name) was arrested by the Gestapo in March 1944 and deported to Auschwitz with one of her sisters and her mother Yvonne.

The two girls, who were put to work in a concentration camp, survived. Veil’s mother died of typhoid in Belsen just before the camp was liberated in 1945 and her father and brother were last seen on a train of deportees bound for Lithuania.

“Sixty years later I am still haunted by the images, the odours, the cries, the humiliation, the blows and the sky filled with the smoke of the crematoriums,” Veil said in a TV interview broadcast in 2005.

After the war, she studied law at Sciences Po, the elite school of political science in Paris, where she met her husband Antoine Veil, who died in April 2013.

Veil dismissed Hollywood films like Schindler’s List and remains bitter that it took the French state until 1995 to acknowledge that it was the official French government, not some renegade clique of Petainists that organised the deportation of Jews from France as late as 1944.

Extraordinary video of Simone Veil campaigning in 1979, violently attacked by Le Pen & his men: "I am not afraid" https://t.co/E9IceLr4AE

“I feel that the day I will die, it is the Holocaust I will think about,” she said in 2009. Unlike other survivors, Veil has kept all her life, on the left arm, her Auschwitz registration number 78651. “Some survivors preferred to try to turn the page by erasing the number that the Nazis had tattooed on their arm, others decided to face the “memory,” explained his son Pierre-François. “This is the case of Mother. In summer, she was often naked, her number was even more visible than today.”

Former president Valery Giscard d’Estaing, whom Veil served as health minister in the 1970s, said: “She was an exceptional woman who experienced life’s greatest joys and its greatest sadnesses.”

“France has lost a figure the likes of which history produces few,” French Prime Minister Edouard Philippe added in a tweet.

The tributes poured from across the continent. “She suffered personally from the tragic tearing asunder of Europe and managed, through her political engagement, to help build sustained peace in Europe,” European Commission chief Jean-Claude Juncker wrote in a letter to Macron.

Now, some are asking for her inhumation in the Panthéon. A petition was sent to president Macron.

Macron’s office announced a state funeral for Veil on Wednesday, adding that EU flags would fly at half mast on the day with French flags on public buildings bearing a black ribbon in her memory.

Simone Veil was a symbol of democracy and historical memory for Europe.

#SimoneVeil was a symbol, legend & proof that nothing can beat the human spirit.Few days after #HelmutKohl we lost another European hero RIP pic.twitter.com/us5y9XwFFo