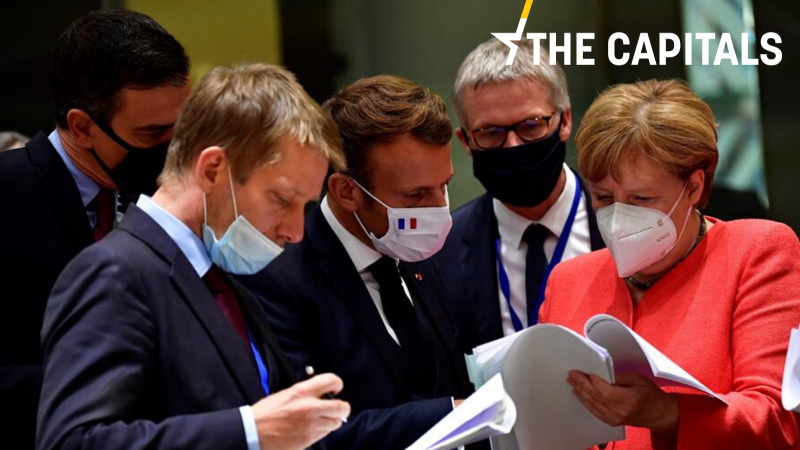 Before you start reading today’s edition of the Capitals, feel free to have a look at our fresh EU summit story Council brokers historic stimulus pact as budget cuts, rule of law retreat plague deal by Beatriz Rios and Sam Morgan.

The devil in the details. It took one of the longest-lasting summits in European Council history but heads of state and government finally compromised on a ‘historic’ €1,074 billion long-term budget and recovery fund instrument early on Tuesday (21 July) morning. EURACTIV has the full story here.

A message from Facebook:
At Facebook, we are committed to helping small businesses succeed. We partnered with the World Bank and the OECD to survey businesses in 50+ countries and regions to understand the challenges they face and ways we can better support them.

Merkel puts on a positive spin on summit compromise.It appears Angela Merkel’s optimism about the possibility of reaching a deal on Monday (20 July) was well-founded. Even though the €390 billion in grants is quite a bit less than the Chancellor and her French counterpart were hoping for, the German Chancellor put a positive spin on the deal, saying that the agreement will allow the worst-hit countries to recover. The compromise has nevertheless left some to wonder whether the Franco-German engine is losing steam. EURACTIV Germany’s Sarah Lawton digs deeper.

Happy about rebates. Chancellor Sebastian Kurz seems very pleased with the result. “We were able to reach a good result for the future of the EU and for Austrian interests”, he tweeted, and emphasized that a “debt-union” has been prevented, taxpayers have been relieved and reforms have been guaranteed. Media coverage focused on the increase in rebates for Austria, which now stand at 565 million Euro per year. However, Kurz’ fellow ÖVP member Othmar Karas, MEP and the EP’s vice-president, showed disappointment. “I would have expected more from the heads of state and government”, he tweeted. “Our common future must not be traded in for national petty cash.”

Macron hails EU deal. The EU has reached a historic deal that puts at the bloc’s disposal the shared financial resources needed to tackle the challenges of the COVID-19 crisis, French President Emmanuel Macron told reporters after the summit. Read more here.

Red lines and missed records. After the EU summit, Prime Minister Mark Rutte said the outcome of the negotiations was within the Dutch red lines, especially with the governance model attached to the deal, which would give the Netherlands and all other member states the option to trigger an “emergency brake” on payments if they believe a government hasn’t fulfilled its reform promises. Read more on the Dutch here.

Government formation is back. Belgium may have to head to the polls again if two advisers appointed by King Philippe on Monday (20 July) fail to find agreement on forming a coalition government over the next fifty days. EURACTIV’s Alexandra Brzozowski has more on the story.

Regarding the budget negotiations, the PM seemed optimistic. “It is already something that is problematic and difficult to accept. But in order to find a compromise, you may have to say yes”, he added. (Anne Damiani | EURACTIV.com)

The report, which will be published on Tuesday, will describe that Russia tried to divide the UK in 2014 and that it was “the first post-Soviet interference in a Western democratic election,” the newspaper added, citing comments from the 50-page report.

PM Marin content with deal. Finnish Prime Minister, Sanna Marin was all smiles at Tuesday morning’s press conference in Brussels. The share of grants in the recovery package became €110 billion less than originally planned in the Commission’s proposal.

In line with Finland’s negotiation targets, a third of all funding will be used for measures against climate change and there will be some 25% more funding for research. “It was sensible to build up a whole that is sustainable and acceptable to all, but also defend national interests,” said Marin.

She was particularly satisfied with the extra funding of €400 million for Finland’s agriculture sector and with the €100 million for the country’s northern and eastern sparsely populated areas.

More centralized control over EU Recovery Fund spending. Italian Prime Minister Giuseppe Conte told the media during the intense negotiations on the EU Recovery Fund that there was no more room for joking around, adding that “we need to look at the broader horizon, as we are going to give a European answer to the crisis.”

Conte also said that “there has been a debate in the European Council, but I will never allow a single country to hold the power to control and verify spending of the Recovery Fund. It has to be done by a European institution, this is a point which I strongly support,” the PM added. EURACTIV Italy’s Alessandro Follis digs deeper.

Spain satisfied with “boost”. “The European Commission will borrow for the first time in history to finance programmes,” Sánchez said, adding that this is an “unprecedented” event.

Spain will receive 140 billion (the equivalent of 11% of Spanish GDP) in six years, of which 72,7 billion correspond to grant and the rest to loans. “It is an extraordinary boost”, added Sánchez, who insisted that it is a “great agreement for Europe and for Spain”.

“I think the agreement reached is a good agreement. It was at the limit of what would make this fund not robust enough to respond to this first phase of the crisis,” said Prime Minister António Costa, adding that “in the combination of loans and grants, I think we will have a fund that will have €700 billion.” “It is, in any case, a historic step to set up such a fund on the basis of debt issuance by the Commission,” the PM added. (André Campos e Ana Matos Neves, Lusa.pt)

In other news, the number of unemployed registered in employment centres increased to 36.4% in June in year-on-year terms and fell by 0.6% compared to May, according to data released on Monday by the Employment and Professional Training Institute (IEFP).

Greek PM promises ‘responsible use’ of funds. “We have finally succeeded today in launching a very ambitious response to the symmetrical shock caused by the pandemic in all economies,” Greek Prime Minister Kyriakos Mitsotakis told reporters after reaching a deal.

“We’re returning to Athens with a total package, which exceeds 70 billion, a size unprecedented for our country, which we will manage with responsibility and prudence,” he added. EURACTIV’s media partner Athens News Agency reports on Greek reactions.

Poland happy with summit result. “Europe needs a financial injection now. The joint work of the Visegrad Group has led to this success”, Polish Prime Minister Mateusz Morawiecki told a joint presser with Hungary’s Viktor Orban after the summit’s conclusion, celebrating the fact that rule of law conditionality had been significantly watered down. Read our take here.

Czech PM Babiš satisfied. “The result is good for us, I am happy about that,” said Czech PM Andrej Babiš right after the European Council meeting. The Czech Republic is particularly satisfied with “goodies” it has received – the deal includes an extra € 1.55 billion for the Czech regional development.
“We focused on the increase of cohesion,” confirmed Babiš to EURACTIV.cz adding that the Czech Republic doesn’t mind final cuts in the Just Transition Fund (JTF) because it is easier to use money from traditional cohesion programmes than from JTF. The establishment of the JTF was a condition under which the Czech Republic gave a green light to the climate neutrality goal for 2050.
(Aneta Zachová, EURACTIV.cz)

Great news for Slovakia. That’s how Slovak PM Igor Matovič described the outcome of the summit negotiations. Even though grants have been cut by more than 100 billion euros, Matovič said that „we have achieved everything we wanted to“. „It always depends on what kind of grants we are talking about. If it is grants that Slovakia is not able to draw effectively, such as Horizon, it will not hurt us so much,” he said pointing out that his focus was to avoid cuts in the Cohesion Funds and grants under the Recovery and Resilience Facility. (Marián Koreň, Euractiv.sk)

“Soft” rule of law link unacceptable“. The fact that we now try to figure out what it means to link the use of EU funds to “soft” rule of law conditionality is fundamentally unacceptable to us,” family affairs minister and Fidesz’s vice-president for foreign relations, Katalin Novák, told atv.hu on Monday (20 Monday), as leaders were still negotiating the new long-term budget and recovery plan.

PM Plenković happy. We are bringing home €22 billion, which is a guarantee of the fast economic recovery of Croatia and its subsequent growth, Andrej Plenkovic tweeted after the summit.

Earlier, while talks were still ongoing, he was asking the EU to recognise the urgency of the COVID-19 crisis by reaching an ambitious and robust financial deal. He that Croatia is in favour of linking the rule of law to the use of the financial instruments of the EU, and that his biggest focus is to make sure that the youngest EU member state obtains more than €20 billion through the MFF and crisis instrument – which he did. (Tea Trubić Macan, EURACTIV.hr)

Illiberal Slovenia? Hungary’s insistence that distribution of EU funds should not depend on respect for the rule of law has been supported by Poland and by Slovenian Prime Minister Janez Janša. Veteran diplomat Roman Kirn (ex-ambassador to US, Netherlands) believes this constitutes a major change of course in the country’s foreign policy, the daily Delo reported in an article titled ‘Slovenia en route to join illiberal states‘.

In other news, Slovenia will build a new wind farm with a potential capacity of 21.6 megawatts, the government decided earlier this month. The wind farm with six wind turbines will be built by Dravske Elektrarne Maribor on Maceljska Gora, a mountain ridge near the border with Croatia, the official STA news agency reported. (Zoran Radosavljević | EURACTIV.com)

A rising public debt. “The state no longer possesses available resources for a strong intervention because it had made an irrational decision to borrow over €600 million to pay €100 to every adult in the country,” according to the Serbian Fiscal Council’s report, which details the effects of the health crisis on fiscal and economic trends and suggests recommendations for fiscal policy in 2021.

“Under the circumstances, the state deficit will reach a record 7% of the GDP, and the public debt will grow to over 60% of the GDP by the end of the year,” the Fiscal Council reported, adding that the increase in public debt was primarily the consequence of an excessive pay raise in the public sector of nearly 10%, with which the country entered 2020.

Final Belgrade-Pristina agreement to be decided in Brussels. Belgrade and Pristina’s delegations are expected to discuss the drafting of a “final agreement between the two countries” at their next meeting in Brussels on Wednesday (23 July), announced Kosovo Prime Minister Avdullah Hoti.

Having explained that “a national coordinator” would represent Pristina at the meeting, Kosovo’s PM said that a technical dialogue no longer existed and that only a political one leading to “mutual recognition” was taking place. EURACTIV Serbia takes a closer look.