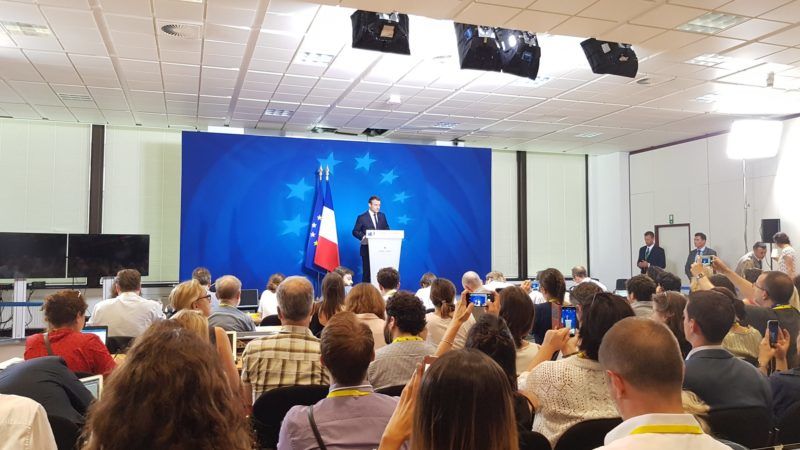 Probably the biggest advancement is the decision to launch Permanent Structured Cooperation (PESCO). Dubbed “the sleeping beauty” of the Lisbon Treaty, PESCO is expected to become a game changer in European security.

.@JunckerEU "I said in my 2014 election campaign we should wake Sleeping Beauty of enhanced cooperation on #defence. Now we do it" #EUCO pic.twitter.com/hHbrpGV1Kb

EU leaders also welcomed the Commission’s communication on a European Defence Fund, composed of a research arm and a military capability arm.

Council President Donald Tusk called the decisions “a historic step”, because he believes such cooperation will allow the EU to move towards deeper integration in defence. He said that every EU country was invited to join.

Within three months, member states must agree a common list of criteria and commitments, together with concrete capability projects, in order to launch the cooperation.

French President Emmanuel Macron, for whom this was the first Council summit, said in a packed pressroom that credit was due to Commission President Jean-Claude Juncker for having tabled a “strong” proposal on defence on 7 June, and that the proposal had immediately obtained the full support of Paris and Berlin. This, he said, allowed the summit to adopt a text, that represented a “real advance” in defence policy.

Macron expressed the hope that this work would be taken a step further at the French-German intergovernmental meeting on 13 July.

He said that the European Defence Fund, prepared in only five months, was of an unprecedented scale, both in respect of the financial means committed and the perimeter of activities envisaged.

Macron said that the entire research and development phase in defence could benefit from European funding, which would bring progress in the standardisation and improvement of equipment.

In answer to a journalist who said that even after today’s decisions, the EU was a long way from a real European Defence Union, Macron said he disagreed with those who suggest that the present effort is a replay of 1954.

In 1954, France scuppered its own grand plan for a European army.

In 1950, French Prime Minister René Pleven proposed a plan for far-reaching defence integration, including the setting up of a European Army and the appointment of a European Minister of Defence.

After two years of negotiations, all six members of the then European Coal and Steel Community signed the “Treaty establishing the European Defence Community”, envisaging a common European army with 40 divisions of 13,000 soldiers in a common uniform, with a common budget, joint military procurement and common institutions.

In 1954, however, after ratification by the Benelux countries and Germany, the project encountered a political impasse in France, effectively putting an end to the idea of a common European defence for the next half a century.

Macron said that when he had held other functions (notably as economy minister) he had seen a Europe which “recedes, which stutters”, but that this was no longer the case with defence.

“For years, there has been no advance on the Europe of defence. There is an advance today. Is it a substitute to national efforts? No. Is it progress? Yes,” he said.

Macron’s main message was that Europe needed to better protect its citizens from a range of challenges including terrorism, unfair competition and dumping, as well from social dumping within the bloc.