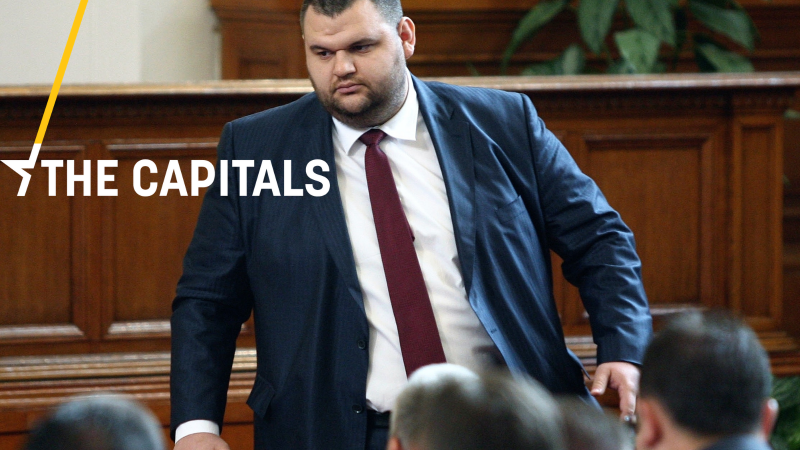 The Capitals is EURACTIV's daily newsletter from across Europe. [EPA/STR]

ALDE silent over rogue Bulgarian candidate: Delyan Peevski, perhaps the most controversial figure in Bulgarian politics, will stand for the European elections on the list of the Movement for Rights and Freedoms (DPS, ALDE-affiliated).

Peevski controls a significant number of media in Bulgaria and owns a large chunk of print media distribution. A few days ago, he was named by Reporters Without Borders as one of the main reasons for the poor state of the media in Bulgaria. The country is 111th in the world media freedom index – last in the EU.

The media mogul is currently a national parliamentarian for DPS, but rarely appears in the National Assembly.

Five years ago Peevski was elected as an MEP, but he surprisingly ceded his seat to Iskra Mihailova, at that time minister of ecology, reportedly at the request of ALDE leader  Guy Verhofstadt.

EURACTIV asked ALDE to comment on Peevski’s nomination – at No.2 in the list, he is extremely likely to be elected – but they declined.

Asked if the situation with Peevski was comparable to the centre-right EPP’s approach to the Fidesz party of Viktor Orban, an ALDE spokesperson said the case was different because it was not about an affiliated party but about a single candidate from an affiliated party.

“The ALDE Party never comments on the composition of electoral lists by our member parties. In case Mr. Peevski gets elected and in case he takes up his seat in the European Parliament, it will be a matter of the Group to ensure their members respect our Liberal Democratic values”, an ALDE spokesperson said.

It is unclear if ALDE realises how explosive the candidacy of Peevski could be. ALDE would like to join forces with Emmanuel Macron’s LREM, but this could complicate such plans. [More] (Georgi Gotev, EURACTIV.com)

Bulgaria’s carbon neutrality under threat: By postponing the gradual closure of coal-fired power plants rather than preparing for it, the government has created a risk of social tension, financial risks to the state energy sector and increased future costs, the Centre for the Study of Democracy found in a report.

Without a serious revision of the goals set in the current draft of the Integrated National Plan for Energy and Climate, Bulgaria will not achieve ‘carbon neutrality’ by 2050, the authors of the report warned. (EURACTIV’s partner Dnevnik.bg)

Manfred Weber, the Spitzenkandidat for the centre-right EPP, has vowed to oppose the Nord Stream 2 pipeline project should he be elected as president of the EU Commission. This would counter the efforts of the German government to finalise the gas pipeline. In Weber’s view, Nord Stream would not be in Europe’s interest, as it will increase gas dependency from Russia. Weber emphasised that he is a European, not a German candidate in the upcoming elections.

The German government has pushed other member states to accept Nord Stream and agreed a compromise with France in February. According to media reports, Germany has agreed to drop certain exemptions concerning Article 13 of the EU copyright directive. (Florence Schulz, EURACTIV.de)

Weber’s ‘guarantees’: In the meantime, Weber launched his official campaign in Athens yesterday and signed the ‘Guarantee for the next European Commission’.  According to it, 10,000 new Frontex guards will be activated by 2022 and not 2027 as currently planned, and a European FBI against terrorism established.

Weber said the EPP would back a European Digital Tax to help fund a Technology Transition Fund for those affected by technological changes. He also vowed to fight for global treaties banning single-use plastic waste as well as enforce everywhere a ban on child labour. He also spoke against “Brussels bureaucracy” saying he will abolish at least 1,000outdated legislative texts.(Theodore Karaoulanis, EURACTIV.gr)

Cross-party talks between Theresa May’s government and Labour’s Jeremy Corbyn on Brexit are on the brink of collapse after Labour said that the prime minister had offered no concessions on their key demands, including a permanent EU-UK customs union. May is believed to be planning to hold another vote on her Brexit deal within the next ten days in a final bid to avoid having to hold European elections in May. (Benjamin Fox, EURACTIV.com)

Nathalie Loiseau under attack: Right and left-wing parties have reacted to the news that in 1984 Nathalie Loiseau, head of President Emmanuel Macron’s ‘Renaissance’ list for the EU elections, was a candidate on a student election list close to the extreme-right. “No wonder why she only wants to debate with Jordan Bardella [spokesman of the National Rally], he must remind her of her youth,” tweeted Manon Aubry from leftist La France insoumise (LFI).

“We should show a little more humility when we have these past experiences,” Republican (LR) leader François-Xavier Bellamy told Radio Classique. MP Sonia Krimi from La République En Marche said she was shocked but described it as “ a mistake of youth.” (EURACTIV.fr)

Government tension is mounting: The two ruling parties Five Star Movement and Lega have clashed again, this time over the central administration portion of the huge debts Rome’s city council has accumulated. The Five Star Movement, which rules Italy’s capital at the moment, wants to transfer the debt as part of a new ‘Growth’ decree-law, while Lega leader Matteo Salvini does not want to provide any kind of financial support. (Gerardo Fortuna, EURACTIV.com)

London loves: Former finance minister Jan Vincent Rostowski, who also holds UK citizenship, has decided to run in the EU elections from the UK. He is the No. 2 candidate in London for the Change UK party, formed by former Conservative and Labour MPs.  (EURACTIV.pl)

Surveillance of journalists: There has been massive surveillance of several Slovak journalists and politicians for a period of around six months in 2017-2018, Dennik N reported last week. Businessman Marián Kočner, who is charged with ordering the murder of journalist Jan Kuciak, commissioned the professional surveillance for discreditation purposes.

“I expect decisive action on the part of the prime minister, the announcement of concrete measures so that every citizen of this country could feel safe,” said President Andrej Kiska. (Zuzana Gabrižová, EURACTIV.sk)

Prague backs Serbia: Following a meeting with his Serbian counterpart Ivica Dacic, Czech Foreign Minister Tomáš Petříček (S&D) said the new European Commission should be more active in the Serbia-Kosovo dialogue and that the EU as a whole should also speed up accession talks with Serbia. “Czechia supports Serbia on its way to the EU. We are ready to share our experience with the accession process and EU membership,” Petříček said. (Aneta Zachová, EURACTIV.cz)

Last week, the ruling socialist party PSD forced three ministers to resign, but the proposed replacements have triggered fierce reactions. Particularly controversial is the nominee for the justice ministry, Eugen Nicolicea, who is one of the promoters of the justice law changes, which according to the EU Commission weaken the rule of law in the country.

After Iohannis’ refusal, PSD was forced to designate interim ministers from the current government. (EURACTIV.ro)

Surplus in 2018: The Croatian government has said the new 0.2% budget surplus in 2018 according to Eurostat (following a 0.8% surplus in 2017) is the “result of responsible managing of public finances, implementing reforms and stimulating investments”. The surplus in 2018 is considered a real achievement because the government had to pay guarantees for shipyard Uljanik. The public debt stands at 74.6% of GDP but it is falling rapidly. (Željko Trkanjec, EURACTIV.hr)

Prioritising multilateralism: Slovenian Minister of Foreign Affairs Miro Cerar told ambassadors that for Slovenia, “effective and rule-based multilateralism, which ensures stability, predictability and regulated relations”, remains a priority. He emphasised the need for better relations with the US but said Ljubljana would continue to build good relations with Russia as well. (Željko Trkanjec, EURACTIV.hr)

Demarcation one of the options: Speaking at the Jahorina Economic Forum, Serbian Prime Minister Ana Brnabić said the border demarcation with Kosovo had never been on the agenda, but that it is one of the options. She said that Priština had not been complying with the Brussels Agreement for six years, even though Belgrade had fulfilled all its obligations. She also criticised the EU, saying that despite being a guarantor for the agreement, it had not done anything to make Priština comply with it. (Beta-EURACTIV.rs)