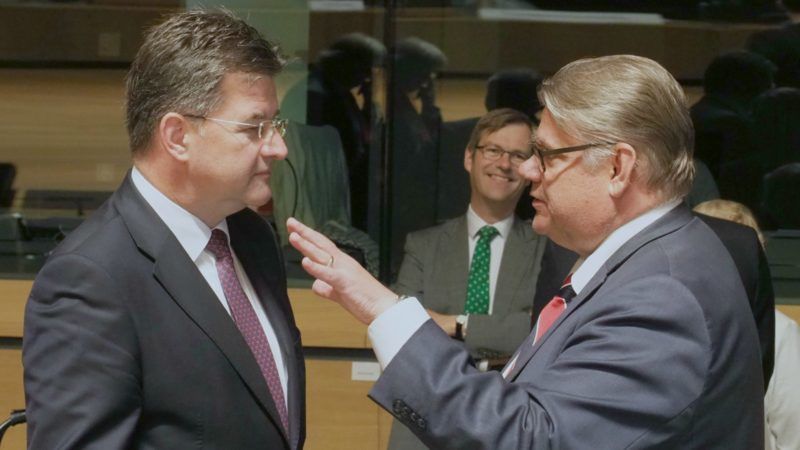 EU and NATO have often been described as two strangers living in the same city. Brussels hosts NATO headquarters and is home to the main EU institutions but the two organisations agreed the first ever Joint Declaration during the July 2016 NATO summit in Warsaw.

The Joint Declaration outlined seven concrete areas where cooperation between the two should be enhanced. Additionally, in December 2016, 42 proposals for implementation were agreed, as well as bi-annual reporting.

Today ministers state that this new cooperation has delivered substantial results, in particular in countering hybrid threats. A European Centre for countering hybrid threats has been set up in Helsinki. Finland has a 1,300-km border with Russia, which has been accused of mounting “hybrid” campaigns in the Ukraine conflict – combining conventional and unofficial military means with cyberwarfare, propaganda and other indirect tactics.

Finland plans to set up centre to counter 'hybrid' threats

The first ever Joint Intelligence Assessment on a hybrid topic between EU and NATO will soon be made available, ministers state, adding that support has been provided to Eastern partners (EU’s neighbours Moldova, Georgia and Ukraine), as well as to the Western Balkans. Russia makes no secret that it considers some of the Western Balkans countries its own backyard.

Closer interaction in countering cyber-attacks is reportedly progressing. For the first time, NATO and EU staff are expected to conduct joint exercises in response to a hybrid scenario.

An EU diplomat told EURACTIV that some EU countries were pushing to go “beyond the 42” agreed measures while others said “let’s stick to the 42”. But the diplomat called this a “side show”; the essential being, in his words, that the cooperation between EU and NATO was widening and deepening.

The most important thing, in his view, was the increasingly routine nature of the EU-NATO staff-to-staff contacts at formal and informal level.