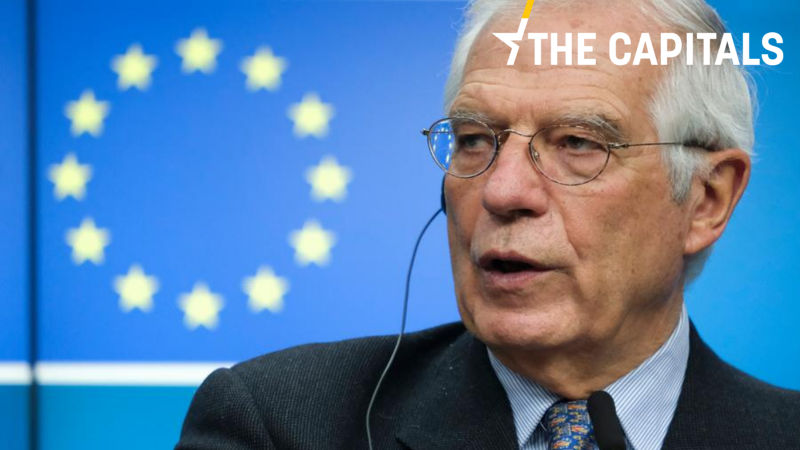 The official emphasised that the EU has already cut a lot of EU pre-accession funds for Ankara and added that a member state has asked the full withdrawal of Turkey’s EU membership. [Shutterstock/Alexandros Michailidis]

Before you start reading today’s edition of the Capitals, feel free to have a look at the Special Report ‘Enlargement agenda: Investment plans, reforms and elections‘ by Vlagyiszlav Makszimov.

With two years since the GDPR was implemented in the EU and the EEA, Finbold published a study on Tuesday (25 August) looking at how EU member states and their data protection authorities compare when it comes to imposing fines and penalties under the GDPR. It found that the most common GDPR violation pertained to having insufficient legal basis for data processing. See more here.

EU chief diplomat Josep Borrell will present a toolbox of “options” for Turkey which will be broader than sanctions, a senior EU official said in Brussels on Tuesday.

At an upcoming meeting of EU foreign ministers in Berlin (27-28 August), Borrell will present options for the EU to deal with Turkey overall: from the illegal gas drillings in the Eastern Mediterranean to migration and Ankara’s involvement in Libya and Syria.

Sanctions against persons and legal entities will be part of the discussion. Athens has asked for sectorial sanctions hitting Turkish banks. But the executive’s proposed options “will be something broader than sanctions,” the official said.

The official emphasised that the EU has already cut a lot of EU pre-accession funds for Ankara and added that one member state has asked the full withdrawal of Turkey’s EU membership prospect.

No final decision is expected in Berlin but an in-depth discussion. How far could the EU go? Sarantis Michalopoulos has the details.

Holiday returnees reluctant to test. Since 1 August, 13,000 travellers have returned from a red zone to Brussels, but only 40% of them have been tested  – a rate which is lower than in other Belgian regions, where the average is 60% tested, according to figures communicated by the head of the countries’ hygiene inspection. (Alexandra Brzozowski, EURACTIV.com)

No free masks for students. While wearing masks has been made mandatory for middle and high schools to kick off the new school year, the state will not provide them free of charge, President Emmanuel Macron and Prime Minister Jean Castex decided at the Elysée Palace on Tuesday morning, despite the demands of the opposition. The decision should be made official at the Council of Ministers today. Health Minister Olivier Véran nevertheless stated last weekend that “the distribution of 53 million free masks to people in precarious situations had been carried out by the Post Office”. (Anne Damiani | EURACTIV.FR)

UK moves towards domestic due diligence bill. UK businesses will be required to show that their products and supply lines are free from illegal deforestation, under a proposed new law. Meanwhile, the draft due diligence law will force large firms to show where commodities such as cocoa, soy, rubber and palm oil originated from. EURACTIV’s Benjamin Fox has more.

Finnish economy bounces back. Finland’s seasonally adjusted GDP saw a 3.2% drop in the second quarter of 2020, according to Statistics Finland, while back in May, the national banks and other economists had predicted the economy to take a 10% hit.

This means that following the health crisis’ ravaging impacts on European economies, Finland’s economy, which relied on a smooth transition to remote working and digital skills, appears to be the EU’s top performer, according to Eurostat figures. EURACTIV’s Pekka Vänttinen reports from Helsinki.

After Lithuania reported that a Belarusian helicopter had entered the country’s airspace while some 50,000 people formed a human chain during the Freedom Way demonstration to show solidarity with protests in the neighbouring county, Lithuania sent Belarus a diplomatic note about the incident. Meanwhile, Belarus said it had to use Mi-24 helicopters to stop balloons from entering Belarusian territory and handed its own note of protest to Lithuania in response. (Benas Gerdžiūnas | LRT.lt/en)

Sánchez rules out new national state of alarm. Spain’s Socialist Prime Minister Pedro Sánchez ruled out declaring another national state of alarm following his first cabinet meeting after the summer vacation. He has, however, confirmed that regional governments had the power to request a localised version, if necessary. Read the full story by EFE with EPA in English, here.

No dialogue under threats. The obsession with delinquency leads nowhere, Foreign Minister Nikos Dendias said in reference to Turkey after meeting with his German counterpart Heiko Maas on Tuesday.

Dendias stressed that instead of de-escalation moves, there are new provocations while noting that these behaviours and moves undermine stability in the region and constitute a violation of international law. Read more on Athens-Macedonian News Agency.

Foreign minister answers graft questions, sort of. Foreign affairs and trade minister Péter Szijjártó told journalists on Tuesday (25 August) that for him “compliance with the law is not a seasonal issue,” which he has always followed, emphasising the clear distinction he draws between private and public life.

Questions about Szijjártó’s holidays emerged after investigative journalism website Átlátszó.hu revealed photographs of him spending his holidays in the Adriatic sea on the yacht of pro-government billionaire businessman László Szíjj while the foreign minister’s social media accounts were showing photos of him at work. Szijjártó did not answer journalists’ questions on how he financed the trip, repeatedly saying that he enjoys the “rights relating to private life.”

In other news, schools in Hungary can reopen as of next week starting 1 September for the first time since mid-March based on fresh COVID-19 data, state news agency MTI reported on Tuesday, citing Human Capacities Minister Miklos Kasler. The minister said the government had worked out a protocol on social distancing, the use of sanitisers and common areas for schools to follow. For the first time in the country’s history, all students this year will receive free textbooks, meaning about 13.5 million textbooks will be delivered to more than 4,000 schools by Friday (28 August). (Vlagyiszlav Makszimov | EURACTIV.com; Željko Trkanjec | EURACTIV.hr)

Bratislava steps up COVID-19 measures. Slovak capital Bratislava is tightening anti-coronavirus measures after a recent spike in confirmed cases of COVID-19 turned the capital into an epicentre for the second wave. In a preventive move, visits to old-age homes will be restricted, testing of key personnel will be conducted and social services will be strengthened. (Zuzana Gabrižová | EURACTIV.sk)

New ministers to be confirmed on Wednesday. Polish President Andrzej Duda will appoint Adam Niedzielski as the minister of health and Zbigniew Rau as the minister of foreign affairs, after their predecessors resigned last week in a large-scale cabinet reshuffle.

Rau is currently an MP for the ruling Law and Justice party and the head of the Parliamentary Committee on Foreign Affairs. A law professor and a former governor of the province surrounding Lodz, he has little experience in diplomatic service.

Niedzielski is an economist and manager specialising in financial management and strategic management, who had previously been general director of the ministry of finance and a board member of the National Health Fund. (Alexandra Brzozowski, EURACTIV.com)

Free travelling cannot be ensured. As the number of coronavirus cases is rising, the Czech Republic could issue a warning against travel to Croatia, Foreign Minister Tomáš Petříček (S&D) admitted. “Future of free travelling to Croatia cannot be ensured now,” said the Czech diplomacy chief. In mid-August, 35 Czechs who returned home from holidays in Croatia tested positive. Croatia is among top holiday destinations for Czechs, currently, there are no restrictions on travelling to this southern country. (Aneta Zachová | EURACTIV.cz)

Party president loses confidence. The central political body of the Democratic Party of Pensioners of Slovenia (DeSUS) voted against the party president and Slovenia’s current agriculture minister, Aleksandra Pivec, as 19 party members voted in favour and 33 against. The party that has been the kingmaker of Slovenian governments since 1996 is now split, with the situation being legally unclear but politically transparent.

The MPs who voted against Pivec promised they would continue to support the government of Prime Minister Janez Janša, who will have to find a replacement for the current agriculture minister. (Željko Trkanjec | EURACTIV.hr)

Another huge step towards reconciliation. President Zoran Milanović attended on Tuesday a commemoration to mark the murder in August 1995 of six elderly ethnic Serbs in the village of Grubori in the aftermath of military operation Storm that ended Serb rebellion and said it had been a moral disaster that caused harm to Croatia.

This year, for the first time, members of the Croatian government attended the commemoration, while Deputy PM Boris Milošević, who represents the Serbian community, attended the celebration of Operation Storm on 5 August, and was also present at Grubori.

EURACTIV Croatia’s Željko Trkanjec looks into what seems to be a huge step toward reconciliation between Croatia and its Serb minority, which had rebelled against the country’s independence in 1991.

Germany, Serbia agree to improve partnership. Germany’s Economics and Energy Minister Peter Altmaier and Serbian President Aleksandar Vucic agreed on Tuesday on an administrative partnership for the purpose of improving areas of mutual cooperation and forging stronger ties between Serbia and the EU’s internal market, the German government has announced. EURACTIV Serbia has the details.

Meanwhile, the next expert meeting within the political dialogue between Serbia and Kosovo will be held on Thursday (27August), Nabila Massrali, a spokeswoman for the EU for foreign and security policy, was quoted as saying by Radio Free Europe (RFE). Read more.

How convenient. Montenegrin Prime Minister Duško Marović opened yesterday five km of a reconstructed road from Podgorica to Danilovgrad ahead of the elections next Sunday. Opening infrastructure facilities just before the elections appears to be quite common in the Western Balkans as politicians believe people appreciate evidence of good work more than political programmes. (Željko Trkanjec | EURACTIV.hr)

Von Cramon wrote that some EU member states were not satisfied and that the German ministry had identified three main obstacles, which include results in the fight against organised crime and corruption, anti-corruption legislative measures and work of government agencies, as well as a high rate of visa refusals as an important indicator for migration risks. However, the MEP did call on the German EU Presidency to be agile and abolish visas. (Željko Trkanjec | EURACTIV.hr)